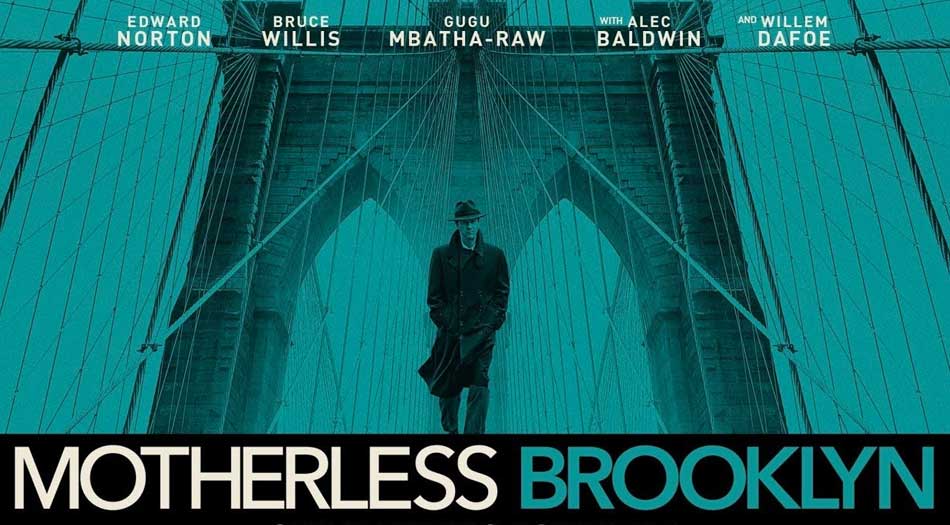 If you’re an Ed Norton fan, and I can’t imagine you’re not, he will not disappoint you with his latest directorial effort, which he also wrote the screenplay for, ‘Motherless Brooklyn.’ Doing double duty behind the camera wasn’t good enough; he also stars in it and turns in another exceptional performance.
He plays a detective named Lionel, in a film substantially steeped in noir; so much so it was shocking it wasn’t in B&W. There’s also more than a hint of Polanski’s ‘Chinatown’ here, too. Based on the novel by Jonathan Lethem, this crime drama is, fittingly, set in 1950’s New York, which is the perfect backdrop for our well-crafted characters. So well crafted I smell, at the very least, an Oscar nomination for Norton is on the horizon.

Lionel is a man who’s seemingly in a race against the clock, a tone you can’t help but pick up. He’s attempting to solve the murder of his boss and friend, the gruff private investigator, Frank (Willis). By the way, he’s not in the movie very much, and the film is the poorer for it.

Anyway, Lionel has Tourette’s, but the affliction doesn’t stop him from going out on his own to find who killed Frank. Tourette’s Syndrome is an illness that affects the brain, in which the person afflicted cannot control certain tics. Unwanted sounds, repeating of words or movements, even cursing, happen for no reason, often to the chagrin of the sufferer. What I appreciated most about Norton’s performance was how he was able to show this without drawing too much attention to the disorder his character has, while at the same time, very much making it a large part of who he is.

I’ll keep secret the most tantalizing parts of the film for you but will say that our gutsy gumshoe discovers that baby-kissing politicians and corrupt real-estate developers are linked to Frank’s death. The more and more Lionel digs, the more dirt he pulls over his own grave. By that, I mean that this is also where the film falls some. What Lionel is doing is noticed. It’s obvious, but, oddly enough, nothing really is done about it. Keep in mind that Frank was killed for looking into what Lionel is looking into. There’s something about the continuing storyline, while still entertaining, doesn’t ring true. Alec Baldwin, as Moses Randolph, is a fantastic villain. The supporting cast advanced the story beautifully, and the dramatic, mysterious, yet humorous, dialogue was outstanding. However, what was the most frustrating was that the pace, even around all these well-placed elements, wasn’t on par with the rest of the experience. The story wanders off in several different directions, but if you can keep your mind from doing so, ultimately, you’ll enjoy the film. There was no reason for the two hour and thirty-minute time frame the movie bears. ‘Motherless Brooklyn’ would be significantly improved had it been a more manageable length. Though it had its issues, I have to say that Norton’s for the screen translation of the source material is captivating enough to see on the big screen this weekend.