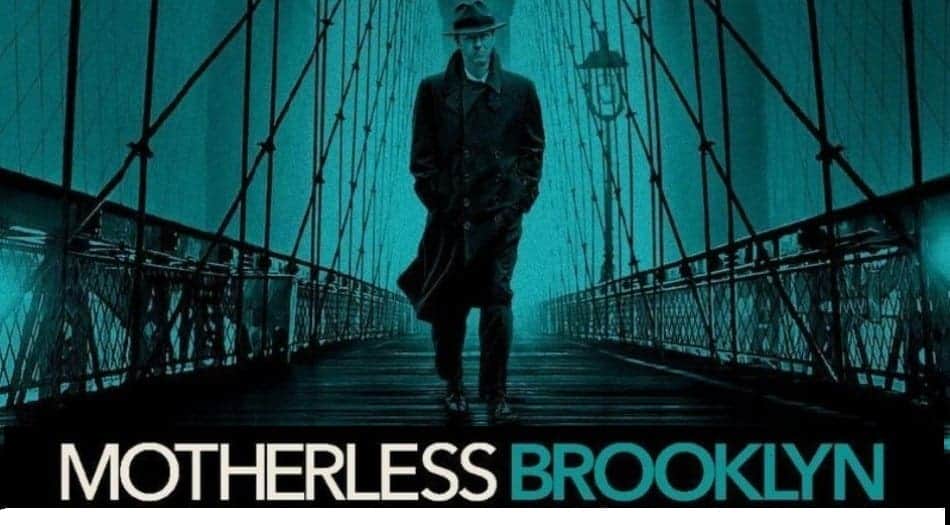 “Motherless Brooklyn” is a movie set in 1950’s New York, but the unmistakable location is “Chinatown”. Based on a novel from the 90’s (and also set in that time period), this version makes a jump to the ‘Film Noir’ Big Apple borough period, with wide lapel coats and fedoras all around. It is detective story, wrapped up in big city corruption and vice. So, the connections to the movie “Chinatown” are easy to spot. Big Money, Big Government, Big Problems. The interesting thing with this movie is that the main gumshoe has a photographic memory, but he also suffers from Tourette’s syndrome. This is the (as yet unnamed) condition of occasional twitching and uncontrolled vocal outbreaks.

Lionel Essrog (Edward Norton) is the twitchy Private Eye, working for a good friend Frank Minna (Bruce Willis). Frank relies on Lionel to mentally keep track of the audio of a big meeting that Frank attends. Frank is in over his head, but he keeps the details under his hat. It all goes south and Frank dies in a shoot-out. Lionel and the other PI’s at Frank’s firm are shocked. The few things that Lionel remembers from the audio are etched in his mind. He begins tracing back to see what Frank was doing there at that meeting. There are clues about the city Planning and Zoning chief, and a ‘colored’ secretary in the department.

Lionel tracks down Laura Rose (Gugu Mbatha-Raw) and finds out that she is working with Gabby Horowitz (Cherry Jones). That was another name that Lionel knows from Frank’s final meeting. These two women are working against Moses Randolph (Alec Baldwin) who is a city Redevelopment Commissioner. Moses is planning of tearing down many of the ‘Negro’ neighborhoods to put up major construction projects. There is nothing known publicly about Moses that would put him into a public scandal. And he wants it to stay that way. Frank may have found some information that could change that condition.

Laura and Lionel hit it off pretty well. But since Lionel stole some guy’s press pass, and he is passing himself off as a journalist – he is not being fully truthful with her. Her father owns a ‘hot’ jazz club in Harlem, and she invites him there. Lionel pulls on every loose thread that he can find, because he knows there is something about the story – he just does not know what he will find. He does find another down-on-his-luck guy who looks homeless. But it is Paul Randolph (Willem Dafoe), and he is Moses Randolph’s brother. They have had a falling out, and the brother with all the power will give nothing to his less fortunate sibling.

Lionel, and some of the other detectives, are getting threatened. Sometimes they have been beaten up by some unknown assailant. Tony Vermonte (Bobby Cannavale) is attempting to keep Frank Minna’s business going, but it has become just too dangerous. Tony wants Lionel to stop going around and snooping into things that are getting the boys in trouble. Lionel wants to continue to help keep Laura Rose safe, because most of mystery might involve her. She does not know all the answers, but she does know that Lionel is looking as hard as he can.

Edward Norton did the screenplay and he directed this movie. He also plays the main character (Lionel). He did a terrific job with the on-screen portrayal of a troubled man with a medical condition that hurts him more than it helps. In terms of the screenplay, he made a decent ‘Film Noir’ type story by changing the events to have them occur during the peak of ‘Film Noir’ movies. However, the direction gets very draggy right in the middle section, and the ending does not have the type of punch that you would expect (See: “Chinatown”). Norton’s acting is superb, and he gets a very good group of actors together with very good results. Gugu Mbatha-Raw stands, and Alec Baldwin is good – up to the point that he starts to mimic Donald Trump. Willem Dafoe gives an intense performance as the troubled brother of the most powerful man in New York.

“Motherless Brooklyn” is a twist on the old movie “Chinatown”. The Rich and Powerful always use their Power and Wealth to screw over the little guy. But in this movie the little guy gets a chance to fight back, or at least not get roughed up too badly…