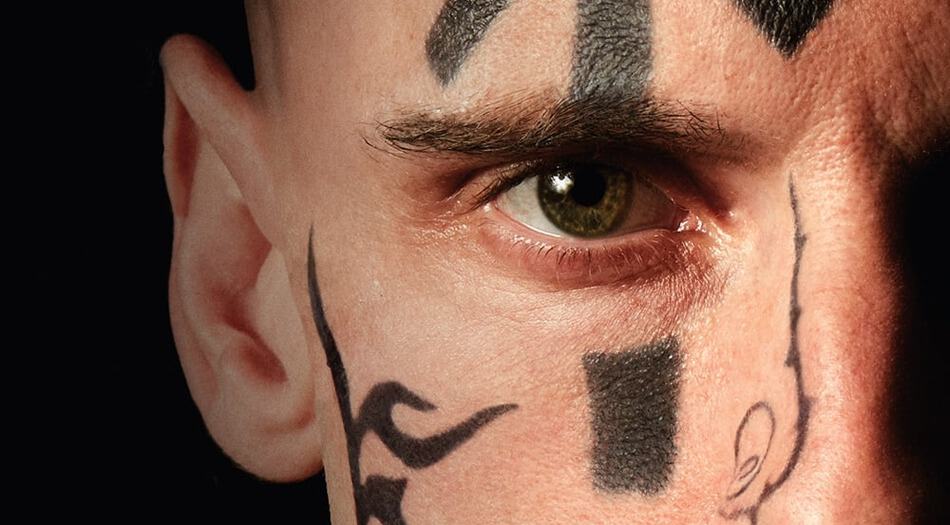 ‘Skin,’ from A24 & DirecTV, is based on a documentary released by MSNBC back in 2012 about a skinhead named Bryon ‘Babs’ Widner, played with exceptional passion by Jamie Bell who, like usual, settles into the role with ease, possibly securing himself an award of one kind or another. The timing of this movie couldn’t be better. Maybe the vulnerable young men and women who are born into these lives, who think there’s no way out, can see this and know that there IS. Early into his adulthood, Bryon’s already on the FBI’s most-wanted list and this film is about his journey out.

I said all that to say this, we’re not born racists; it’s taught to us. One thing that director Guy Nattiv makes clear right away is the fact that the children in these families don’t know any better. The first shots are of the young Bryon getting his head shaved by a tattooed hand. Then we see the natural progression of that which is to grow up keeping your head shaved, covering your face and body in tattoo’s that speak to your white power preferences. Next is getting involved in blood-drinking rituals to become a full-fledged member of the group. That group is his who his family is. They’re called the Vinlander’s Social Club, run by his surrogate parents who are extremely, unsophisticated and barbaric. They are Fred (Camp) and Shareen (Farmiga) who pulled him off the streets as they do the rest of the boys and men involved in the club.

The next scene we see is in 2009. White Supremacists, including the now-adult Bryon, march across a bridge in Columbus Ohio shrieking racists chants such as, ‘Blood and Soil!’ and ‘Whose streets?! Our Streets!!’ Police in riot gear stand near, ready for a brawl. We then see that African Americans activists cover the other side of the bridge. They scream back that they don’t want Fascists and the KKK in their city. They also try to drown out the Neo-Nazi’s with shouts of ‘USA!’ It’s quite a scene once the crowd gets out of control. It’s not long before two men lose their temper and Bryon and a friend ends up chasing a fourteen-year-old boy into an ally. They do this because the boy stabbed one of their group members. In return, they cut his face. This is a very bold scene which speaks to the times we’re living in. It brings back memories of what happened in Charlottesville, Virginia in 2017. It doesn’t pay tribute to Heather Heyer, as Spike Lee did in ‘BlacKkKlansman,’ but it does remind us of the division that’s going on in this country today.

We next see Bryon at Nordic Fest where he meets Julie (Macdonald). Something snaps inside Bryon while he watches the different factions of White Supremacists get into a fight over differences of opinions. Perhaps he tries to impress Julie because he jumps into gear and assaults the loudest and biggest member of the Aryan race. He uses the man’s attack on Fred as an excuse to almost choke the man to death but in reality, Bryon seemed insulted that he believes they’re the Master Race and everyone else needs to leave the country.
What’s so special about the film is watching Bell’s transformation from the Bryon we see in some of the opening scenes to the one after he meets Julie and her three daughters. In them, he envisions a life beyond the violence, hate, and control he’s living now and you can see it in his eyes.
It’s lucky for him that after meeting Julie, he is arrested and meets another person who helps him evolve. That person is Daryle Lamont Jenkins who runs the ‘One People’s Project,’ an anti-hate group that helps white supremacists break free if they help expose some who are still active in the movement. Daryle has a board with pictures of people that he’s ‘turned.’ Because of Julie and his strange behavior, Fred suspects there’s something up which puts Julie and the girls in danger. He has no choice but to leave and try to save them. Giving Daryle information is the only way to survive. Once the Vinlander’s go after Julie and more reality hits Bryon, he speaks with Jenkins and starts to give up even more information about the people he once loved. Daryle then sets Bryon up with someone who can remove the tattoos that, in various ways, stand for Nazi’s and the KKK. This painful procedure is shown in moments throughout the film. It’s scary to know that these groups exist and how they go about getting new members to their group as shown when new probate Gavin is found. I hope America can one day move beyond this kind of racism but for now, it’s good to know that people like Daryle Jenkins are there to help find the Bryon’s of the world.

*Stay seated during the credits for footage of the real people.