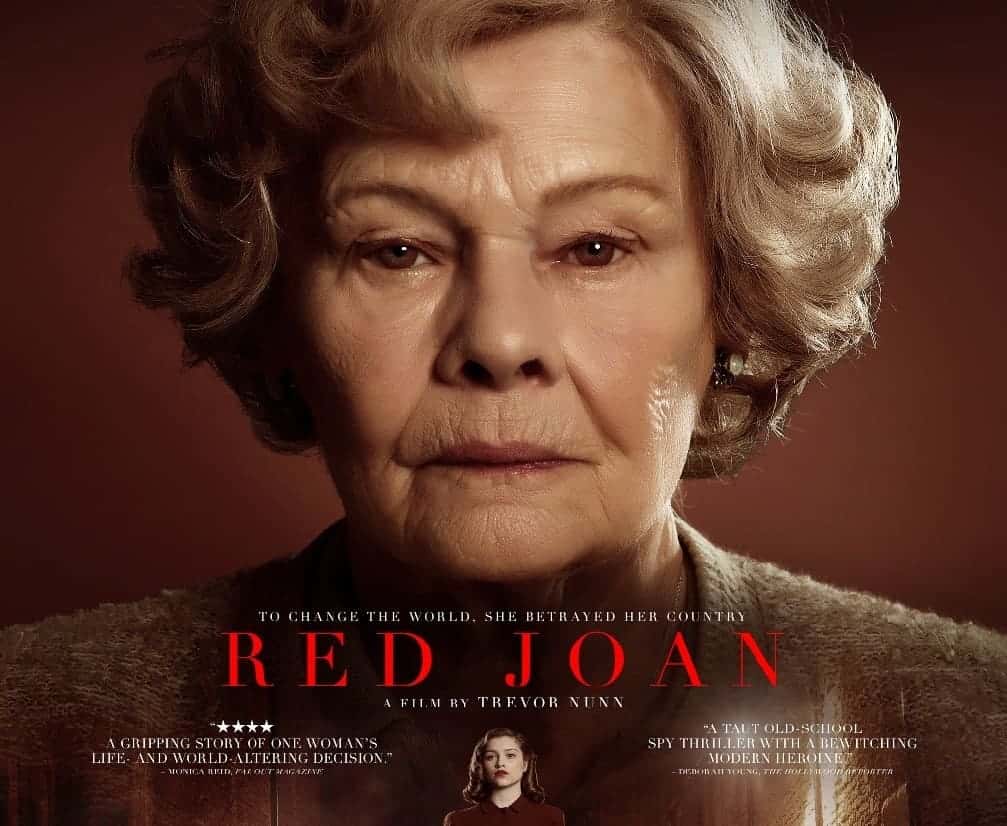 Admittedly, as we go about our daily lives, national security isn’t something we tend to have to think about. Luckily, we’ve never had to truly worry we’re about to be invaded nor have we had to wonder about the ‘IF’S.’ ‘If that happened what would I do?’ ‘If that happened, could I do this?’ One of the biggest questions someone could face is, ‘What would you do for your country?’ ‘Red Joan’ examines the theme by telling us the story of the woman who was tasked with answering that question.

We haven’t heard of her in America, but she’s known, most certainly in the UK, as the ‘Granny Spy.’ Her real name was Melita Norwood, someone you may want to look up before or after the movie. In the film, she’s Joan Stanley (Dench). When we meet her, she’s in her 80’s, she’s friendly, unassuming and tending to her charming British garden. Quickly after she’s being introduced to us like this sweet, innocent, granny-like figure, there’s a knock on the door and she’s suddenly in handcuffs. We learn it’s alleged she was a KGB spy. Overwhelmed, but not sorry she had done it, she admitted she was guilty of giving, to the Russians, research the British government had done on the Atom bomb. There are a few clues before Joan opens the door, so pay attention to everything that’s going on… and continue throughout the film. When Joan’s arrested, it’s for twenty-seven breaches of the Official Secrets Act. Treason. They then take her away and interrogate her. We learn everything about her and what leads up to the moment at her front door through the use of flashbacks.

A file was started on Joan in 1938. The film travels back to see her then. No longer in her 80’s, Joan (Cookson) is now a physics student at Cambridge. While there, she meets new friends Leo (Hughes) and Sonya (Srbova) who, through words of hope, courage, action, and honor, compel her to join a group of young Communist who look good and speak well, selling to her their ideologies. Sonya is rowdy and fun but it’s Leo who intrigues Joan most. The audience is onto them right away. When she leaves school, she gets a job working on something very secretive. She has always wanted to change the world and is happy to know she’s working in her chosen field. When she finds out her work is to build a bomb, she’s deeply concerned she’s doing what’s right. After signing her life away to never give away the secret, her boss Max Davis (Moore) explains how they need to make a bomb before Germany does. They need the leverage.
By this time, she’s lost touch with Leo. He returns to fill her head with propaganda and tries to talk her into giving him everything she knows. She’s against the idea and gives him a firm, ‘No!’ However, while on a trip to Canada, she learns of America’s success with their bomb. This so shocks her that she decides to help even the playing field across the globe. She decides to get Leo the information he seeks. She later tells the world, at a press conference held in her front garden, that she wanted everyone to share the same knowledge to prevent a global catastrophe. When someone in the crowd shouts to her that she’s a traitor, she attacks the insult with force exclaiming that she loves and doesn’t believe in ‘working against one’s country.’ She did this to prevent another world war. She also says that when we look back at history, ‘you’ll see I was right.’

Judi Dench was perfect in this role. Underused in the ‘Granny Spy’ part of the story, you wish you could see more of her but what she does is essential and really isn’t needed beyond what you see. She’s passionate and with this performance, you know that in her heart she believes what she has to say. Cookson is impressive. Had they never added the eighty-year-old version of Joan, the film wouldn’t have lacked anything. Once she gave the secrets away, I would have liked to have seen more in that era but it was still a good movie and an interesting theory to ponder. Was she right in what she did? What if the Russians never received this information? Would they have gotten it another way or would the world be very different today? We’ll never know.