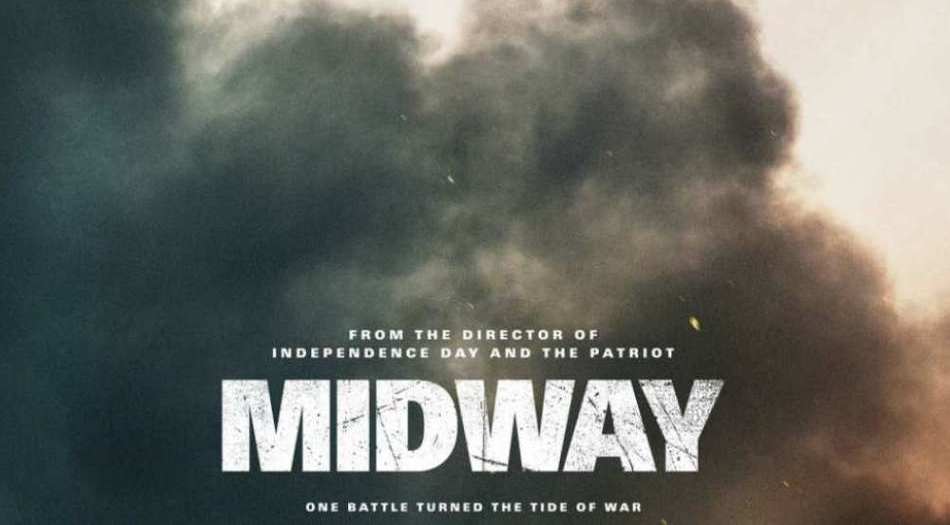 “Midway” is a throwback style movie of a great World War II battle, and they don’t them like this anymore. But this movie kinda shows WHY they don’t make them like this anymore. The important sea battle between American and Japanese ships and planes, just off of Midway Island, was a turning point in the War effort. The lead up and other battles in the War, including Pearl Harbor and Dolittle’s raid on Tokyo, are described and shown as other decisive points in the conflict. But based on the clunky dialog and wooden characters, the real people portrayed come off as just cardboard cutouts. When the bombs drop and the CGI explosions cover the screen, there not enough emotional depth to the people who served and died for America’s freedom.

Starting in Japan, a few years before 1941, Lieutenant Commander Ed Layton (Patrick Wilson) is an intelligence office dealing with the Japanese military. A war with America can never be won, if it lasts too long. If there is a short and hard strike against the U.S. – then Japan might have a chance to eliminate most of the Naval fleet. That would lead to Pearl Harbor, and the surprise attack on Dec. 7, 1941. America’ Navy was in ruins, but many of the aircraft carriers were out at sea and never got bombed. The USS Enterprise led by Vice Admiral William “Bull” Halsey (Dennis Quaid) has a top crew of flyboys. That includes Lieutenant Commander Wade McClusky (Luke Evans) and Lieutenant Dick Best (Ed Skrein).

The new chief at Pearl Harbor is Admiral Chester Nimitz (Woody Harrelson), who takes the thankless job of getting a Navy that is in tatters and bringing it back up to ship-shape (so to speak). He pushes everyone to do more and fight more. The nerds in Ed Layton’s intelligence group are busy cracking Japanese codes. They find that a big attack will happen at Midway Island. But before that happens, Lieutenant Colonel Jimmy Doolittle (Aaron Eckhart) leads a shock bombing raid over Tokyo, with help from the USS Enterprise. The Japan military thought that they would never be open to any attack, so they know that America is serious about winning this war. Doolittle’s Raiders make a powerful statement, and most of them get away, with help from the Chinese.

Midway is the place to be for a rumble in the Pacific. The Japanese fleet – including four of their aircraft carriers – is heading there. The US fleet, including a quickly repaired carrier USS Yorktown, is waiting for the Japanese to attack. The USS Yorktown and the USS Enterprise are both ready to bring down the hurt on the Japanese fleet. Machinist Mate Bruno Gaido (Nick Jonas) is on board the Enterprise ready to take on any Jap who would mess with his Jersey accent. There is going to be a hell of fight, and the side who can do most damage could be the side that will win the War. Many guns are fired, many bombs are dropped and quite a few torpedoes are launched to do some damage.

The US forces are taking quite a few causalities, and so are the Japanese. Each side is steadfast to hold their ground — er — whatever they hold on to when fighting on the high seas. McClusky’s team of torpedo planes does a lot of damage to many of the Japanese carriers. Dick Best leads his team of dive bombers to also attack the Japanese carriers. In fact, Best was the only person that day to successfully score direct hits on multiple carriers. Way to go, Dick! But there are more ships and more planes that are destroyed in the carnage. Many are American, but in the long run – a very strong strike was taken out on the Japanese fleet. They could only limp back to Japan with one intact carrier. This was a major turning point that set up the US Forces to become a dominant power in the Pacific.

“Midway”, this movie version, does a less than dominant job to portray these heroes with the honor that they deserve. It’s not that any of the actors are bad, but these are all mostly “B-movie” in style and ranking. There is no Clooney or Pitt or DeNiro here. These are decent actors, and many of them are quite good. But in this movie, the stilted language and dialog takes away any deep emotional power that they might have. The special effects for the combat are passable. It does not get to a level of “Saving Private Ryan”. It mostly seems closer to the action of “Independence Day”. With such so many characters, always coming and going, it gets difficult to tell one from another. The character development comes from a lot of War Movie stand-bys. The writer does not believe in the “Tomb of the Unused Movie Trope”.

So in this case, the movie does not fly up to the peaks of excellence, nor does it sink into the depths of Dave Jones’ Locker. Let’s just say it stays somewhere in the middle – sort of “Midway”.