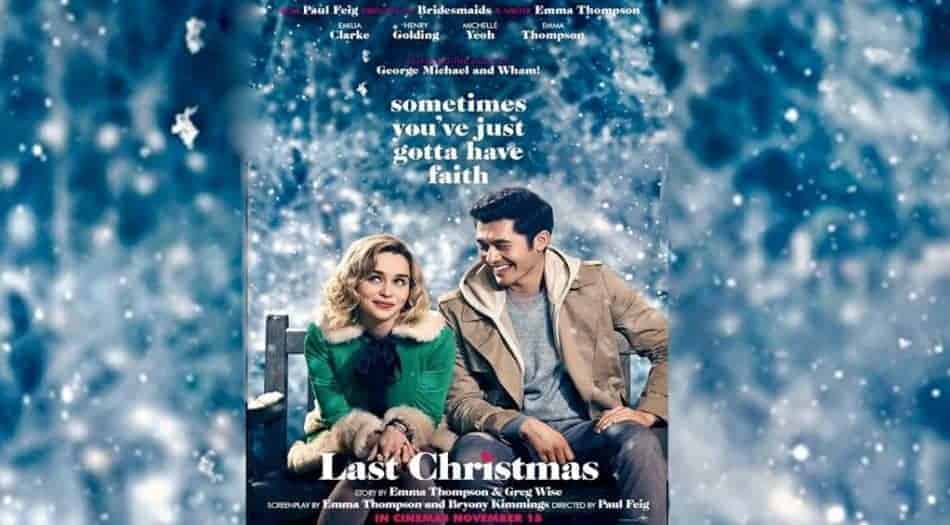 “Last Christmas” is a movie with a lot of heart, and that makes it special. Special in the use of the overwhelming charm of the two main lead actors (Emilia Clarke and Henry Golding). But also special in the use of the overwhelming charm of London, decked out in full holiday sparkles. It becomes as much of a lead character as the other two. Also, with a strong story and screenplay (with a lot of help from writer Emma Thompson) that takes a typical ‘girl meets boy’ romance and turns it into — well, something a little bit different. A romantic comedy set during the Christmas season in London — it is a rehash of “Love Actually”, right? No, this movie takes the George Michael staple holiday song and dashes through the snow to a new destination.

Kate (Emilia Clarke) is a young woman in London with some life issues. Her immigrant family is from Yugoslavia, and she is not feeling that she has a place in this world. Due to medical issues about a year ago, she is still out of sorts. Kate, who is called a more traditional Katrina at home, is scattered and not motivated. She refuses to live at home, because she does not get along well with her mother (Emma Thompson). The traditions of the homeland are distant to Kate, and she prefers singing auditions, drinking to excess and one-night-stands. She works at a charming little London shop that is a specialty store for all things Christmas. Her boss is a smart Chinese cookie, and she made her fortune — by having a lot of merchandise suppliers from China. She calls herself Santa (Michelle Yeoh), and Santa knows if you’ve been good or bad.

Coming up to the holidays, Kate is still aimless. She is crashing out at every friend’s house or hooking up just to get a room for the night. But when all those fall short, she must go back home again. She and her mother disagree (as usual), and Kate feels miserable. But then she meets Tom Weber (Henry Golding). He is outside the shop where she works, and he convinces Kate to always ‘look up’. It is his philosophy in life. He seems to come around again and again, and Kate thinks that Tom is some type of stalker. But he is just so darn nice to Kate. He always has time to listen to her gripe and complain. He works off and on to volunteer at a soup kitchen. He seems to be bright and happy and … perfect. So, Kate knows that there must be something wrong with him.

Kate had major surgery last Christmas and almost didn’t make it. But now, she thinks her dreams are all dashed. She is not a famous singer, just a lowly ‘elf’ clerk at the Christmas store run by ‘Santa’. But meeting Tom is making a subtle difference in her outlook on life. She is becoming kinder, and she helps ‘Santa’ out by getting her a boyfriend. She tries to help at the soup kitchen and becomes a welcome addition there. She makes amends with her older sister and tries to understand her mother. Everyone wants to know why she is attracted to Tom, because she never brings him around to meet her friends. He says he cannot make any commitments, and Kate is devastated. But there are some very good reasons why Kate owes a lot to Tom for changing her life. She just does not understand the biggest one…

When Emilia Clarke and Henry Golding turn on the charm spigot, there is no stopping how much cute, attractive and easy-going power comes out. It is like being wrapped up in a ‘blanket made of kittens’. They have enough charisma to fight back any odd thought of logic and continuity that might creep up. It does not matter that Kate could be a carbon copy of most Zooey Deschanel characters. With the bright Christmas lights shining, the city is all lit up. But even that wattage does not come close to these two. Clarke makes Kate’s struggle a real thing, and Golding makes Tom out to be a bright shining object that is just out of reach. The characters have an unusually deep connection, and it takes Kate a while to determine what that is…

“Last Christmas” has some strong writing with the fact that Emma Thompson takes a George Michael verse and builds an entire world on top of that. It is impressive to see that even some of the side characters have some distinct traits that make them unique. The direction flows effortlessly, and Paul Feig has made London a Christmas go-to capital. He even managed to get a number of George Michael and Wham! songs into the songtrack without making them sound forced. For being a movie that could feel like an inferior product compared to other English Rom-Coms (“Love Actually”, “Notting Hill”, “Bridget Jones Diary”, etc.) — “Last Christmas” goes down a new path.

“Last Christmas” is a welcome cup of warm mulled wine, where other Rom-Coms can sometimes feel like old stale fruitcake.