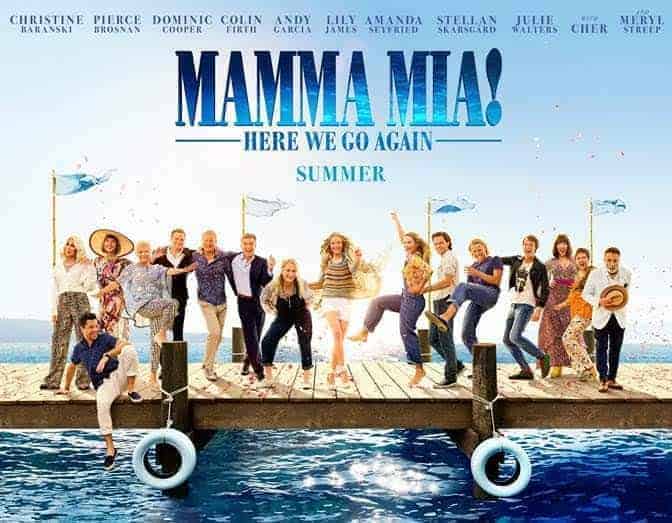 Mamma Mia! came out a decade ago in 2008. In that film, we meet Sophie, played by Amanda Seyfried, who, by the way, has the voice of an angel. Sophie is about to get married to Sky (Cooper) and she sends invitations to three men, Sam (Brosnan), Harry (Firth) and Bill (Skarsgård) who we learn were all close with her mother Donna, who’s played by the extremely gifted Meryl Streep.
Donna is unaware her daughter has done this, but the reason Sophie felt it important to invite these men is because she has never known her father. She wants her father to give her away at her wedding. Sophie found Donna’s journal and discovered that her mother had relations with these three men around the time she was conceived.
Quite sure it’s one of them, she hopes to find out which one when they arrive. That’s quite an idea for a story, especially a musical told using tunes from the incredible group ABBA. It worked, that’s for sure. The film was a big hit despite the fact that the actors’ cast were the singers, as well, or because of that very reason. They were spectacular and the film and soundtrack both magnificent. 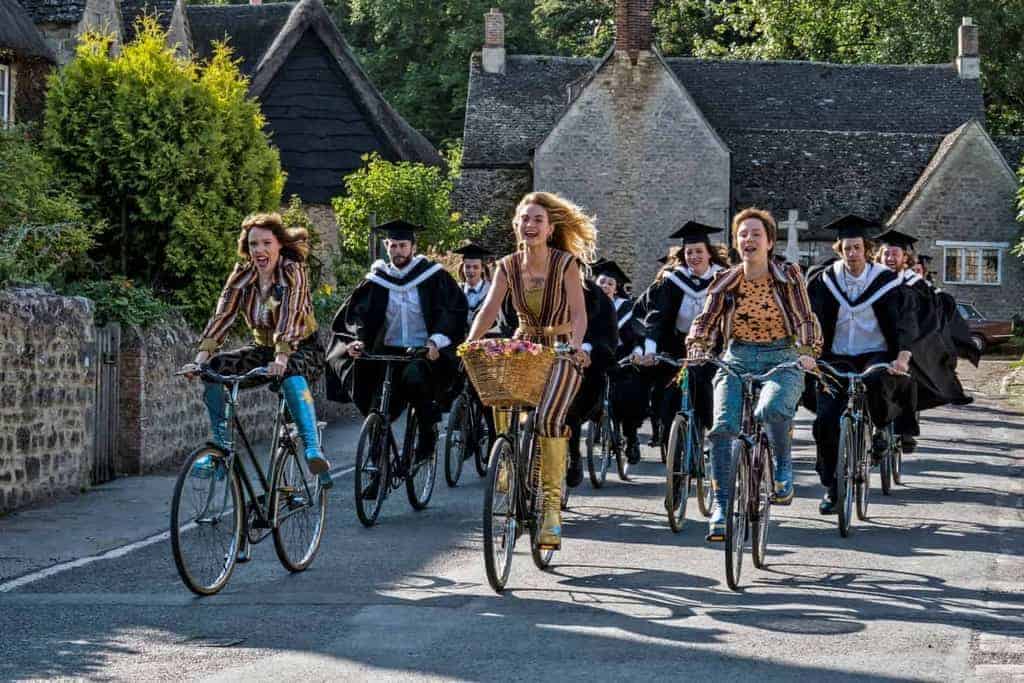 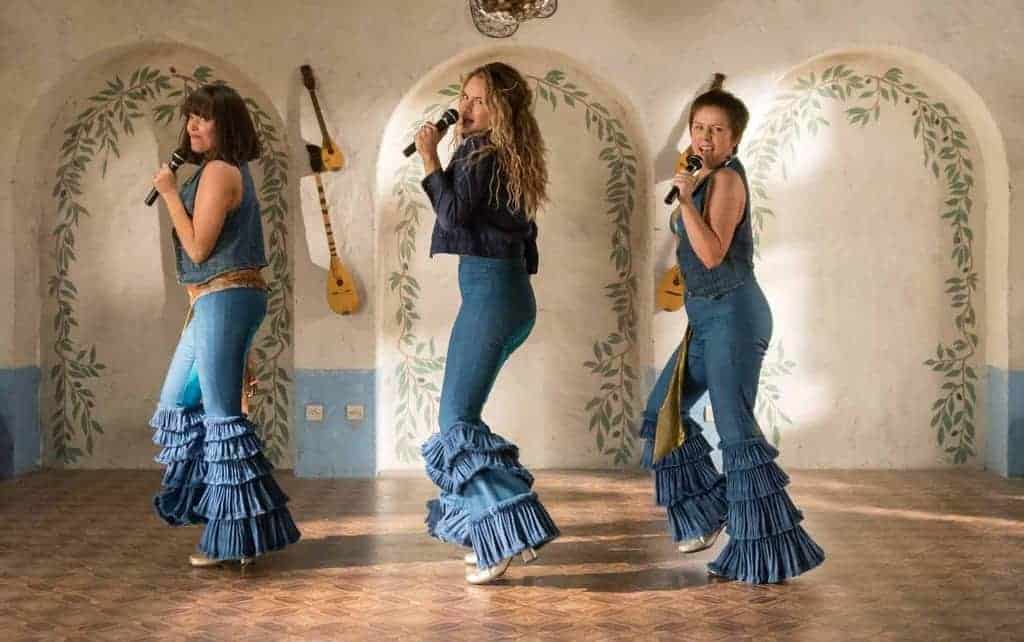 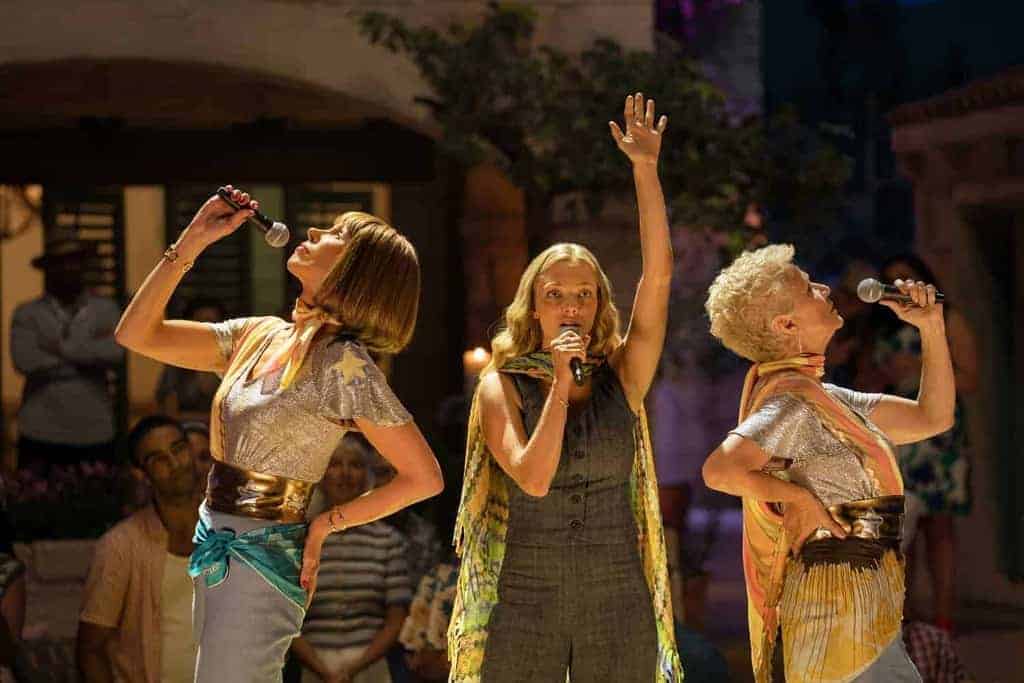 Since its success, everyone has been waiting for a second go around and it finally came with ‘Mamma Mia! Here We Go Again,’ which is fun in theory but just isn’t as good. But then again, how could it be? The original had a charm tough to match. This second film is a prequel telling the stories of Donna meeting Sam, Harry, and Bill. We meet the young Donna, a wild flower child of the 70’s, played wonderfully by Lily James, when she’s at her graduation. We also get to know her lifelong friends and backup singers, Tanya, played by Jessica Keenan Wynn, in for Christine Baranski and doing a bang-up job of it, and Rosie, played by Alexa Davies, who did a passable Julie Walters. You’ll love their characters as you did in the original.

Leaving her besties behind, Donna decides she’s off to tour the world alone. As she does, she doesn’t mind having an occasional love affair which is when we meet those three guys one by one. First, it’s Harry (Hugh Skinner), who distracts her in Paris. This is where they’re able to squeeze in a decent excuse for a fun rendition of ‘Waterloo.’ Next comes Bill (Josh Dylan), who, perhaps expectedly, has a boat when Donna runs into him. She uses him to get to her island destination. Then young Sam (Jeremy Irvine) enters, who as if waiting for her all along, is already on the island when Donna gets there. Fate, maybe?

What makes the film uncommon are the ABBA songs which fill each storyline, as they did before. Most are lesser known tunes but that doesn’t change the fact that they’re good songs, especially lyrically. Each song fits the situation well but none as good as ‘Fernando.’ Cher looked oddly uncomfortable in her performance, but she sings it beautifully. Andy Garcia, who plays Fernando, not so much. However, the situation that surrounds the two being a couple is quite comical.

As before, the vocals are well done but what you liked so well about the first movie simply isn’t there but that won’t stop you from enjoying yourself and singing along. What does is finding out that Meryl Streep’s Donna has passed away which creates a bit of a sadness in you, the audience member who expected to see her. Director Ol Parker came up with an ingenious way to bring her back into the fold, which helps you endear yourself to his particular vision. He uses a lot of callbacks throughout the entire film which helps you, as well, but at the same time, makes you wish you were just watching this first one instead. Rest assured that, even if that’s true, you have to see this. You may not watch or listen to it as many times as the first, you still have to see it once.