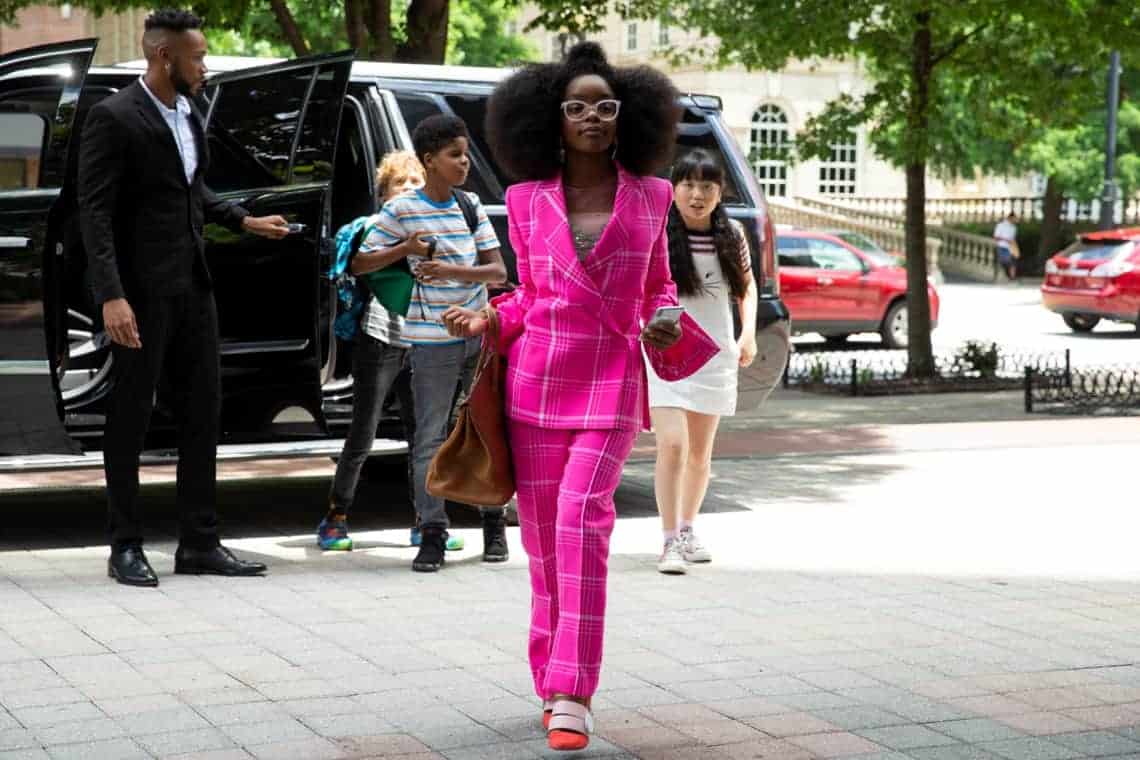 I was absolutely taken with the little dynamo in ‘Little.’ 14-year-old Marsai Martin (Black-ish), who’s also executive producer of the film, blew me away with her performance. The rest of the main cast was memorable with their well-rounded characters as well, but Martin had… ‘it.’ You’d be hard pressed to find someone her age with as much talent in the recent past… maybe ever. She can dance, she can sing, she can act… but she also writes, directs and produces. She pitched the idea for this movie when she was ten. TEN! Asked what she wants when she grows up, she responded, ‘I want to be a legend.’ Well, I’d say you’re well on your way.

In ‘Little,’ Jordan Sanders, played by the delightfully witty Regina Hall (Think Like A Man, Girls Trip), has a difficult time in Jr. High School. So difficult that she vows that when she grows up, she’s never going to be bullied again. Instead, she’ll be the bully. She’ll make sure she’s the boss and always in charge, especially of her feelings. No one will ever get close enough to hurt those feelings again. There’s a lengthy set up that gives you time to see how evil she’s become. No doubt the set up also gives poor Regina some screen time. You’ll be so dazzled by her tiny replacement and the high jinks written for the kid that you won’t miss her.

Jordan walks through her building and everyone runs to avoid being abused by her. One unlucky employee who has no choice but deal with her is April who’s played by actress Issa Rae from ‘The Hate U Give.’ Jordan likes to push her around because she thinks April is weak. She treats her as if she’s a used tissue but hoping to be able to move up in the company, April does her best to please Jordan while at the same time taking the brunt of the maltreatment for her co-workers. She makes sure Jordan gets her coffee at just the right temperature, warns everyone when she’s about to walk through the door so they can hide, and she also stashes the carbs, so Jordan doesn’t see them. These things usually do the trick, but things change when Jordan is given some bad news. She’s told that her biggest client is leaving unless she and her team can come up with a reason for him to stay. They have forty-eight hours. Hearing this, Jordan is particularly cruel and when she runs into a child who’s practicing a magic trick, she takes everything out on the enterprising enchantress.
This is where Regina Hall gets to release a line of dialog that had the audience rolling with laughter. Her Jordan snaps off an order to April to, ‘Get that little chocolate Hogwart out!’ Welp! That’s all it took. The little girl pulls out her wand, waves it and wishes Jordan to become little so that she can be put in her place.

As you would expect, the spell works overnight. Jordan awakens the next morning to discover that her ‘natural teardrop boobs’ are gone. She looks in the mirror and realizes she’s once again that little child who was always laughed at and tormented. 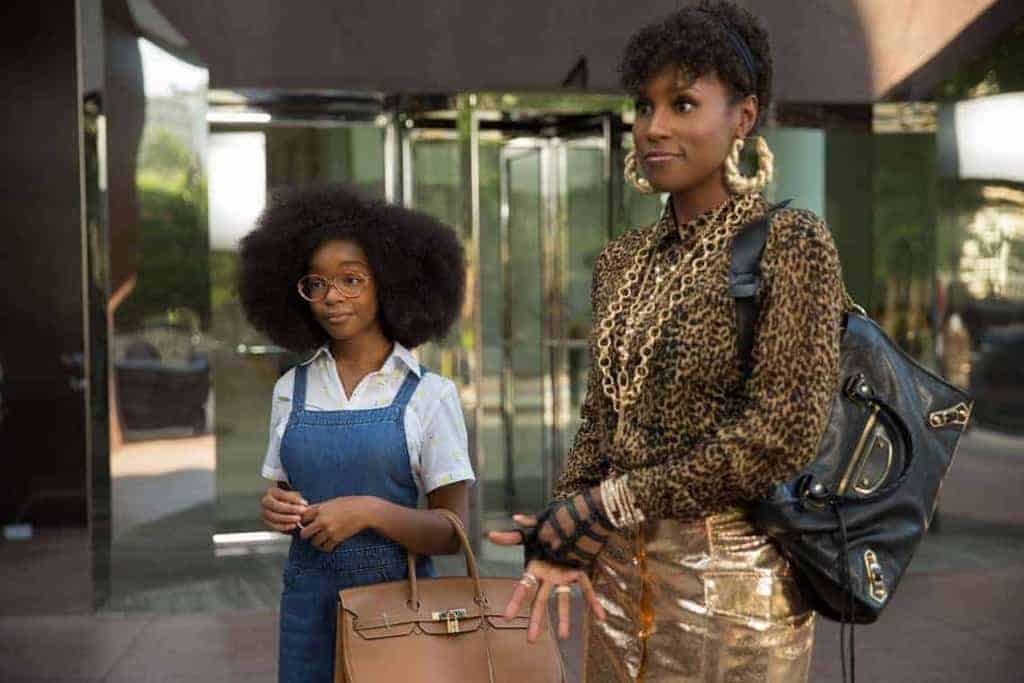 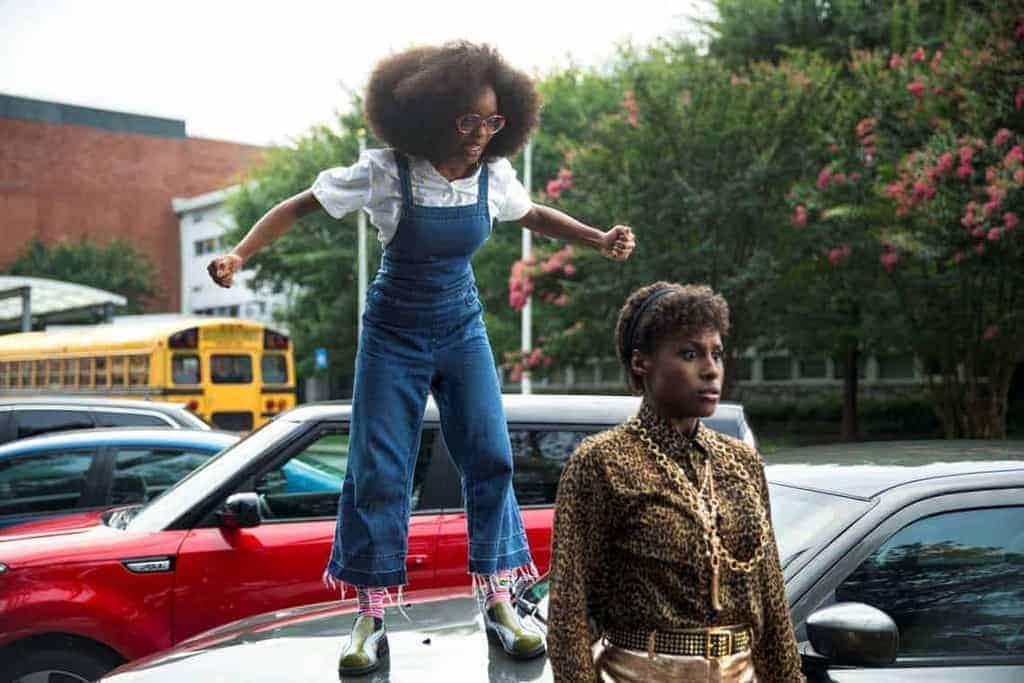 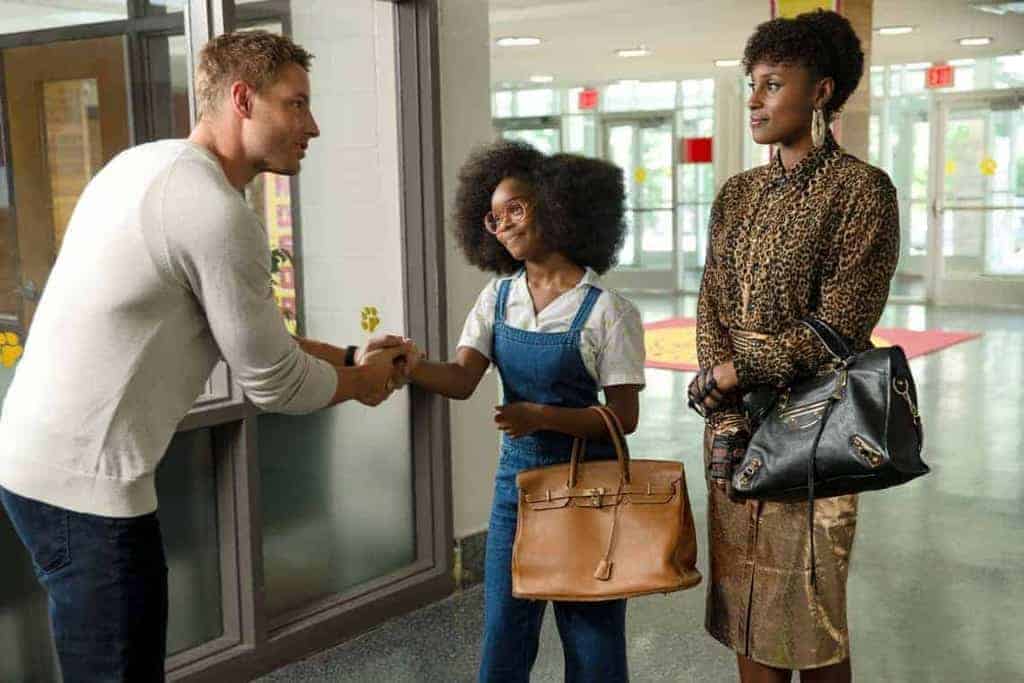 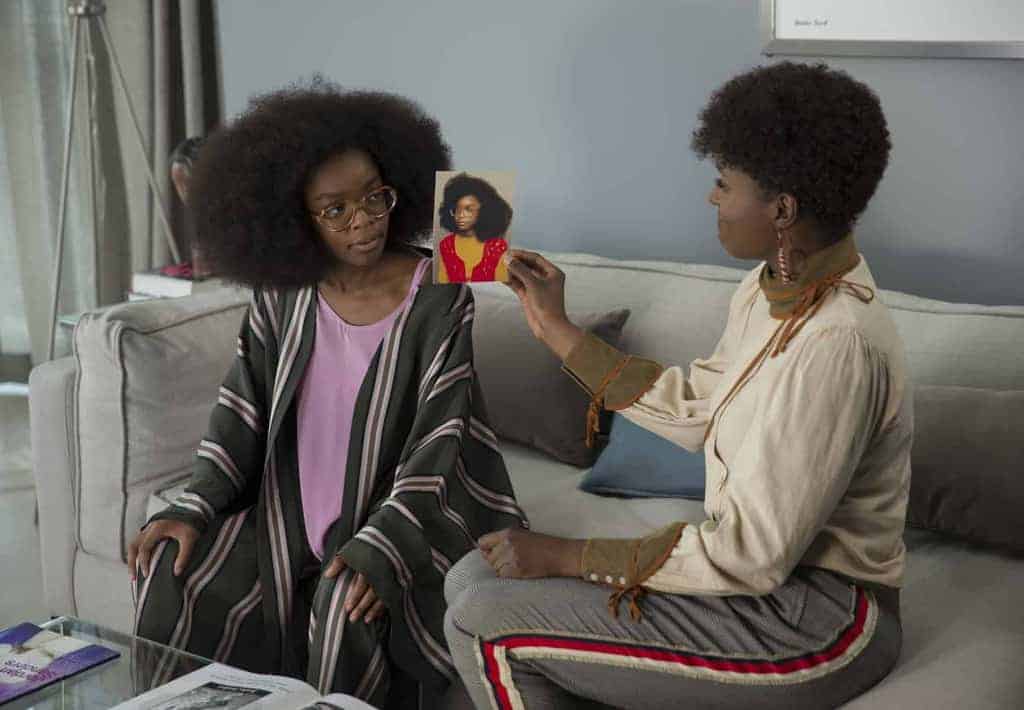 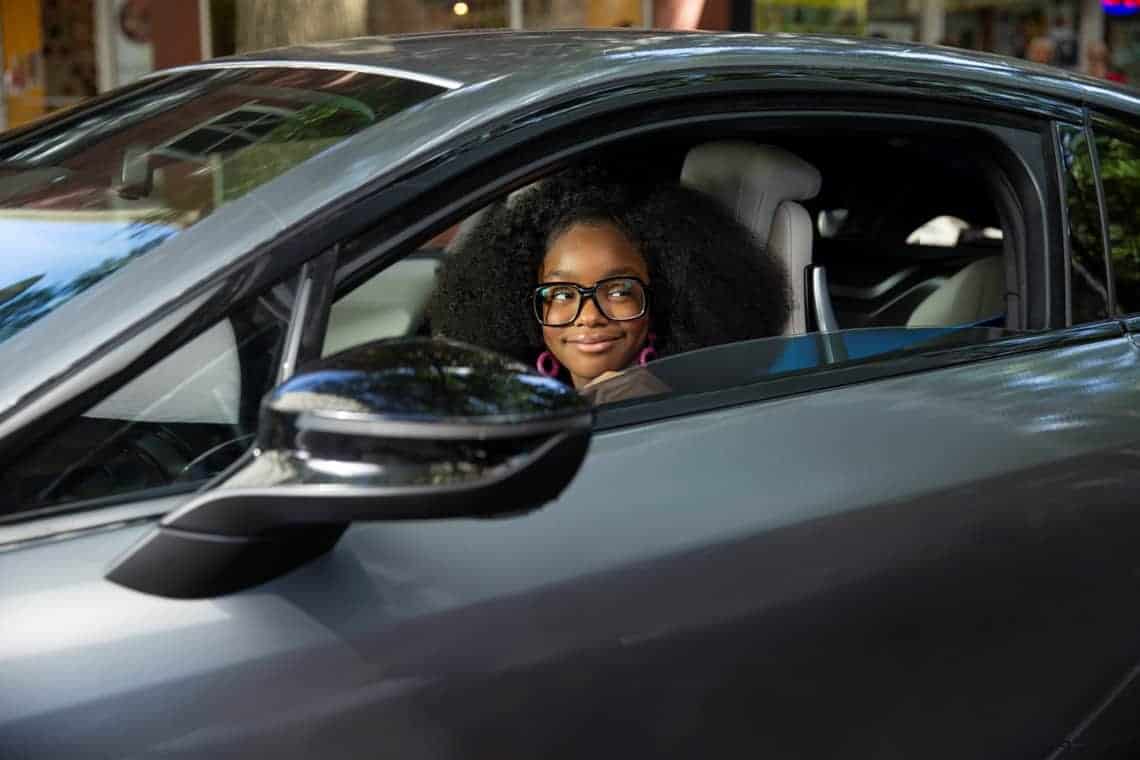 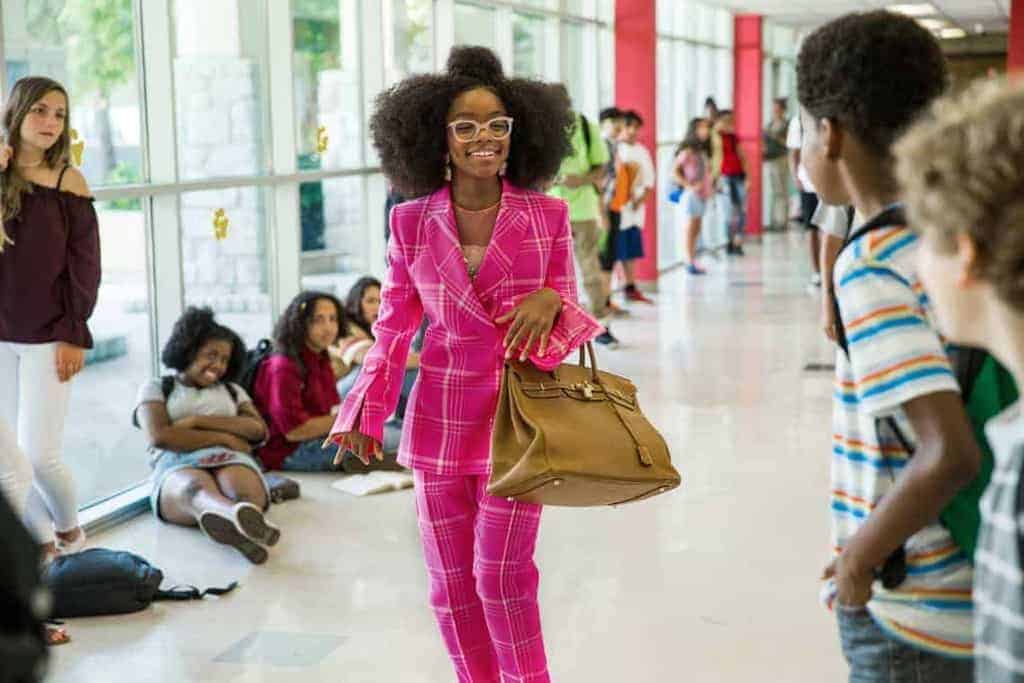 Low on options, because she has no friends, she does the only thing she can think to do. She calls the person who puts up with the most… April. She steps in and helps, of course, but not for free. Knowing the desperate situation her boss is in, she demands to be made ‘Creative Executive’ at the firm. This shows she has a spine and Jordan steps back, sneers and says something you wouldn’t expect to hear from such an adorable face. Mockingly, Jordan acknowledges the blackmail and suggests to April that her ‘balls have dropped.’ Part of why Jordan is in such dire straits is because Child Protective Services has gotten wind of the fact that she’s an unaccompanied minor running about. She must get enrolled in school; her old school, in fact. She gets just what the young magician had wished upon her when she ends up back in her own personal hell. Meanwhile, April has to run the office and get people to come up with ideas for their dissatisfied client.

Almost every scene has young Marsai Martin handling its demands with ease. She uses her eyes, facial expressions, her voice inflections and her body in ways that work to enhance the comedy in this film. After the madness, it comes to a smooth, natural and foreseeable conclusion but doesn’t feel too contrived or cheesy. Most reason is that Martin was that damn good. In the end, Jordan learns her lesson and when this happens, Martin turns down the comedic side she finds in herself to play Jordan and turns on the compassion switch. Everything about her completely changes.

I’m happy I saw this movie. Sure, the idea that this filthy rich woman’s entire, embarrassingly successful company’s future hangs in the balance because of one spoiled Gen-Xer is extremely weak BUT I ask you to overlook it and just enjoy the message, the comedy, and the bright new star and you won’t even notice the trivial things. I wasn’t sure I wanted to see it because I thought ‘Little’ was going to be ‘Big.’ Interestingly enough, it was BIG, but nothing like it. And that’s a good thing.