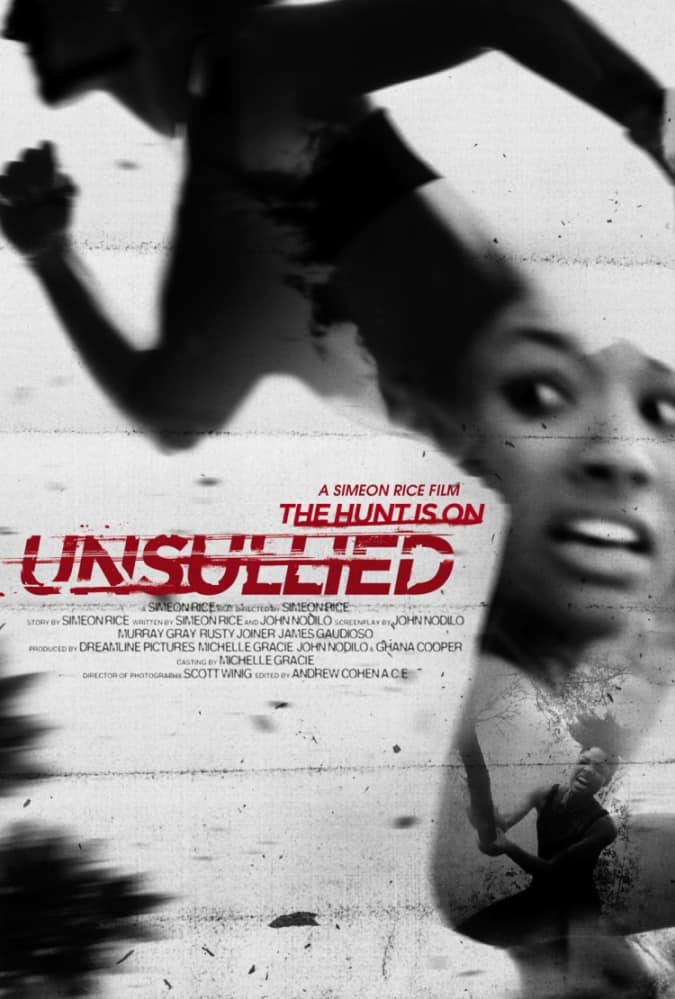 “Unsullied” is a film made by Simeon Rice, who directed and helped write the film after film school.  He graduated film school after he retired from pro-football in 2009.  He played for the Arizona Cardinals and also earned a Super Bowl ring in 2003 when he played for the Tampa Bay Buccaneers.

He was a very good football player but I’m not so sure that he’s going to be as successful behind the lens unless he learns more about what he’s doing.  We do need to keep in mind that this is his directorial debut, but he should take on smaller films and lighter topics first, “pay his dues” so to speak, because as it turns out, the film is sloppy and chaotic… muddled, and the problems with it were exactly what you’d expect from a new director who needs a bit more experience.

When learning that there were several writers on the project, you can see why so much commotion made it to the screen.  I won’t lie to you… if you like the type of action/horror movies that come from indie or student filmmakers, this is what “Unsullied” has in store for you and you’ll like the film.  It isn’t special and it isn’t new.  What doesn’t work?  It’s in conflict with itself and its overall message is unclear.  What works?  Well, Rice has surrounded himself with some good people, chiefly, his cinematographer, Scott Winig.  The movie looks good so, Rice has some experts in his corner and if he wants to continue making movies, his love of film and eye for talent behind the camera could begin to work for him.

As he declares in my interview with him, he’s very passionate about filmmaking and is humble enough to ask for assistance when he needs it.  It’s my belief that as he learns more about the game, as he did in football, there’s little doubt he’ll improve and even become good at this. That said, “Unsullied”, a story about Reagan (Gray), a track star who is kidnapped by a pair of sociopaths for a game of cat and mouse, is an extremely formulaic “B” movie, made more for Rice to get a feature under his belt than for an audience to love and then tout for their new favorite director.

I hope he absorbs the criticism about his film and what is said about him.  He should make improvements based on his mistakes and focus on creating a story that isn’t rife with commonality and concentrate more on entertaining his audience than proving something to himself and his friends.

SG: Everyone dreams of a second career and I know you’ve been asked this question a lot, but I must ask you… why film?

Rice:  I have a passion of storytelling.  I have a passion of… of creating concepts and being able to express yourself on a theatrical standpoint so… film, to me, is one of the ultimate levels of expression and freedom.  To be able to do that and tell your own stories in your own way from facts to fiction is just one of those things that resonated with me… and improved itself over time.

SG: You had made a short film, a comedy, and then you tackle an entire feature next.  Why such a tough project right away and what is the ultimate message you’d like to convey?

Rice:  That I’m a filmmaker.  That I’m telling a story and I can create details.  I want to go so far left of what people would expect from me and to show that I’m a serious filmmaker; as a storyteller and as of a responsible storyteller.  I have a film going into theatres nationwide and it comes from a very organic place.  Those tales I create are going to stay in the pulse of people.  I watched the film “No Country with Old Men” and as I sat and watched that film, I was so enthralled and into this movie, that I said, ‘I want to make a film similar to this’… one that’s going to lead you to the edge of your seat… that’s going to be an adrenalin rush of a film, that’s going to take you to epic heights and the lowest of lows, and things of that nature… so, I wrote “Unsullied” and “Unsullied” to me… it typifies the tipping point of what an action/thriller/suspense could be.

SG: You achieved all of that.  It’s crazy, this movie.  Murray Gray was the perfect choice for it.  She was tough mixed with innocence.  Were you involved in casting her?

Rice:  Yes.  I cast her.  She was brought to me by a casting agent slash one of our producers, Michelle Gracie and… yeah… I watched a lot of girls.  I sat in that process and ultimately picked the one who suited this role the best.  Her and her ability to translate emotion really spoke to me and she really went after this role and took on a full commitment and the responsibility of what a lead actress would do and I’m overjoyed with her performance.

SG: Now the cinematic side.  You had to have spent many days in the woods, not a Hollywood set, and shot day for night and such in those woods.  I have to commend you for picking the right director of photography, as well, Scott Winig, who started his career shooting music videos and won many awards there.  He got some really beautiful shots that had to have been equally as difficult to capture.  How many days did you spend in those woods?

Rice:  We were there just about twenty days.  The shoot was twenty-three days and we were in the woods about seventeen or eighteen of those days.

SG: Wow.  That’s a LOT of work!  What was the biggest challenge for you there?!

Rice:  I dealt with a lot of challenges but I think the biggest challenge was just… ummm… the anxiety of it.  Dealing with my own anxieties before shooting and having confidence in my own ability as a director.  But once I got on set, I think the biggest anxiety was the unknown; the fear of the unknown when you’re going into production.  But once I got on set, it all made sense… it all felt natural and I felt that I shouldn’t have been anywhere else but right there in the director’s chair creating this film.

SG: I must know your opinion here.  Which do you find harder, a three-week film shoot or a seventeen-week football season?

Rice:  I’m a “Game of Thrones” fan but it was more related to what she went through.  It begs the question, “Unsullied”, does she or does she not, you know?  It was just one of those things… the fact that the guys were so sullied… so tainted, you know?  She goes through this and we want to know, does she lose her way?

SG: Right.  Does she stay clean?

SG: Exactly.  So, what was your favorite part of directing?

SG: Is there anyone out there you’d like to work with in particular?

Rice:  I’m so humble.  I’m so fortunate if anyone would work with me.  There are so many great actors out there in the platform of theatre and production that if I’m connected with anybody out there that wants to tell a great story, I’d be overjoyed.

SG: What’s your advice for anyone who wants to go into filmmaking?

Rice:  Come in the game very prepared if you want to see your story through.  Tell your story.  Tell your tale.  Be dedicated.  Make sure, whatever you do in terms of storytelling, that you have an outlet for the big game.  Be honest in your creativity.  Be honest in your storytelling… but be a responsible storyteller and make sure that the message you’re trying to convey is parallel with the message you want to get out there.