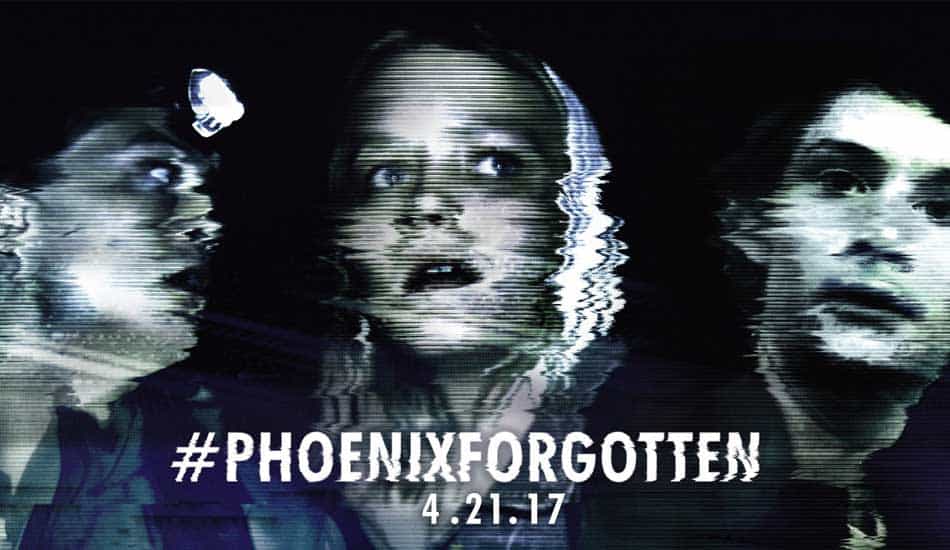 Phoenix Forgotten is Based on the shocking, true events of March 13th, 1997, when several mysterious lights appeared over Phoenix, Arizona. This unprecedented and inexplicable phenomenon became known as “The Phoenix Lights”, and remains the most famous and widely viewed UFO sighting in history.  Phoenix Forgotten tells the story of three teens who went into the desert shortly after the incident, hoping to document the strange events occurring in their town.  They disappeared that night and were never seen again.  Now, on the twentieth anniversary of their disappearance, unseen footage has finally been discovered, chronicling the final hours of their fateful expedition. For the first time ever, the truth will be revealed…

A week ago, I had the pleasure of chatting a bit with the director of this sci-fi/ thriller, Justin Barber.  He was charming, open and very excited that the release date of his feature was drawing near.  I told him what I thought about the very idea of the film and why I felt that way and he replied that since making the film he’s heard about so many experiences people have had, even his crew, and he tried his best to get the feeling people expressed to him into the movie.  To start us off, I couldn’t help but ask him about himself.

Shari: Have you ever witnessed anything?

Justin: I have actually.  It was when I was in a cabin in South Africa with my brother when I was in my twenties.  It was in a rural area and we’re staying in a lodge; it’s kind of rustic.  In the middle of the night, I was awake and reading and my brother was across the room asleep.  A bright light shone into the room.  There were already sheer curtains so I couldn’t see outside but I could definitely see the light source as it shone in and it cast shadows across the room.  It seemed to be from an elevated position, shining down.  And then it shifted.  The light source moved and the shadows swept across the room I just remember distinctly seeing the light move across my brother’s face as he slept.  I didn’t hear anything; I didn’t hear the sound of a truck or anything but after about 3 seconds it was gone.  It freaked me out so much that I rustled him awake.  I felt rather silly.  I don’t know what it was.  In retrospect, it could have been a truck or something with its bright lights and I couldn’t hear it but it definitely freaked me out at the time.

Shari: How would you describe the film?

Justin: This movie, at first, is a documentary with a big twist in the middle and it becomes a more straight up found footage ride.  You experience everything through the characters.  If they don’t see it, you don’t see it and in a lot of ways, it makes it scarier from a suspense standpoint.

Shari:  What else makes some of your found footage sequences different from the rest?

Justin:  We have some new things you haven’t seen but in the end what elevates the movie is the cast.  I think the cast is really stellar.  The actors did an amazing job with their characters.  They just wanted to make a good movie.  I do like horror movies and movies of this nature because of the suspense and because of the scares but often with this type of movie, the characters don’t seem very memorable.  I wanted to make a movie where the character was more fleshed out and where you care about them more… where they’re a little more distinct so that when they are in the more tense situations, the movie is more powerful.  I think that’s where we succeeded.  I think that characters are a little more original and I think the actors (thinks) the cast was just stellar.  That’s what sets it apart.  In terms of originality, I thought it would be great to make a found footage Close Encounters, the Spielberg movie, but I was also inspired by more contemporary documentaries.  I think we’re sort of in a Renaissance in science-fiction right now which is great to see a lot of original sci-fi in ways we haven’t seen in the past but we’re also in a Renaissance of documentaries.  There’s a lot of cool documentary projects kind of hitting the mainstream in a way they haven’t in the past.  You have Making of a Murderer, you have Jinx, on HBO, so we kind of drill in all of those things in the first half of the movie.  Make it a little bit different than something that’s a shaky cam for ninety minutes, you know?

Shari: A line in the film is that the government has been lying about UFO’s for fifty years.  Do you believe that?

Justin: Well, I put a lot of real people in the movie so there’s a documentary vibe and I had the character Josh ask people, ‘Do you think the government is lying about this?’ Without skipping a beat they were like, ‘Of course.  The government lies about everything.’  That was a very common sentiment from the people on the street who were willing to talk to us.  A lot of it was in Arizona.  We did spend some time in Phoenix trying to get to the bottom of this.  We did treat the subject matter as if we were making a real documentary.  But personally… I think the actual facts always come out later.  Regarding the Phoenix Lights, we are still waiting to see what it really was.  So, do I think there are things they’re not telling us?  Of course, I think that’s the case.  Do I think that they’re covering up actual aliens or actual UFO’s?  I don’t know about that but I do believe that there’s life out there… but I also kinda believe that, you know, often UFO on a radar is a distraction from something else they don’t want us to know.  Look over there, don’t look over here.

Shari: People are really going to appreciate your attempt at authenticity.

Justin: Close Encounters was a big inspiration for us but also the movie Catfish.  T.S. (Nowlin, writer) and Wes (Ball, producer) were in their office one night and were really taken with how it (Catfish) felt like this was real, and I’m actually suspect to this day (laughs) but it was that level of authenticity that I respect… and the original Blair Witch had that.  I was really impressed with how believable it was.  So when these kids go missing, law enforcement sets out to find them and we interview people who were involved in that search for these fictional kids but the people I interviewed are real police officers.  One of the guys is a private investigator in Phoenix.  A real private investigator who I made a case file for, which he studied; and then the character in the film who plays a filmmaker, I just did a real interview between them and she asked him these questions pertaining to the case and he went with it.  It was amazing.  We did a lot of things like that to catch the authenticity.

Shari: What was the biggest challenge and why?

Justin: Blair Witch was still one of the scariest movies I’ve seen.  That being said, it’s a genre UFO movie and I wanted to do as much practically as possible.  I love the ending of Blair Witch a lot.  I think it’s really full but there were some people that were probably a little put off by it, I think.  So, we just wanted to ride that line a little bit and we wanted to not show everything but it’s a genre UFO movie, you want to have a little bit of a payoff so, we do show… we do have a big finish but I wanted to do as much on camera as possible.  We found this great guy named Joe Pancake.  Joe Pancake is a special effects guy and I got connected to him through one of our guys at ScottFree and he works on huge movies.  I mean, he does big stuff.  He’s the guy you go to when you need a Transformer footprint.  He was willing to help us out with our movie, which is very small.  He went above and beyond what our budget was and helped us with some really cool, practical gags.  The thing about making a found footage movie in this day and age is that the cameras are totally disposable.  I got to destroy a lot of cameras to get some of these gag shots; my apartment is sort of a graveyard of broken cameras, but there are digital sections.   Some things you can’t do in real life, but I always try to at least ground it in a place with the actor where there’s real stuff going on and then add it later into the computer.  In a way, the challenge was that… it was meant to be a documentary and getting the actors to wrap their head around that… it took a lot of work to get them there; getting the authenticity of the modern day documentary moments I think was the most challenging in a way to make it believable but I think we did get there.  As far as with the found footage stuff… in a way that was easier because we did try to make it real for the actors with the practical effects so when they’re playing that fear, they’re able to react to things that are actually happening.

Shari: What drew Ridley Scott to the project?

Justin: T.S. Nowlin has worked on other stuff for ScottFree and just happened to be in a position where he could pitch this movie to Ridley and he really liked it.  What I learned in the course of making this movie is that Ridley is really invested in helping young filmmakers.  Conceptually, it was something he really liked.  I think he liked the idea of a found footage Close Encounters.  While I was making this movie, he was making his Alien movie but he was always available to offer his input.  Everybody across the board, from Ridley and the producers at Cinelou, all the way down to the cast and crew… this is the kind of movie that now when I look back I can see everybody in it.  It was a great team effort.  Everybody really contributed in one way or another and that’s something I’m really proud of; how everybody handled it.  From the top down.

When I first start talking to the extremely friendly Barber and considering the subject matter, I couldn’t help but mention something from his film that had happened to me in Northern AZ; because it was very similar to what he has his characters experiencing in the film.  I had always thought what I saw was odd and at the time I was frightened but that’s about as far as I go.  I thought it was fun to tell him and now you know so if anything odd has ever happened to you, maybe you’re not crazy?  Maybe we really are being watched.  Never know, right?  Regardless, watching sci-fi thrillers paint a story is a nice, safe way to enjoy the idea.  Phoenix Forgotten comes out today.  Enjoy!