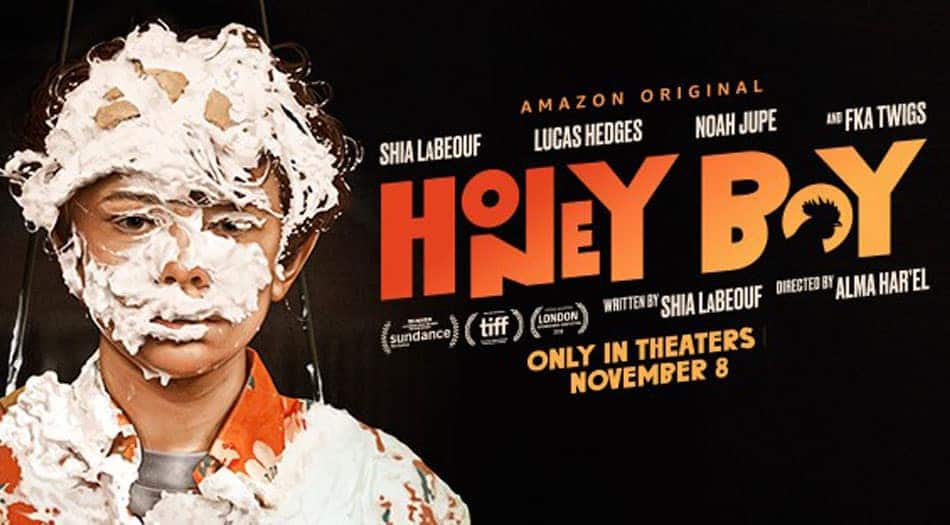 ‘Honey Boy’ is a moving film written by Shia LaBeouf. It’s semiautobiographical about the time that he spent in rehab after being diagnosed with PTSD. The movie outlines the ultimate reason why his life went the direction it did. LaBeouf is brave as he bares all, digging deeply into his childhood and laying it all out for us to see.

We’re witness to his father taking out on the child the fact that his dreams were dashed due to his own deficiencies. He was a rodeo clown who hoped he could have the success his son has achieved and now seems to resent that son for having. LaBeouf reveals how turbulent his childhood was, by giving us an intense and impressive performance as his drunken, boisterous father, named James. The young Shia, called Otis here, is played by two actors. The older Otis is the talented Lucas Hedges (Lady Bird, Ben is Back, Boy Erased), and the younger is the gifted, Noah Jupe, (Wonder, A Quiet Place, Ford v Ferrari) who is simply unforgettable in the role.

We’re immediately taken with the young boy who trusts that his father loves him and is looking out for his best interests. Sadly, we know better and have an overwhelming desire to reach into the screen and snatch the child from the overbearing father who’s using his son for the paycheck. Living with a father who drinks is terrible enough, but throw in the shame James feels for having to work for his son, and it can get ugly for poor Otis. James enjoys putting Otis down to ensure the youngster knows his place. Not only that, but he only wants to encourage him so much. James wants Otis to work, but he doesn’t want Otis to think he’s better than his father. That’s what’s most heartbreaking about the movie. There’s no doubt he loves his son; he just doesn’t know what’s best for him. He can barely take care of himself. Raising Otis in a hotel full of prostitutes might not win him the father of the year, but when he’s not watching out for Otis, at least they’re there to see he doesn’t get into too much trouble.

Through his unusual upbringing, Otis has picked up some bad habits. Watching him learn about the world beyond a soundstage makes the film unique and special. First-time director, Alma Har’ el, did an outstanding job of bringing you a compelling and gutsy film. She made surprising and noteworthy decisions, using flashbacks that keep the audience delighted for the young star. Then she shows his future on occasion, so we see how particular moments end up affecting his adult life. This keeps you on a rollercoaster of emotions but in the right way.

I’m looking forward to what she does next. You will, too.

I’m guessing we’ll see her when the trophies for filmmaking are passed around, and she’s not the only one from ‘Honey Boy’ who will be recognized. LaBeouf and Jupe could be in the running for Best Actor and Best Supporting Actor, with LaBeouf possibly picking one up for Best Original Screenplay. Jupe’s performance is sensitive and unguarded yet peculiarly mature. As far as Shia LaBeouf goes, you can’t help but be curious as to how he could watch his father come alive in the dailies at the end of a long day of working and continue without breaking down. It says a lot about him. That’s award-worthy in and of itself. I believe he’ll be picking up something for his efforts. Regardless, he wins the respect of everyone who watches this movie and sees the emotional and physical abuse he endured as a boy, at the hands of the jealous man who raised him.

I’ll end by saying that if you don’t want to see this because the trailer wasn’t enticing, don’t judge it by that. The trailer doesn’t have the time to tell you what this story contains. ‘Honey Boy’ is a painful reminder of how fragile children are in the hands of a predator. Congratulations, Shia, for telling your story.