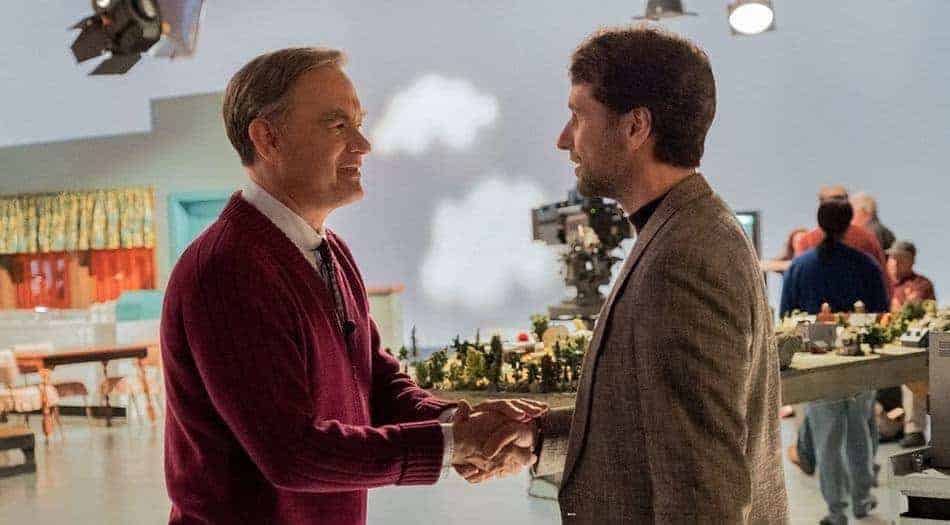 A Beautiful Day in the Neighborhood’ is the film of the year that you may not consider to be the best of 2019 but the one that you recall as having been one of the most appealing in several different categories. ​
I’m conflicted on exactly how to categorize the film, myself. Tom Hanks’s portrayal of Mister Rogers left a profound impression on me. Does he deserve Best Actor for his performance over who my first choice had been, which was Joaquin Phoenix, as Arthur Fleck? Well, maybe, but I didn’t ruminate on his performance of the Joker quite as long as I have on Hanks’s depiction of Fred Rogers, to be honest. What you get from Hanks is another stable transformation into a famous television personality that many remember from their childhood. I’m sure his knowing that meant the pressure was on not to mess it up. Then again, portraying a real-life personality is nothing new to this talented man. In fact, this is the sixth movie where he’s representing someone, and as usual, he hits the nail on the head. What’s particularly remarkable about his efforts here is that ‘A Beautiful Day in the Neighborhood’ isn’t even a biopic.

The film is based on an Esquire magazine article written by Tom Junod. The report, ‘Can You Say. . . Hero?’ was written in 1998 after Junod had spent time interviewing and getting to know Fred. In the film, the writer the article is assigned to is named Lloyd Vogel, played extraordinarily well by, Matthew Rhys (The Post, Burnt). Lloyd is introduced to us in a manner Mr. Rogers would wholeheartedly endorse. The film starts like an episode of the show would. In one way that director Marielle Heller (Can You Ever Forgive Me, The Diary of a Teenage Girl) achieves this goal is to have her audience watch the episode in the 4:3 aspect ratio, which gives the feeling of watching television. You’ll enjoy the authenticity it offers.

Then Mister Rogers gets out a board that has a picture of Lloyd’s face in a little window. He goes on to explain that Lloyd needs forgiveness. Mister Rogers tells his audience that everyone, even Fred himself, at one time or another, has gotten upset. Fred did when he was teased and called names because he was fat when he was growing up. He says that he’d often cry and not be able to control feeling anger swell up inside. He advises that there’s ‘Always something you can do with the mad you feel.’

Lloyd isn’t interested in advice from ‘Mister Rogers’ and, as he usually does with his subjects, will do his best to expose his weaknesses. He, after all, doesn’t write fluff pieces. Lloyd plans to pick him apart even after his wife, Andrea (Watson), begs him to be nice to one of her childhood idols. Those plans go awry after he meets the man, however, because Lloyd isn’t prepared for Fred’s brand of kindness. Fred turns their first meeting around on Lloyd, and instead, he does the interviewing, uncovering Lloyd’s vulnerabilities. What begins to happen is, Fred pulls from the writer, feelings he had long buried deep within about his father, Jerry (Cooper). Lloyd kept finding himself on the defense.

This is brilliant scriptwriting. It gives the world a look at who Fred was, how he did what he did, and why. The movie shows us that he never really wanted anything. He was just a good person who believed that through children, adults had a new opportunity to grow. He wanted adults to let go of preconceived notions of how they’re supposed to act and simply be loving and kind to one another.

He also wanted people to appreciate diversity and have the ability to recognize that no life is perfect. Lloyd takes several attempts at eliciting a negative response from Fred but fails miserably. It’s around this time when he begins to see, not only his own shortcomings but Fred’s worth and just how important of an influence Mister Rogers indeed was. Then, what was to be a four-hundred-word assignment becomes a ten-thousand-word exposé that lands the cover.

As Lloyd Vogel hadn’t, I never really paid much attention to Mister Rogers. I didn’t think much of him until I saw the Netflix documentary that came out in 2018 called, ‘Won’t You Be My Neighbor?’ See that and see this film. The two together give you an excellent glance at a spectacular human being. He deserves this film, and you deserve the entertainment you get from viewing it. For extra fun, see if you can spot Fred Roger’s adorable widow. She’s in a scene and said Fred would have been proud to know that Tom Hanks was playing him. Good to know.

A Beautiful Day in the Neighborhood