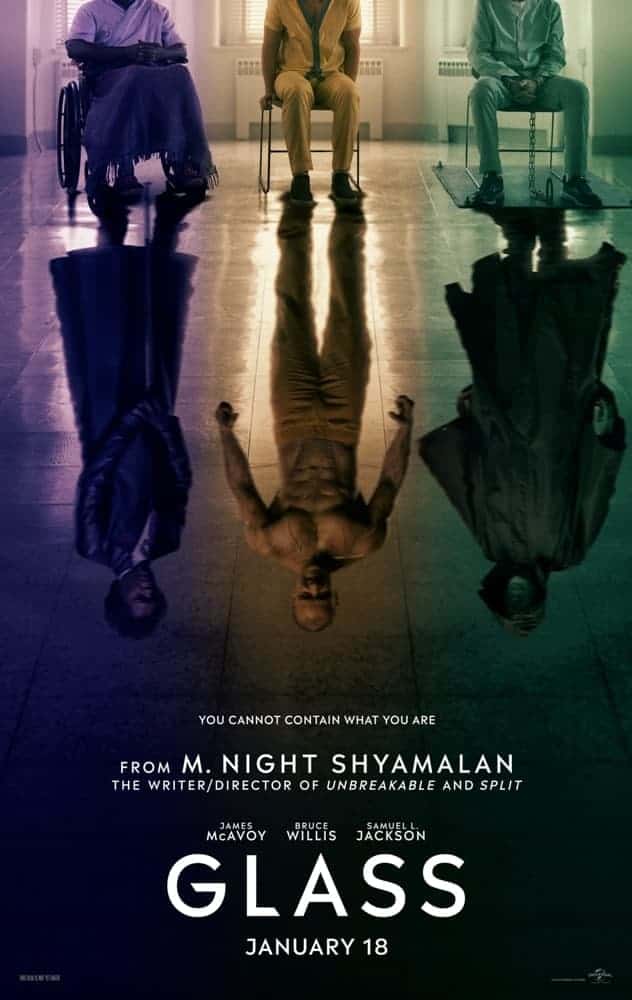 M. Night Shyamalan brings his two hit films ‘Unbreakable’ and ‘Split’ together after nineteen years to celebrate an almost perfect sci-fi, thriller marriage in ‘Glass.’
Within the story of ‘Glass,’ the main characters from the two previous pictures are unwillingly united for reasons they’re unaware of, however, once they see each other again, it’s agreed upon that fate has brought them together again to continue where they left off.
Samuel L. Jackson is, once again, Elijah Price or ‘Mr. Glass’ as he prefers to be called. He’s a comic book enthusiast who’s convinced that Superheroes truly exist and proves so by using his incredibly gifted brain to be a Supervillain. At the moment he’s in a mental hospital being helped by his doting mother. Mrs. Glass is played by, Charlayne Woodard, who returns after ‘Unbreakable.’ Bruce Willis returns as David Dunn, the security guard now business owner, who helps catch criminals by touching people and receiving telepathically a crime that has been committed. The business David owns is in something he knows well and that is security. His son, Joseph, who’s played by Spencer Treat Clark who played the part originally all those years ago, helps him capture a criminal post vision.

Then there’s James McAvoy. Let’s talk about James McAvoy. He joins them as Kevin Wendell Crumb and, of course, ‘The Horde’ which means we’ll also see Patricia, Dennis, The Beast, Barry, Heinrich, Jade, Ian, Mary Reynolds, Norma, Jalin, Kat, B.T., Mr. Pritchard, Hedwig etc., the personalities who live within Kevin’s brain and take over his body when they have the light that Kevin so desperately avoids. To them, holding the light is being the personality able to control the body completely and make their presence known to the outside world. Whichever one has or keeps the light has all the power. The Beast wants this power but can be controlled… for now. Casey Cooke, played by Anya Taylor-Joy, was the only person to survive The Beast and decides maybe she can help control him again. Look for her to step in at some point and give it a try.

Sarah Paulson makes her entrance as Dr. Ellie Staple. She’s convinced that these humans are delusional. She captures them and tells them they have three days to accept that reality, using their weaknesses to control the narrative. She keeps Glass heavily sedated, uses hypnotic strobe lights to control ‘The Horde’ and keeps David in a room that will fill with water and drown him if he tries anything stupid. These safeguards make it impossible for them to escape. Or do they? Kevin’s personalities, one by one, try to break the barrier. Here’s my small soapbox moment. I must say that it was wrong to see James McAvoy’s performance ignored after ‘Split.’ This time, with the way he goes in and out of characters continually, it would be a travesty if he were to be overlooked. To this film, he was an absolute godsend. Little by little, more is divulged and you grow more curious as to what the big reveal will be. You know it’s coming.

I believe that ‘Glass’ was the perfect way to advance the story. Without revealing too much, I want to make it known that I think you should avoid listening to any negative press the film might be getting and say to you, ‘Just go and see for yourself.’ Sure there will be things to question, some quite obvious, but they’re harmless issues and don’t take anything from your belief in what’s going on before you. The fascinating twists that Shyamalan once again delivers to you in this plot keeps you riveted and will leave you fulfilled. The cinematography, score, and intensity of the script are reason enough to see this but the acting by McAvoy is extraordinary. That said if you can’t enjoy a sci-fi without using it as an opportunity to search for and find every mistake that renders it incapable of being real, maybe this isn’t for you. However, if you want to see an excellent sci-fi film that thrills the hell out of you and captures what you so loved about M. Night Shyamalan in the first place, you will not be disappointed.