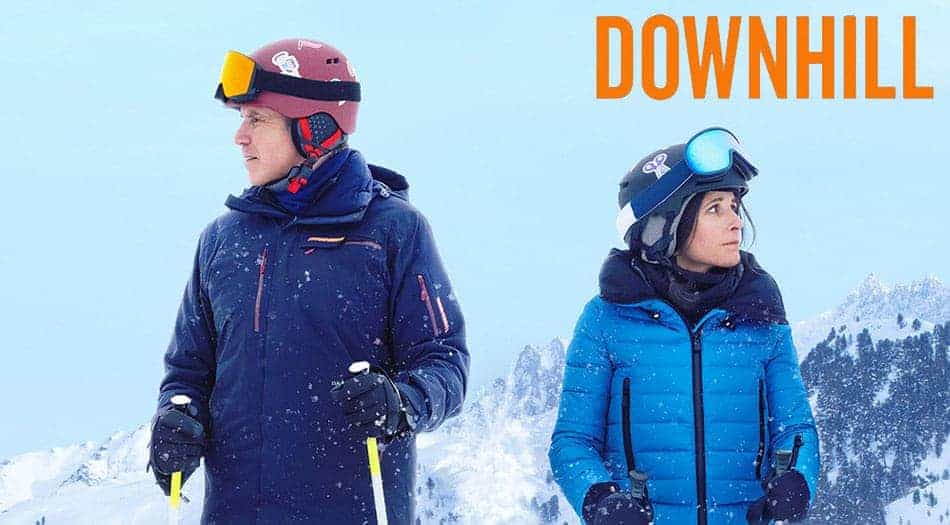 ‘Downhill’ is a remake of a movie called ‘Force Majeure.’ It’s also not the movie you’d think it would be. Even if you’re fully aware of what the word downhill is alluding to, the trailers don’t really point out the direction it ends up taking.
It’s out today, on Valentine’s Day, so you think it’d offer ‘some’ romantic scenes. After all, it’s from the ingenious, Jim Rash and Nat Faxon (who made the incredible ‘The Way, Way Back’ together), and stars Julia Louis-Dreyfus and Will Ferrell. That’s comedy gold waiting for you there, right? You couldn’t be more wrong concerning what this movie brings about.

There are comedic elements to the film that you can be sure of. The names I’ve mentioned practically guarantees that as comedy oozes from their very existence. To put it in perspective for you, the amusement here stems from tragedy as well as comedy. Being in a certain amount of pain can make you chuckle, am I wrong? As we try and cover up an awkward moment, we laugh to turn it into something diverging from the context of the situation we find ourselves. Often times this happens to stave off the embarrassment of a fall or the like. A joke repeatedly breaks tense moments. This movie is filled with pain and suffering. It’s examining how fast a marriage can be extinguished based on one incident. There are moments within where the tension is so thick that it almost gets too uncomfortable to watch… if you’re there to laugh, that is. But you can’t turn away. Oh, no. I promise you must observe how it’s going to play out.

Early into the film, we see a couple, Billie (Louis-Dreyfus) and Pete (Ferrell), with their two teenage sons, enter a resort in Austria to help Pete grieve the loss of his father. It appears that they were booked into a resort that’s for adults only. What unfolds on this line of the story is that at no time do their young sons have much fun. Apparently, the family-friendly resort is down the road, but Pete isn’t willing to switch. Seeing that there are beautiful women around, he’s okay with having the boys stay in the room to watch movies or play games if they’re not happy. The only other choice is to ski with their parents. That’s the end of the discussion. This isn’t the typical family vacation yarn. Only Pete wants to be there. We find out that he’s also competing with his friend Zach (Woods). Zach’s country-hopping and having the time of his life. No kids. No agenda is his motto! That’s the freedom, Pete craves.

The family goes to the outdoor restaurant the resort has and is looking at the menu when suddenly they hear a loud noise. Soon after, snow loosens from the top of a nearby mountain and tumbles down. They’re mortified as they see it build in speed and size, getting closer to them. People start to panic, even though shouts of, ‘Controlled avalanche!’ can be heard in the distance. By all appearances, nothing about the situation is controlled. When it’s clear they’re going to avalanche won’t miss them, Pete grabs his phone, turns and runs, leaving his wife and children to fend for themselves. She later recounts the story in an incredibly dramatic scene that Pete had left them to be buried. She’s holding it in around the kids, but it’s getting difficult to pretend that everything is alright.

Seeing the couple go from comfortable boredom to avoiding the subject as well as one another is somewhat heartbreaking. However, when Pete gets shunned by his wife and kids, you never once feel sorry for him. Only the situation they’re all in. There isn’t a reason to root for Pete. His friend Zach tries to defend him, suggesting that perhaps it was a survival mechanism kicking in that caused him to run away. This sentiment goes over like a lead balloon with both Zach’s girlfriend, Rosie (Chao), and Billie. Best Zach keep his mouth shut.

As I’ve mentioned, the film is challenging to watch, which is what is so good about it. Julia Louis-Dreyfus is fabulous in the movie. Hers is a powerful performance. She attacks Pete with fierce abandon. So much so that you can see the marriage may be over. He finally does admit that he has broken their bond by being a coward and that he hates how she and his boys now see him. And he deserves that. But in the end, there’s a loving gesture that suggests maybe he can manage to bring her around… someday. But not today. Today he has to work on himself.