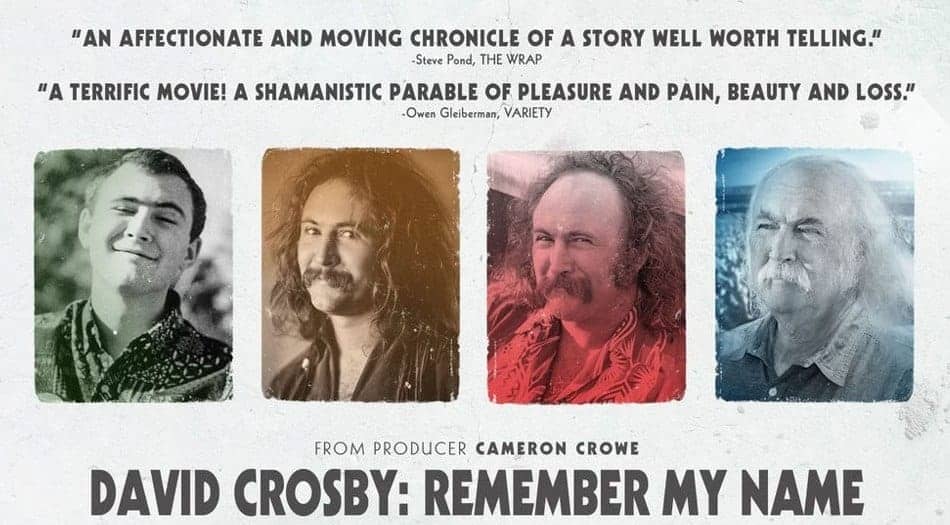 “David Crosby: Remember My Name” is a reference to the Crosby of “Crosby, Stills and Nash” fame, and later  refers to “Crosby, Stills, Nash and Young”. No, that’s not a high-powered law firm. It is a seminal acoustic/rock and roll band back from the early 1970’s. Kids, you might need to ask your parents or grandparents about this. They were all part of the L.A. music scene, and hung out in Laurel Canyon area. The all met up with many other famous music artists of that era. Again, many of you kids might not know of Buffalo Springfield, The Mamas and the Papas, Joni Mitchell, The Doors, and similar bands. Rest assured, David Crosby was there and this documentary proves that he lived through this tumultuous time of ‘sex and drugs and rock and roll’.

Back at the beginning, David Crosby was part of a band called The Byrds, releasing songs like “Eight Miles High” and “Mr. Tamborine Man”. However, the leader of The Byrds got tired of Crosby and his political views and early drug habits. Crosby met up with Steven Stills and Graham Nash, both from other bands that had broken up. They met up at the home of Joni Mitchell who was a popular singer songwriter of that time. They created sweet three-part harmonies in the kitchen, and they soon where bound for a studio. They created a great album (self-titled as “Crosby, Stills and Nash”) and they started to skyrocket. Soon after that, the band met up with Neil Young, and he become another member of the band. Things were really cooking, and David Crosby was living the high life. Literally – it was the ‘high’ life.

Crosby was overdoing the intake of drugs, even up to cocaine and heroin. He was allowing his inner demons take over inside and that made him nasty and mean. People whom he adored and worked with for years got pushed away over time. Even when Crosby got on his boat and went sailing, he could not find the peace. He had so much raw talent and musical ability, yet his own additive personality pushed him over the edge multiple times. All of his musical connections would no longer deal with him. All of his close band-mates grew to despise him. He became a millstone around everyone’s neck.

At one point, he got caught up on the wrong side of the law. He fled justice for a while. He just was hiding out on his boat in Florida. But it was not kept up for many years, and it was starting to fall apart. It represented Crosby’s life. He turned himself in and served a sentence in jail. But the jail time got him sober. He was greeted by his wife Jan, when he got out. He decided to leave the counterculture behind. No more drugs and bad behavior, he would clean up his act. It still did not remove his medical issues and his corrupted reputation in the music business.

Every time that “Crosby, Stills and Nash” attempted to get together, all of the old passions popped back up and ruined everything. So David Crosby has not been a part of any of his old groups since that point. He writes new music and tours with his own band. But the Rock-and-Roll Hall of Fame superstar has become faded and dimmed in the spotlight.

The Phoenix area, playing exclusively at the Scottsdale Harkins Camelview.