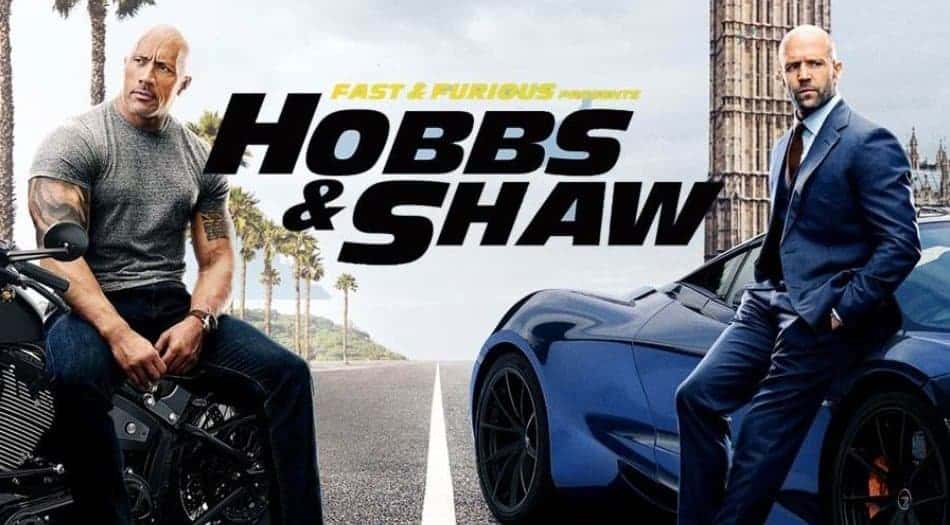 “Fast & Furious Presents: Hobbs & Shaw” is quite a mouthful. And like the physique of Dwayne Johnson – it is larger than life. This is a spin-off from the “Fast and Furious” movie series. It is not a spin-off from “Calvin & Hobbs”, but there are lots of humorous moments. But mostly there is Action, preceded with a capital A. In a “Fast & Furious” movie, all the cars were equipped with Nos (Nitrous Oxide) afterburners that kicked the cars into high gear. For “Hobbs & Shaw”, the movie is also equipped with an afterburner. This one is powered by the dual fountains of Testosterone, provided by Dwayne Johnson and Jason Statham. It juices up the action into overdrive with chases and fights, and just plain ass-whooping.

Luke Hobbs (Dwayne Johnson) is an American government agent, who once was on the trail of the “Fast and Furious” but has since become an ally. Deckard Shaw (Jason Statham) is a past British agent who has gone rogue and was a major adversary of the “Fast and Furious” crew. He is turned around to help them recently, because he and Hobbs do not get along. Shaw has a sister in MI6 named Hattie (Vanessa Kirby). She and her crew are attacked by an underground group of fanatic soldiers run by Etheon. This shadowy group has developed a massive virus MacGuffin thingy, and the government needs to take it away from the crazy Etheon scientists. The rogue group is led by Brixton Lore (Idris Elba). He, like Deckard, is an ex-MI6 agent, who has been genetically enhanced and is part cyborg. Hattie has no option but to inject herself with the super-deadly virus.

After Luke meets up with a CIA agent (played by… someone who was once found Dead in a Pool), he leaves to join forces with Deckard. They revive their hate for each other, by trading pithy remarks and cutting barbs. Deckard wants to work alone to find his sister, and Luke has no intention of letting Deckard get in his way. Hattie is found and recovered, and then soon taken away again by Brixton and his henchmen. Deckard and Brixton tell of that time when Deckard shot Brixton in the head for going to the dark side. Good times, good times. Etheon got Brixton back to life, with bigger and badder plans for him.

Hobbs & Shaw find out that Brixton is holding Hattie as a hostage in the Ukraine. They find a way to infiltrate, and let’s just say a lot of things blow up. They are able to get Hattie freed, and Brixton is even more pissed. They all need a good place to hide, but they are short of friends that they trust. So, they contact a new (annoying) Sky Marshall that they met (played by… an actor with a lot of Hart). They arrange to go back to Luke Hobb’s home – back in Samoa. His bother Jonah (Cliff Curtis) is not pleased at first, because Luke bailed out on living on the island. But he rallies the islanders to fight back against the evil Etheon that will come to get Hattie and destroy anything that gets in their way. But the Hobbs group has no high-powered weapons, just a load of island grit and heart. Guess which one will win out in the end?

Is “Fast and Furious Presents: Hobbs & Shaw” presumptuous, over-the-top and full of plot holes? Yes, of course it is. Will care a whit when you watch it? No, it will subtlety set your brain to the neutral gear and overwhelm you with action, excitement, and bickering banter. When you are done, the little minor flaws will not matter. Because you have been blasted with the enjoyable presence of Dwayne Johnson and Jason Statham, giving not so much an acting performance – but a Testosterone-fueled charm assault. Director David Leitch has cut his teeth on Action movies, such as “John Wick”, “Atomic Blonde”, and “Deadpool 2”. He knows how to stage a frantic car chase in the streets of London, or an Etheon ground invasion of Samoa with the good guys fighting back ‘old school’. Johnson and Statham just show up and back talk each other, and it’s great. The two of them are top stars for to-the-wall Action, so they are in their element.

There does not need to be a tightly-wound complex plot, not when you can get these guys from Point A to Point B and start the Chase/Fight/Bicker-Fest. The acting is not at the level of a Shakespeare play, but it matches the intensity and crazed nature of the script. The high-powered delivery system of Action allows for a few really funny moments. Plus, some great cameo appearances (by actors who shall not be named – see above). There is a loose likability of the group assembled to rock this fictitious world. It should translate into some fun box office numbers.

MPAA Rating: PG-13 for prolonged sequences of action and violence, suggestive material and some strong language