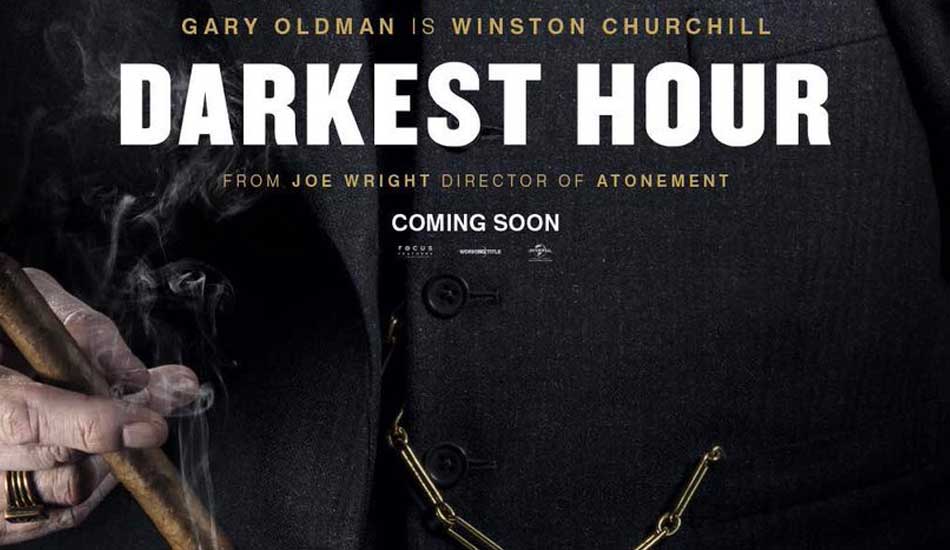 The nominations for ‘Darkest Hour’ alone will make you want to bolt to the theatre and see it but spectacular are the performances of Gary Oldman and Kristin Scott Thomas.  Now that I got that out of the way, let me introduce the film by saying that there is a particular audience for it.  If you love history and if you love war pictures, well, the behind the scenes drama of war, this could very well be one of your favorites for the year.  It’s the best of its kind to come along in a long time.  Gary Oldman gives an exceptional Oscar-worthy performance and for that alone, it’s well worth your time.

It’s long at two hours and five minutes but only a few times do you feel its length.  The film centers around a very short period of time in 1940 during World War II.  With Nazi soldiers breathing down their necks, Parliament makes a decision.  The Prime Minister of England is hoisted from his position for being too weak with Hitler, but they struggle with knowing that quite a crisis will befall his replacement. They now toil with who that replacement will be.  Who can handle the evil that Hitler has shown himself to be?  They need someone strong and, as you already know, decide to give Winston Churchill a try though many have their doubts. 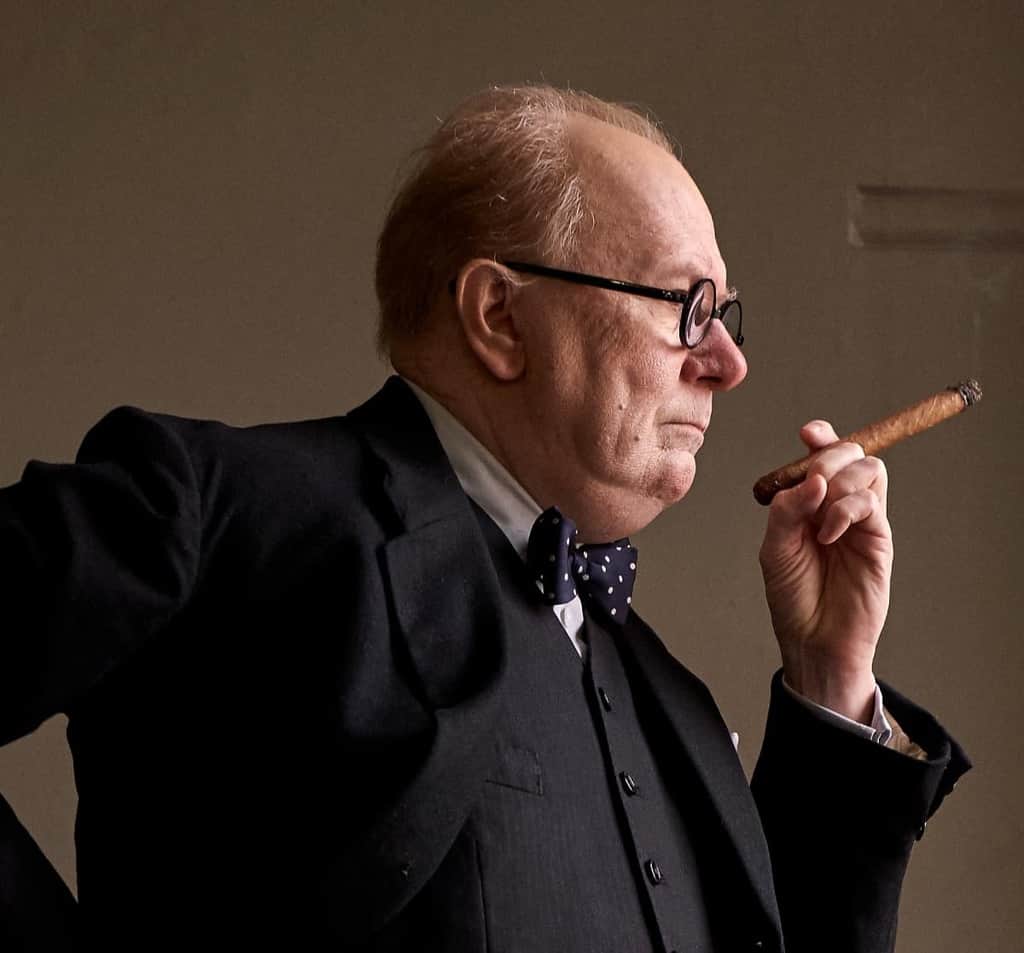 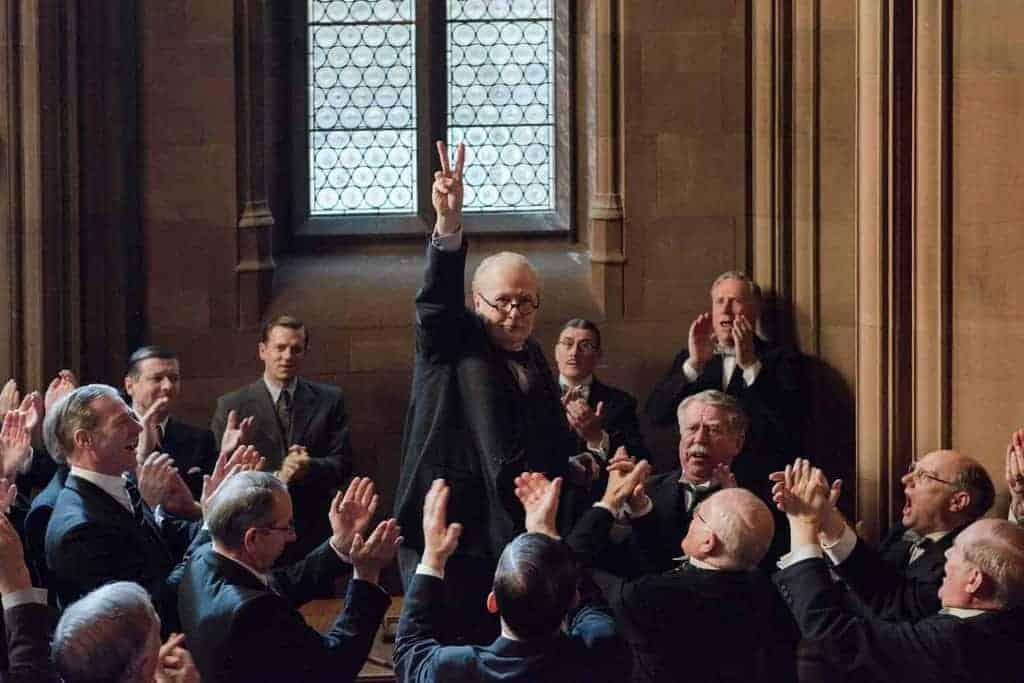 We go heavily into the life of Churchill during these days.  We even see him in bed, as he demands his breakfast, to get to know him more.  It’s easy to see that he’s gruff with everyone he’s around, his wife and his secretary, but for some, it’ll take a while to see another thing… Churchill is played by… Gary Oldman!  It really is Oldman peeking out from behind a pound of makeup and camouflaged beneath tons of padding to make him more believable.  He’s outstanding and watching this on the big screen will allow you to absorb the performance that much more which is something I truly hope you do.  He deserves that much, and you’ll be the richer for having witnessed it the way director Joe Wright (Atonement, Hanna, Pride & Prejudice) meant for you to see his portrayal.  If you’re not aware of the importance of who this man was in the grand scheme of things and in the larger picture of ‘what could have been,’ this movie can serve not only as a captivating piece of history or reminder for you but a cautionary tale of how close we once came to no longer being who we are today and how close things still can escalate to put us in that same position.

Churchill kept his wits about him and saw that England was done for sure if Hitler wasn’t stopped.  He had a broad strategic approach and unlike the previous Prime Minister, he knew the situation couldn’t be met with talks of peace.  He realized Hitler knew nothing of peace.  He approached the United States for help but was sadly turned away and as Hitler got closer, he had another political battle.  He had to convince his own party that fighting was the only thing they could do if they were to survive the assault on their country.  He went to the people of England and put it to them, in a scene you won’t soon forget, and got his answer.  Fight.  As the enemy swarms the shores of Dunkirk, Churchill calls on all of England to help and is on his way to victory.

Darkest Hour is remarkable and I recommend you get your ticket early and get to the theatre to see this TONIGHT!  You’ll be moved, you’ll be that impressed and I think you’ll agree… Oldman is on fire in this film.  His supporting cast is equally as good.  You’ll be thoroughly entertained.  By the way, after seeing this movie, one might feel compelled to watch Dunkirk.  It’s only logical that you do.  Though they feel quite different because they’re made by different directors they are perfect for back to back viewing.