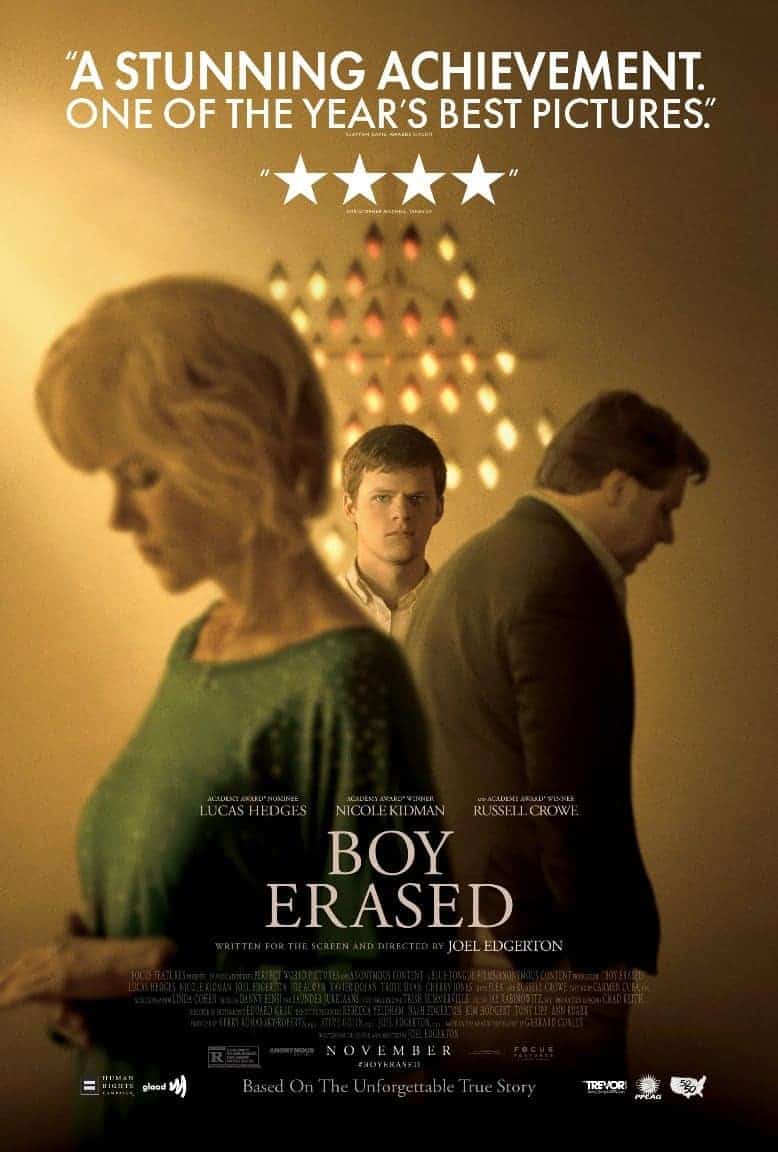 ‘Boy Erased’ is director Joel Edgerton’s take on the controversial subject of gay conversion therapy. Edgerton’s adaptation of the Garrard Conley memoir is very powerful. Its subject matter is handled very delicately from the fear it ultimately comes from to the people that fear harms. The film draws from facts, real pain, real experiences, and Edgerton displays it openly for us, showing us one character after another’s experience in this hideous program but then laser focusing in on one character, Jared Eamons (Hedges), to take you deeper into their ordeals. There’s a postscript statistic displayed at the end of the film that, ‘over 700,000 Americans have been subjected to conversion therapy and over 20,000 Americans are currently affected by this abusive practice.’ After watching the film, it’s hard not to walk away stunned especially after being hit with those numbers. It’s appalling to think that in this day and age abuse and humiliating to control and manipulate is still being used.

Jared is the son of Marshall (Crowe), a southern preacher, and his wife Nancy (Kidman). Because of who his father is, Jared must hide who he is. He’s successfully hidden it from the world and even lies to himself. He does this until he’s faced with a female friend who comes on strong. He thinks fast and turns her down with the excuse of waiting until marriage. He navigates his youth and gets to college where he feels safer to relax and at least talk to other boys without scrutiny. He begins to make friends and becomes especially close to a boy his age named Henry (Alwyn) who he has a lot in common with. Henry ends up taking advantage of the naïve preacher’s kid one night and rapes him. This scene is quite horrific, but Edgerton doesn’t shy away from its brutality. He uses it to show that sexual assault and this type of abuse exists in nature and might also be suggesting the reason why some people are the way they are. Violation based on anger doesn’t discriminate based on sex. Jared avoids Henry and eventually goes back home. Henry isn’t happy about his friend leaving him and worries Jared is going to tell o he ‘Outs’ Jared to his parents.

This leads to his father consulting some church elders who decide that his mind could be altered using conversion therapy which is supported by the ministry. He can be cured of his homosexuality if he takes the steps to prove he wants to be cured. The program is similar to AA but heavily Bible-based. It’s led by Victor Sykes (Edgerton) who comes at them from an aggressive, militant angle. He’s going to make them men if he has to pound it into them himself. Jared is instantly miserable but sees that he’s not alone in the world. There are others denying who they really are to make someone else embrace and accept them. Some are worse off than Jared who has it relatively easy because his parents, as misguided as they are, do still love him. He meets Jon (Dolan) who doesn’t touch anyone because touching to him has mostly been physical abuse and Cameron (Sear) who has an extremely hard time with being forced to tell Sykes what he wants to hear. The boys, in their sterile environment, are treated as prisoners but find subtle ways to show support for one another, however, their support just might not be enough.

The gullibility and innocence coming from Hedges is fantastic which is perfectly followed by a passive-aggressive strategy from Crowe to show he loves his son but knows the world he needs to protect him from. Kidman is a perfectly quaffed Southern charmer who’ll turn into an angry mama bear at a moment’s notice and does so magnificently. This story does trail off in different directions but leads back to Jared and his parents, ending with love and forgiveness which is all that Jared and each and every other human being is asking for in the first place.