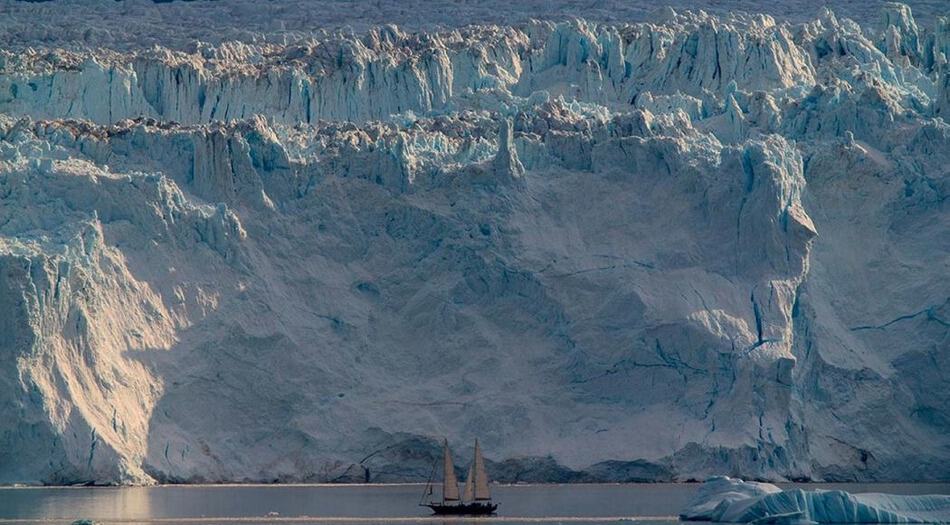 This movie is magnificent. Its essence is beauty and its message, sublime. The subject of this film is stunning in its might but also reminds us that it has an unforgiving disposition when pushed too far. This film shows us every one of those elements and more.

‘Aquarela’ is a must-see and I suggest you see it in the most significant theatre possible.

You’ll wither at the strength of water; you’ll witness its depths and watch it rise.

What’s most frightening is you also see how it’s responding to what people have continuesly allowed to happen. We’ve taken this gift for granted. It’s unfortunate, but it seems some people don’t care if it has the ability to thrive as intended. We’ve cared only for ourselves and ignored nature’s cry for help for far too long. It’ll be our undoing.

Watching water make attempts to sustain us yet fail time and time again due to our own actions is painful to see. If you can handle some cold, hard reality, director Viktor Kossakovsky doesn’t hold back the message here; we did this to ourselves.

In one of the most devastating openings I’ve seen in my lifetime, the Russian filmmaker opens on Lake Baikal in Siberia. It’s the oldest and deepest freshwater lake and, obviously, in the freezing cold Russian winter, the people often used it to cross from one side to the next. However, with the rise in global temperatures, now? Not so much.

There are several automobiles submerged below the ice. Victor’s team films one being pulled out and the rescue attempt of another. Then they see something moving.

With extraordinary work, they manage to zoom in close and film a vehicle crossing the lake. Knowing the fate of so many before it, you’re nervous for the people inside as its speed increases. You want so desperately to warn them. Your attention diverts to the film crew. They’re in danger, too! What are they thinking?! The ice turns to water beneath their feet. It isn’t long before the ice below the speeding vehicle breaks beneath them and it plunges into the lake. The team races to get to the people and rescue them. You’re a wreck at this point. What of the crew?! This moment was incredible to watch. Heartbreaking.

Then it makes a natural turn to the mighty melting icebergs. This section of the film got me. There’s no voice-over, no dialogue, no opinions. Nothing’s needed except for what your eyes take in.

Picture it. There isn’t a sound except for the cracking ice coming from the speakers. It moans in different timbres and octaves. The ice doesn’t want to die. It wants to remain. As it is, it has no choice but to heed to the desires of the unwavering sun.

It took great lengths to capture these images. There are piles of shattered ice melting. Chunks of ice, a beautiful shade of blue, fall into the sea below. It’s quiet again. Still. Then, ‘Crack!’ Devastation. It’s terrifying to watch knowing that the full impact and implications that come with this.

Your heart may speed up some. Your eyes may leak. Why?

This wasn’t filmed on some distant planet. These shots are captured from ours. It isn’t then, and it isn’t maybe. It’s now.

Have a tissue ready. This is powerful stuff. Icebergs that should take a very long time to melt away slowly are sweating like a jogger running a 5K in the Arizona sun. Victor even shows us the bottom of the berg now smooth in shape from being hugged by warm pockets of air where they shouldn’t be.

Is this the last of them? Will they ever return or are icebergs a thing of the past? Also, will this lake disappear?

The movie goes on to show other examples of the destruction water can cause when humans don’t care for their planet. It’s a hard film to watch but necessary to understand that what is happening can be stopped but that we’re running out of time to do anything to stop it. If there’s any indication of the dangers that lie ahead, it’s in the melting ice. None of this is normal.

‘Aquarela’ isn’t for everyone. There isn’t narration; it’s images, natural sound, and ambient music that depicts what’s going on in the moment. It’s slow but for a purpose. You must feel it. The music helps get you there. After every section,  the director has chosen to insert gorgeous music to signify the end but not of the segment necessarily. The songs he uses are for a purpose and to make one last statement. He uses strings, rock, and metal that when played during the iceberg segment seemed to suggest death. Yeah. Ours.

One moment, in the end, does give you hope that it isn’t the end for us. A rainbow appears. I’m not sure what the good is in this situation, but maybe the rainbow is there if we look hard enough.