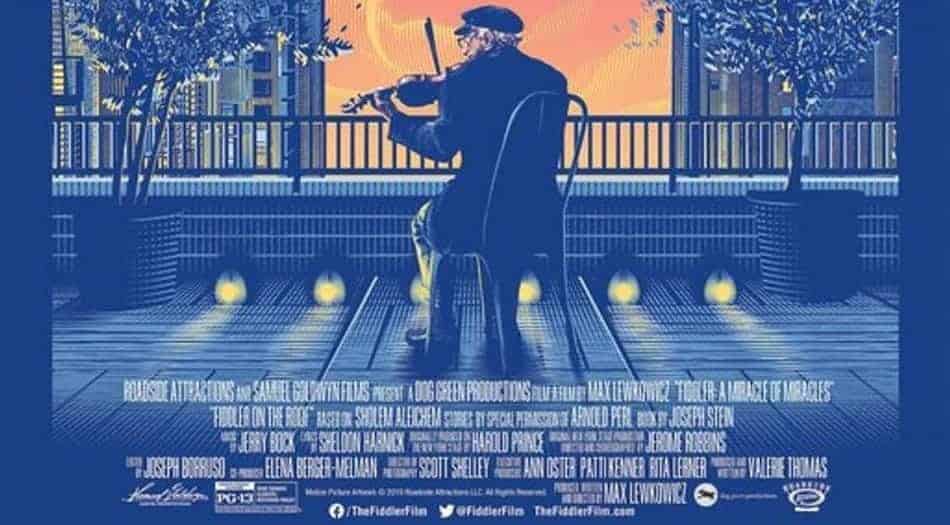 I must admit something to you. I have never seen ‘Fiddler on the Roof.’ I’ve never been interested, nor have I thought it would be very good. I like the influential musicals; the deep and meaningful stories that aren’t just fancy but really touch the heart. This show didn’t seem to fit that mold. Was I wrong!! ‘Fiddler’ is everything I just described and much, much more!

It’s steeped in history and rich with tradition. I’m almost embarrassed to admit I thought anything but. I saw Fiddler, I saw Roof and immediately, without hearing one note of music, judged it as blasé. Don’t do the same. See this documentary to get an eye-opening experience into the world of how this beautifully pleasing and historic musical came to be then check out the show! Look up tickets to see a live performance. I did. I’m going in January. Here’s some of what you’ll learn in this superb documentary by director, Max Lewkowicz.

Lewkowicz interviews many of the people who were involved in the show at one point or another. This docmentary includes the men who wrote the lyrics and the music which are Sheldon Harnick and Jerry Bock, respectively. The story was from a book written by ‎Joseph Stein. Harnick hopes people don’t look too closely at the book lest they see the words to this musical since he, kinda lifted them. If that’s the case, he did the right thing.
Lewkowicz also includes, and it’s fascinating to hear, old tapes of Bock sending Harnick a musical number that he hopes he’ll like. He actually says that he has about a half dozen ‘guesses’ and that the numbers are ‘spirited.’ To hear the part of the process where one of the biggest Broadway shows of all time is being born, felt very special. It’s hard not to begin to fall in love with the show as so many others have before us.
This doc dives into why certain songs were written and why they meant so much to people who were involved with the production. Many were touched in some way by what happened to them and/or to the Jewish people. The show is about why they had to leave their homeland. They weren’t immigrants. They were refugees and they were forced out of their homes.
As individual audience members watched the show, they were reminded of what they went through. The song ‘The Sabbath Prayer’ is such a moving song both lyrically and melodically that when violinist Itzhak Perlman speaks of it, he starts to tear up because it symbolizes so much.

When the musical was produced, the cost was only $250,000. That’s unheard of today. The show was directed and choreographed originally by Jerome Robbins. He was very touched by what the musical was saying and had creative, rather substantial ways, of bringing the underlying message forward.

Joel Grey directed ‘Fiddler’ in Yiddish. Grey, who’s an accomplished American actor, dancer, singer, and director says of the show that it speaks to everyone and becomes a favorite. I can believe that!
‘Fiddler on the Roof’ has been performed in many different languages. Since the shows debut on September 22nd, 1964, it has been performed every day. Somewhere around the world, you can get tickets and go see this brilliant show. Everyone should. It’s not just a show about people from the past; it’s about all timelines, including what’s going on today. It’s eerily similar, to be honest. There are a lot of historical facts given, and any history buff is going to enjoy what this documentary has to say. Everyone will appreciate it for not holding back on a powerful message we all must heed.

I’ve only touched the tip of the iceberg here. There’s so much to see in this splendid documentary. Like when the performers get together and stage a show for Ukrainian refugees and displaced peoples! That was heartwarming. The gesture floors them. It’s a blessing to witness.

This director. This show. These performers. Bravo. I hope it speaks to you, too.

Fiddler: A Miracle of Miracles