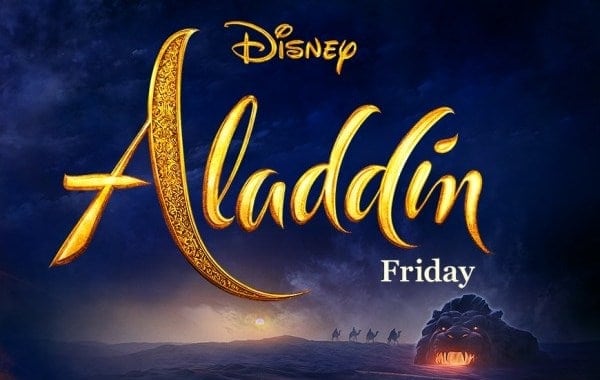 “Aladdin” is a new Disney live-action adaptation of the original Disney 1992 animated movie. The story is the ultimate in wish fulfillment, after all – who couldn’t use a Genie that can grant you three wishes? But the very successful animated version had several things going for it. There was a great story. There were great songs. And it had the great vocal talent of Robin Williams. With the updated version, it has two of those three.

Aladdin (Mena Massoud) is a ‘street rat’ in the desert city of Agrabah in a vague Mid-Eastern country. He is thief and a street hustler, making friends of the other poor folks in town – all while avoiding the palace guards. His little helper monkey Abu is with him everywhere. He runs into a person pretending to be just another poor beggar. But she is really Princess Jasmine (Naomi Scott) who can never escape from the palace to see the people in the street.  She is saved by Aladdin from a dangerous situation, and he goes with her to the palace.

Later that night Aladdin sneaks in and finds Jasmine with her loyal servant Dalia (Nasim Pedrad). But he is captured by Jafar (Marwan Kenzari), the trusted consultant to the royal Sultan (Navid Negahban).  Jafar and his equally evil parrot Iago find that Aladdin might be the one to get a special Lamp out of the Cave of Wonders. This Magic Lamp is said to contain a Genie, one that can grant three wishes to the owner of the Lamp. Aladdin is able to get the Lamp, and it is almost stolen by Jafar. 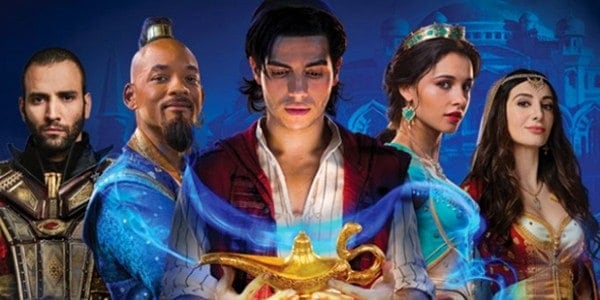 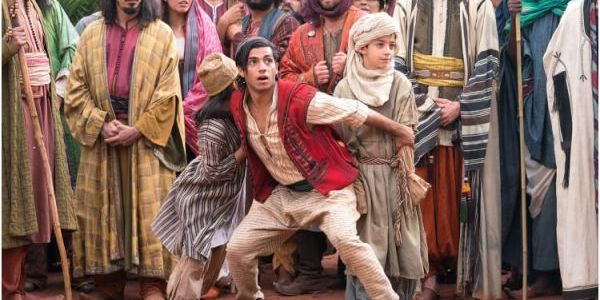 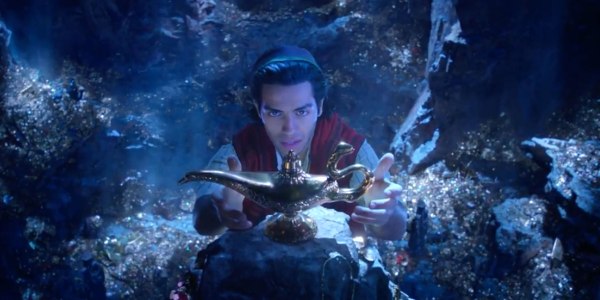 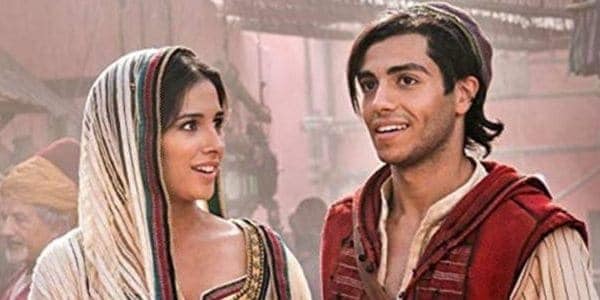 Aladdin finds the Magic Lamp does hold a Genie (Will Smith). He is all Big and Blue and he is waiting to take Aladdin’s order. He tricks the Genie to get them all out of the Cave, including a new member of the group – a Magic Flying Carpet. Aladdin does not want much, but he does want to meet and impress Princess Jasmine. Maybe if Genie turns Aladdin into a Price, then he could have a chance. Sure thing, he becomes Prince Ali, from Ababwa. The Sultan is very impressed, as well as all the people of Agrabah. But Princess Jasmine thinks that something is a little off with this new Prince. Jafar knows it is Aladdin and he begins scheming about how to seal back that Lamp.

Dalia is impressed with Prince Ali’s man-servant, who is actually Genie. Genie also becomes smitten with Dalia, so they both want Ali and Jasmine to get something going. But Jasmine thinks Ali is holding a secret, so he takes her on the Magic Flying Carpet to see the world, a ‘Whole New World’, that is. But before Aladdin can confess who he really is, Jafar decides to eliminate him form the picture. Genie is able to save Aladdin, as another wish gets used up. Aladdin had promised to use his final third wish to set Genie free, but that might not happen.

Jafar become more evil and more powerful, as he takes over from the Sultan. Hes has grabbed the Magic Lamp and he is now in control. Genie is no longer able to help Aladdin, so Aladdin and Jasmine might as well call the whole thing off. But does Aladdin have the street smarts to convince a powerful sorcerer like Jafar that he could become even bigger and more powerful? Could that be a way out for everyone?

This version of Aladdin has a nice cast and it redoes all of the great songs from the original animated version. There is even a new song for Princess Jasmine – one that gives her a stringer voice in her situation. Will Smith seems out-of-place at first as Genie. But within 15 minutes he takes this version of the Genie and makes it fit with his charm and sassy attitude. Naomi Scott has a very soaring voice that works wonders with her Jasmine songs. Mena Massoud is also charming as Aladdin and has a good voice.

Guy Ritchie as the director and co-writer is used to movies that have a rougher edge. His family-friendly version still has a couple of his visual traits (super slo-mo camera work). But most of the dirty and gritty features of his other films are glossed over with wild and bright costumes and bazaar scenes. The big musical numbers have a wild and over the top feel, like a cross between a Vegas show and Bollywood.

Remakes are becoming a big thing at Disney Studios, but rather than getting “A Whole New World”, this one just serves up “A Whole Lotta Sameness”.