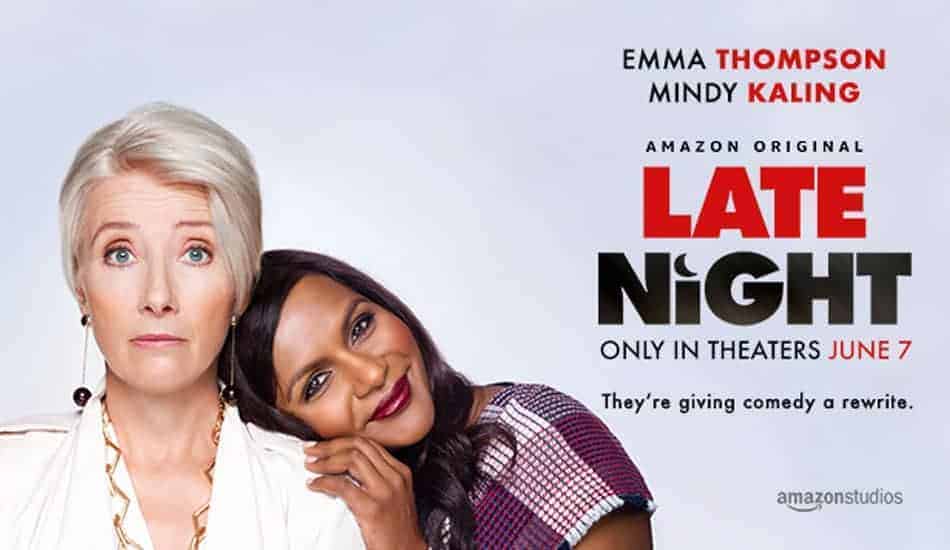 The highly energized, clever and witty film ‘Late Night,’ tells the story of the first and only female late-night talk show host named Katherine Newbury (Thompson). The script by, Mindy Kaling, is sharp and spirited. From the trailer, you could think this is just another office comedy, but I assure you it’s much more. As it dives into the main topic, an older woman looking at being replaced by a young, white, male comedian named Daniel Tennant (Barinholtz), it also covers the less than eclectic group of employees on her staff. Katherine’s incredibly well off from the success of her show and consequently has become rather disconnected from reality. Being tucked away in an office, surrounded by Emmy’s and other awards will do that to you. She primarily speaks only to those closest to her, consisting mainly of her husband Walter (Lithgow), she is now missing a key element of what made her appealing to her audience in the first place… empathy. In the simplest terms, she forgot where she came from and has lost who she is. Why is this? She enjoys her lavish lifestyle and run’s over the little people… crushing dreams along the way. When she’s told by the new head of the network, Caroline Morton (Ryan), that her show is now tanking she’s surprised. Not her show! She’s loved! She’s bewildered to find out this is not the case. Walter tells her she is! But when she goes to him and asks, he tells her the truth. Walter also gives her advice that she needs to work hard to make the people like her again. ‘They can’t replace you if everyone loves you.’

She starts by insisting that it must be the fault of the writers! She ventures into the writer’s room, most of whom have been there for several years and have never met her, to find out who to blame. She postulate’s that the problem is the lack of a female voice. In an effort to get to know them better, she assigns them numbers and She tells them to improve and barks an order to, ‘Hire a woman!’ A woman by the name of Molly (Kaling) is hired. When she sees her fellow writers, she knows she’s a diversity hire and is immediately treated as such. She’s strong and she’s capable but everyone is brutal, particularly her new boss. Katherine asks Molly her opinion of the show and though she’s a fan, she’s brutally honest and lets her know that it has gone downhill. Katherine demands that they live and breathe the show until they give her ideas that will improve it. From here on out, whether her shows and their jobs, make it or not is on them.

Molly has a difficult time fitting in but desperately wants to. Though it’s a hostile working environment, she refuses to give up. She wants Katherine to like her, so she goes out of her way to show her that she, Molly, is the writer the show has been searching for. She tells her that she needs to embrace social media, something Katherine has contempt for, and to show herself to the public by getting out on the streets. Get more physically involved. The men say nothing as Molly is attacked for her suggestions and is told to stop giving advice and start writing. At the same time, she desperately tries to improve her relationship with the other writers. She attempts to befriend them and affect the climate of the writer’s room, or as she sees it, the boy’s club by acting interested in everything they say. This might be even harder than breaking through Katherine’s stone-cold heart. Molly learns quickly where people are in the pecking order, how jokes are written and chosen and who writes for the monologue. She has always dreamt of being here and having her jokes chosen for the monologue is a goal she has always wanted to reach. Now that she’s here, is it all she hoped for? Things are quite hard for Molly but for Katherine, they’re getting even worse.

It’s impossible not to like this movie, its characters, and its intentions. This is a serious and comedic message presented to you to make you aware of the lack of diversity and change in the workplace… even when a female is in charge. There are many factors that make this film a triumph, however, I feel compelled to mention that chief among them are Kaling’s remarkable writing and acting, Thompson’s spectacular grasp and performance of Katherine and Amy Ryan’s vicious Caroline Morton. You’ll relate to many aspects of the characters and applaud their achievements. I must insist you see it this weekend.