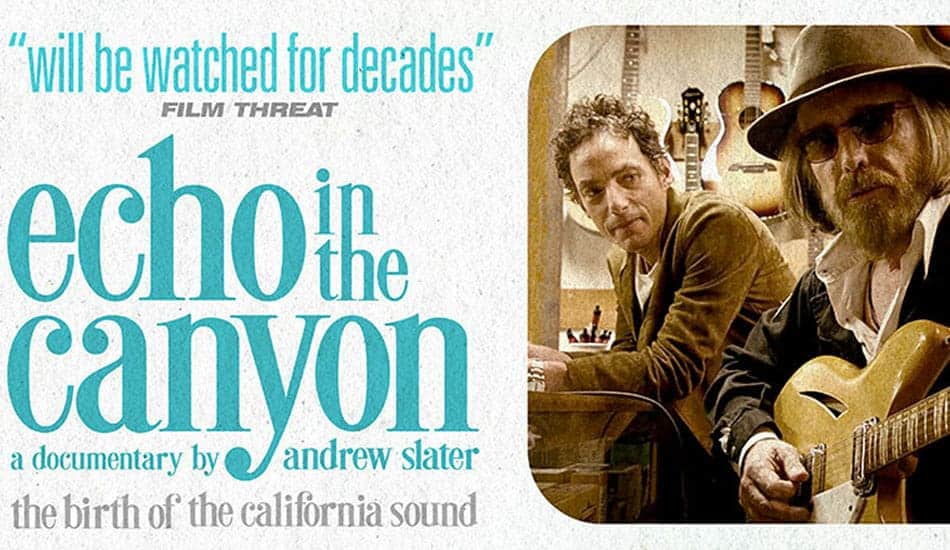 In this film, Jakob Dylan is on the pursuit to flesh out the initial roots of the California music scene of the 1960’s He finds that Laurel Canyon holds many secrets but a wellspring of information on the era he needs is in speaking to the artists themselves. If you appreciate musicians and the melodic and harmonious pieces they create (seemingly for you) at the time, and if you want to know how they accomplished constructing such exquisite masterpieces, again, for your ears… this movie will be a treasure.

‘Echo in the Canyon’ is intoxicating. One might offer that it’s only a way for Jakob Dylan to give himself a massive amount of exposure, but I’d have to disagree. While he is a producer and all over the film, he undoubtedly made this film because he loves and values musicians and the world they improve by adding uncommonly gorgeous notes that float through the air.

Here, he interviews the musicians from an era where the lyrics to the songs they played were exquisite poetry and the music was completely ambrosial. The music came from efforts made in Laurel Canyon, California in the ’60s. Everybody and I mean everybody, who wanted to be a part of music ended up there. It was a great location; beautifully and romantically tucked away in the hills yet still close enough to Sunset Strip to feel a part of that vibe, as well. The Bohemians of the time would meet at someone’s house, have a good time, get high, grab a guitar and create something unique and exceptional. Michelle Phillips of the Mama’s and the Papa’s said it was a ‘joy’ hanging out in Laurel Canyon and Graham Nash said it was an incredibly creative and healthy environment.

Jakob saw the movie ‘Model Shop’ and it reminded him of how much he loved the music of the ’60s. He resolved that he needed to record some of it and as he did, he decided his interests lay deeper and he wanted to know how this sound came to be. What brought everyone to Laurel Canyon? Who came first? This is answered and so much more. He tells us, ‘The Beach Boys were already here… I think The Byrds came out first and everyone else followed.’ Quickly, the film gets into personal memories of certain band members. Once you learn why certain songs were written and how they were recorded, you’re treated to Dylan singing his own version of the tune which I found to be simply sublime. When he isn’t recording or playing, you hear the original, see the cover of the album and are treated to inside knowledge of who a band was inspired by and who these bands themselves inspired. Here we go through the Canyon, drive near Capitol Records at night, and cruise the streets of L.A. The movie is cleverly designed to hold your interest with clips of ‘Model Shop’ and old videos but when the bands play the music, this documentary becomes something special.

Getting to hear Jackson Browne discuss Brian Wilson and Roger McGuinn tell you about The Beatles and when David Crosby admits to being an asshole is something you’ll never get to experience but this movie gets you there. It’s a glimpse into a world you’d never otherwise get to be a part of and so much more. Once it’s over, you’ll want to see it again. Since it also houses Tom Petty’s last interview, any fan of his will hold dear the contents within.

*Experience this on the big screen in Phoenix at Arizona Center 24!

Echo in the Canyon