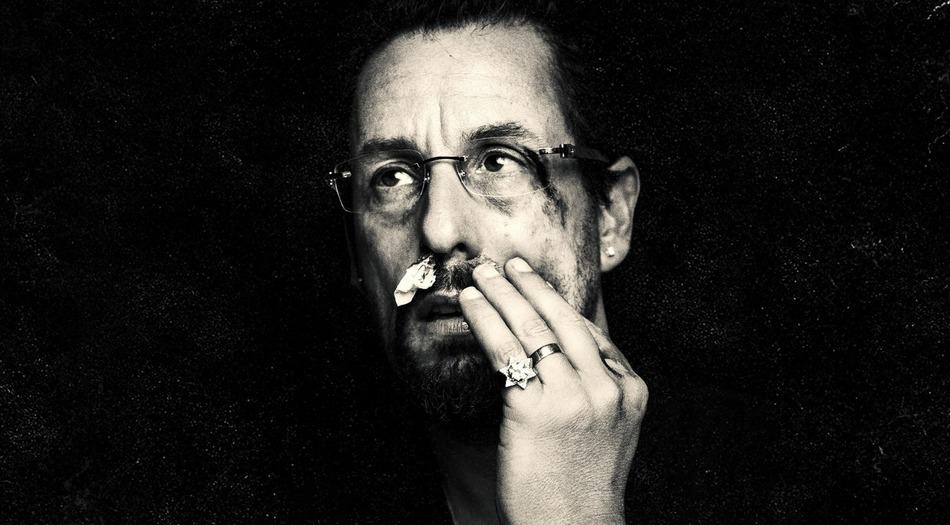 I know the holiday movie for you to see this weekend. Presents have been opened, bellies are full, so it’s time to get out of the house. Since we’re still with the family we’ve been stuck in the house with for the last few days; I suggest you go see ‘Uncut Gems’ with them. I’ll recommend it as a high-grade film.

It borders the line between top quality and rare, and, in my opinion, settles somewhere near the top of this year’s Oscar contenders. It gets very close, but it doesn’t quite make it into the top five. And it isn’t because it’s not a great film. This is choice and a must-see but, sadly, it came out during a year there are so many impressive films to choose from that it gets lost among the pile. With that said, I’ll answer the question you’ve been wondering. What is it about, and what makes it so good?

It’s about this insanely intense guy named Howard. When the movie opens, we meet Howard, who’s played remarkably well by Adam Sandler, and learn that he’s a jewelry store owner in the Diamond District of Manhattan.

Not too shabby, right? Well. You gotta know Howard. He can turn anything that’s on his side against him. During the film, you’ll see him continually do that very thing. It’s maddening.

Howard’s an immense bettor with an inflated ego. From the size of the debt he carries around, you get the idea that he isn’t very good at his favorite pastime. It’s made clear that Howard owes money to practically everyone in New York. He does know a thing or two about sports and about the worth of an item, which is important to know about him, but he doesn’t always know when to quit. He values his wife, Dinah (Menzel), but lives a semi-secret second life where he has a girlfriend, Julia (Fox), who also works in his store. When he’s not with one of them, he’s putting everything he can on the next big score.

Former Boston Celtics Basketball player Kevin Garnett, who plays himself in the movie, comes in looking for something unique. His visit happens on the day that Howard gets a delivery he’s been anxiously awaiting. The delivery is a precious Black Opal. The Opal was mined in Ethiopia and, though uncut, Howard estimates it’s about four or five thousand karats. He tells Kevin and his entourage that he could get about $3,000 a karat. It’s the score of a lifetime for him. He isn’t looking to sell, but the pitchman in him goes on and on about it, explaining that it’s at least ten million years old and that you can see the whole universe in such rocks.

Kevin doesn’t need to hear any more about the Opal. He makes Howard an offer. The Celtic feels he needs it and that he was drawn to the store to have the stone that he’s now connected to somehow.

Howard disappoints Kevin when he tells him he won’t sell it but, against his better judgment, does agree to let Kevin hold it until 9 in the morning of the following day.

Howard gets a little collateral by taking temporary ownership of Garnett’s 2008 championship ring. While being followed by bookies he owes money to, he immediately takes the ring and pawns it for over $20,000. He takes that money and puts it all on a sports bet. You already know he’s a gambler and a fool. Now you know he’s an idiot, too. The bet he makes is outrageous. Will it pay off? Will he lose the ring? Will he pay anyone back? You’ll be going nuts! The entire movie is like this, and it’ll keep you on the edge of your seat.

The biggest question during Howard’s journey is, what will happen to the stone? Will he lose everything he could have made off of it by bragging about its worth? The fundamental theme at play is, will Howard ever learn?? Is he capable of growth while juggling two lives? It’s hard to imagine the man not having a coronary struggling with his issues, but he’s made of stern stuff. At some point, perhaps he should seek some therapy. You’ll need to calm your nerves after watching what this guy puts himself through.

I could do without the rectal exam at the beginning but other than that, ‘Uncut Gems’ is structured impeccably well. It and Sandler grab and holds your attention right away. It’s one of 2019’s best! Directors, Josh and Benny Safdie put fake teeth in his mouth, which changes his appearance just enough so that you don’t immediately see the comedian Adam Sandler but find it easier to believe he is Howard. By the end, you’ll realize that it simply wasn’t necessary. Sandler’s performance is gripping, and it shouldn’t go unnoticed. You’ll never once see his comedic personas and not for a second is there anything comical about this Safdie film.