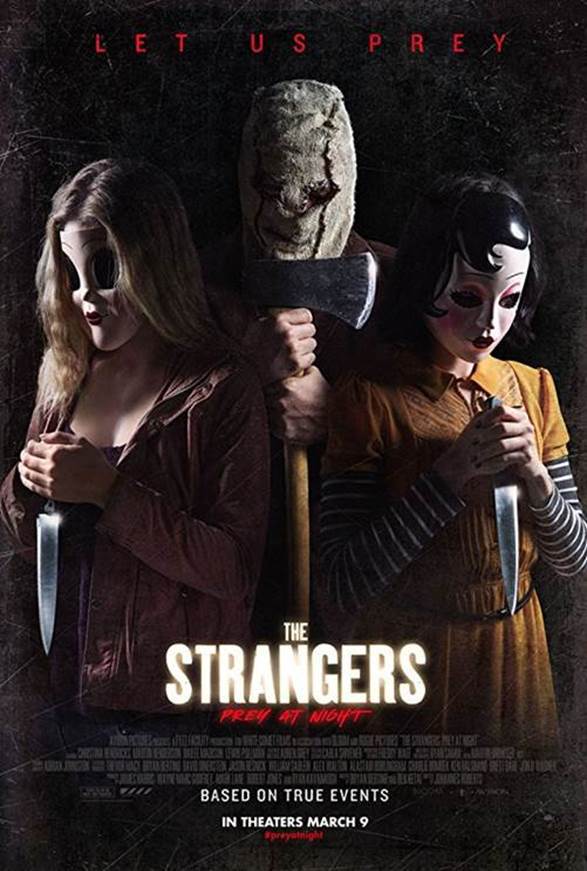 If you’ve ever read any of my reviews for horror films, you’ll know I base how frightening the movie was by whether or not I have to leave the light on at bedtime. This is a leave, at least, a nightlight on type of situation. The main reason for that is because if you let the main theme of the film, people out to kill you who won’t stop until they do, sink into your psyche it’s quite distressing and can interrupt one’s plans for a good night’s sleep. The movie played a part it in, as well, of course. It’s a decent horror but it did have its fair amount of eye-rolling scenes, mostly due to things the characters do that no one in their right mind would. If they hadn’t continually done, well, stupid things that make you periodically root for the killers, Dollface, Pin-Up Girl and Man in the Mask, the flick would most likely keep you up all night. The very thought that people would want to kill indiscriminately because they’re bored is terrifying. When asked by one of the characters why she’s doing what she’s doing, Dollface responds, ‘Why not.’

The original movie, The Strangers, written and directed by Bryan Bertino, one of the writers of this film, was unique and more frightening than this but its sequel is filled with just as much blood and as many jump-scares as its predecessor. Dollface and Pin-Up Girl seem to always come out of nowhere to wrangle this family of vacationers right where they want them to be able to torture them with ease. The first film, starring Scott Speedman and Liv Tyler, is similar in that they are a married couple who are terrorized at their vacation home by masked strangers. This time, it’s a married couple with two teenage kids, going to spend a vacation at a family members trailer park near a lake. What makes this all more frightening of a thought is where the premise of the screenplay originally came from. The Strangers came to Bertino because of two true events. Those of the Manson family, Tate murders, where several people were killed for being in the wrong place at the wrong time and also a series of break-ins that happened in Bertino’s neighborhood when he was younger, whereupon a stranger would knock on the door and ask if a particular person was home, just to see if someone was there. If no one was home at the moment, that was the place they hit. Combining these two ideas made it possible to construct a horrifying tale of unwitting victims unable to escape the circumstances they found themselves.

Christina Hendricks (Madmen) plays a mother named Cindy and Martin Henderson (Grey’s Anatomy) plays her husband, Mike, who decide to force their teenagers, Kinsey (Madison) and Luke, played by Bill Pullman’s son Lewis, to take a trip with them to a place where Cindy and Mike, more or less, have their kids to themselves. Well, they do get them to themselves but not for long.

They find that the trailer park is deserted and her uncle isn’t there to greet them so they’ll see them in the morning. It’s peculiar but god forbid anyone listens to the hairs on the back of their necks which are pointing the way out for them. They ignore their gut feelings and because of that decision, their family vacation never gets underway. The terror starts almost the very moment they get there… without a chance to play cards or reconnect. From earlier scenes, you can see that the siblings aren’t close but before long they’re having to save each other. They find themselves wandering alone, in a place they’re not familiar with, without help and no way to get any.

For the most part, it’s cliché (a wounded girl can’t run) and it’s highly predictable (the victims moves toward the problem not away from it) and I just can’t say enough how ridiculous it is that the individuals in this film’s scenarios put themselves in danger more than help themselves out of it. That said, if you like a good, fun horror, you’ll get plenty out of it. There are a lot of jump-scares and the occasional clutch-your-seat scene to make this a worthwhile watch. There was particular care in making sure you heard people struggling to live. That was a plus. Director Johannes Roberts puts you into the action in a scene where Luke is being attacked by Man in the Mask in a pool. We go under the water with him, briefly come up for air only to be yanked back under giving us that feeling of all hope being lost at the same time Luke experiences it. Eerie. I would like Roberts to explain one thing to me, though. Why on earth is Man in the Mask a big fan of Kim Wilde and Air Supply? Perhaps to remind us that he is just a normal guy under there or that he’s a touch on the older side? Whatever the answer, it was odd. So is the film. Watch it anyway but I’d wait for cable.