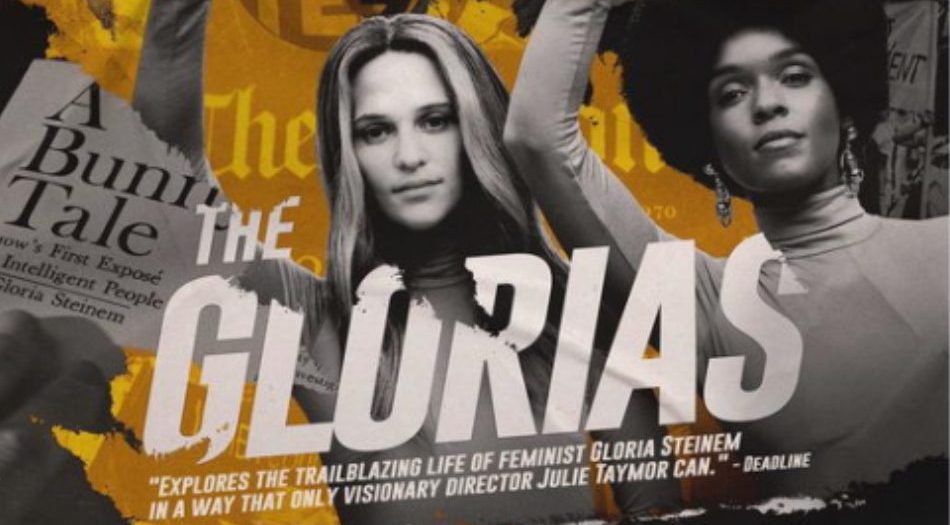 THE GLORIAS is available for purchase on Digital and Streaming exclusively on Prime Video starting September 30th.

“The Glorias” movie will tell you that Gloria Steinem is someone who looms large on the screen. So large, in fact, that the character needs to be by portrayed by four individuals. A child plays Steinem as a young girl, then another plays her as a teenager. Yet another person portrays Steinem as a young adult, and even later, she is portrayed by someone else. Through the whole tale, Steinem is shown being with the people who had influenced her. Then finally Steinem has grown into the person who has influenced an entire generation of women.

This unique approach starts with the very young Gloria (played by Ryan Kira Armstrong) who has an ill mother and a far-travelling farther.  Leo Steinem (played by Timothy Hutton)is a permanent optimist, and loves to just get by on the road. He gives young Gloria the appreciation of her self-worth and her boundless future. But when he leaves a trip to hunt gems, the care of her mother falls to teenage Gloria (played by Lulu Wilson). Seeing that her father is less then dependable, she decides that she will make it point to never have to depend on a man. But Gloria is able to attend college and becomes a writer.

Collage-age Gloria (now played by Alicia Vikander) spends time first travelling to India, so she can understand the strict caste system that keeps the women in submission. One of her first major articles becomes a sensation. Gloria goes undercover to work as a Playboy Bunny and she gets the scoop on the low pay, the long hours, and the harassment from the staff and the customers. She wants to cover the really big stories, such as the Civil Rights March in Washington. Along the way she meets Dorothy Pitman Hughes (played by Janelle Monáe). Hughes convinces Gloria to put her time and energy into the Women’s Movement.

Gloria becoes a speaker and an organizer. She meets a flamboyant Civil Rights lawyer named Florynce Kennedy (played by Lorraine Toussaint). Among all the people in Gloria’s inner group, they decide the best way for them to be heard nationwide is to create a new magazine. The publication is called ‘Ms Magazine’, and it becomes a success. Gloria also meets an up-and-coming politician named Bella Abzug (played by Bette Midler). Everyone in her group is fired up about Woman’s Rights, including the Right to Choose. Feminism has becomes Gloria’s cause, and she defends it with a passion.

When Gloria becomes a bit older (this time played by Julianne Moore), she is a solid leader of the Women’s Rights movement. She and her allies push for a “National Woman’s Congress”, and she meets even more important women leaders. She and her group at the Congress put their support into the ‘Equal Rights Amendment’. Gloria has many interviews and magazine articles. But she would rather shun the spotlight. She likes it to run the show, instead of being the Ringmaster.

But because there are four Glorias on the screen, that does not mean that they are separated by time period. The story has a running theme of all four Glorias, as portrayed by all four actors, be on a bus together. They talk and make comments of the different parts of Gloria Steinem’s life. They tell of the details behind some of the events, and how an older Gloria would have been able to respond better to snide comment made to a younger Gloria. This reflects on the different phases of the woman’s life, but also takes into account the author’s “My Life on the Road”.

This does reflect on a well-traveled life, but the screenplay (co-written by Taymor) and the direction (also Taymor) meanders into an untidy mess. The way that Gloria Steinem hops around her life, and into historical events – makes her appear to be a feminine Forrest Gump. Each actor does a fine job; however the character depth is about an inch deep. Much more character is revealed in the clothes and hair and makeup. The look of the college-age and older Gloria is perfectly done.

The overall movie (and the bus ride) about”The Glorias” becomes overly-long and excessive. There are more than a couple of sequences that do not fit with overall tone of movie. The movie drags with no real motivation to get to the next scene. There are a few interesting shots, and the way the time period differences are put into production was really good. There is no issue with any acting, just that story is not thought out.

“The Glorias” puts on display feminist icon Gloria Steinem, multiplied by four. But the poor writing and directing choices makes the long slog of a movie one that outlives its welcome.

THE GLORIAS is available for purchase on Digital and Streaming exclusively on Prime Video starting September 30th.