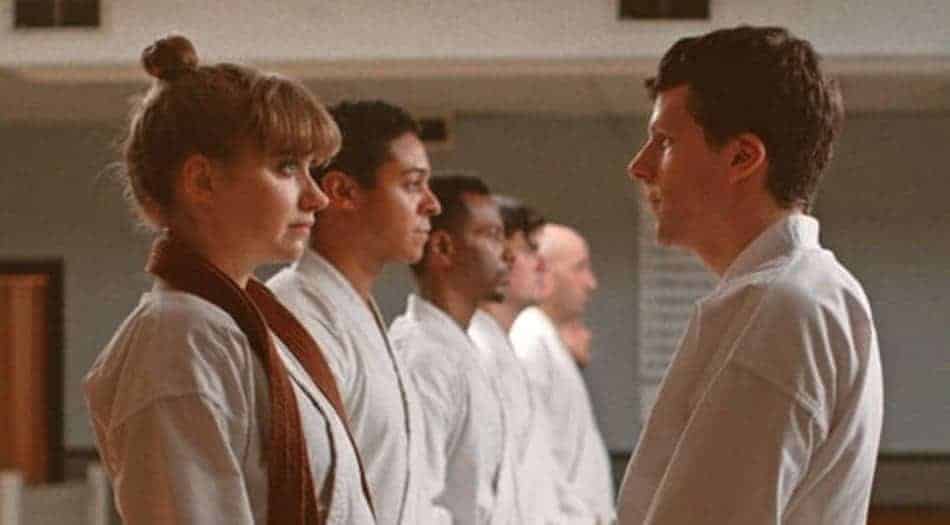 ​Riley Stearns’ new film ‘The Art of Self-Defense’ could be seen as untoward, almost depraved, because it’s so wicked. Don’t get me wrong with the words I’ve chosen to describe it. It’s wicked good! It tells the story of a thirty-five-year-old dog owner. I’ll stop there a moment. When you see the movie, you’ll see why I did.

Moving on. Casey (Eisenberg) is a weak, timid accountant who keeps to himself at work. Even so, he’s teased by the other men who see him as easy prey. Unable to hide his impotence, he does nothing to stick up for himself. He puts up with their bullying, hoping to avoid more confrontation. At least his Dachshund looks forward to seeing when he gets home from work. This particular night he forgot the dog food. It’s dark out but he decides to walk to the store anyway to get his pet his food. While walking back from the store Casey is mugged by a motorcycle gang for no apparent reason. He offers them his money, but they still kick him and punch him until they knock him out.

Tired of walking around with a target on his back, he looks into buying a gun to defend himself just in case this were to happen again. Since there’s a waiting period and he’s looking for something more immediate, he decides to take a peek at the local karate studio and see what they have to offer. The school is run by an inexplicably cryptic Sensei (Nivola) who, right away, gets personal with his students, intimidating them yet challenging them at the same time. Once Casey walks into the dojo and meets him, he’s enchanted with the idea of being a stronger man who can take care of himself. Sensei offers that and more. Through various mistakes, he learns how to properly behave while in the dojo. Having said that, I must mention that Eisenberg’s serious tone with the slightest, even silliest, of gestures and dialogue is emphatically effective. The way he handles this character is, in every respect, significant to making this movie work. I can’t imagine it being as good without him. Eisenberg’s antihero is perfect, and you celebrate his every accomplishment, though there are few.

The Sensei is overbearing and filled with testosterone, as are the other students. This is shown in startling scenes. Since he isn’t as masculine as Sensei would prefer, Casey centers his attention on the only member with estrogen, Anna (Poots). She’s quite aggressive for a female, as her Sensei insists she is, but Casey appreciates the stability she offers. After moving up to yellow belt status, Casey tests himself to see if he’s deserving of it. His confidence has been boosted but still, he questions whether he’s ready to face the kind of threat that led him to the dojo in the first place. He finds he isn’t.

Sensei then pries deeply and tries to not only find but also alter who Casey is on the inside. Once he breaks through what’s left of Casey’s resolve he tells him everything he needs to do to change. As he begins his transformation, the film becomes more brutal, the performances bolder and the humor atrociously fiendish. Casey embraces his newly formed backbone and sets out to justify advancing and being invited to the highly coveted evening class.

I can’t tell you much more. I want you to discover the brilliance I found this uncommonly peculiar film to be all on your own by watching it rather than reading about it. Have fun with the dark humor of ‘The Art of Self-Defense’ as it addresses Casey being attacked by the Machiavellian tyrant his instructor turns out to be. This type of storyline is unmatched by any filmmaker of late and has one hell of an intriguing twist. I highly recommend.

The Art of Self-Defense