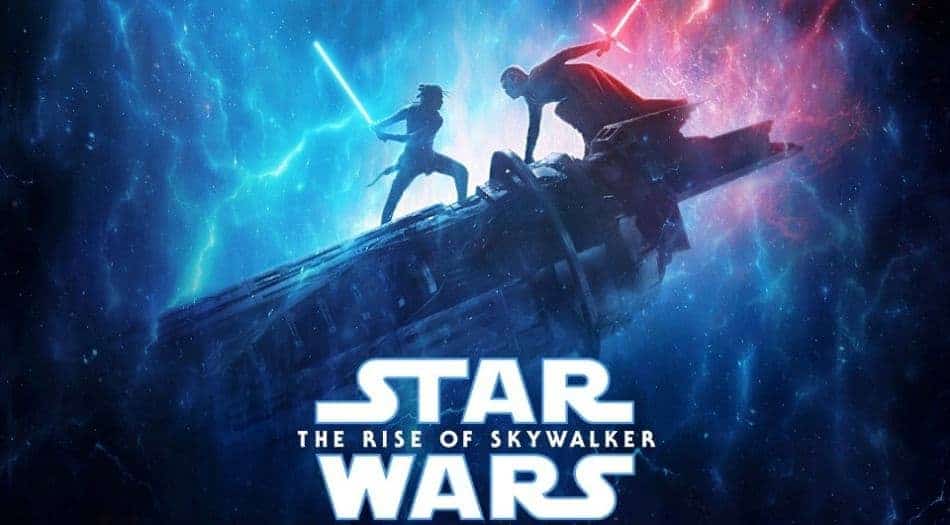 “Star Wars: Rise of Skywalker” is episode number Nine of the overall Star Wars movie series, the ones which have concentrated on the “Skywalker Saga”. Since George Lucas began this effort in 1977, there has been a mixed bag of results. Now, with this movie, the story of the Skywalker clan is complete.  The old is returned to be with the new, and the massive group of fans can be satisfied. But will they see an “Excellent” movie? Or will it be merely a “Good Enough” movie?  “Many Bothans died to bring us this information”, but the information has been turned into the final movie in this Trilogy. Will you say “I’ve got a bad feeling about this”?

“Star Wars: Rise of Skywalker” relies on the viewer knowing quite a bit about all the prior movies. That includes the recent two entries (“Star Wars: The Force Awakes” and “Star Wars: The Last Jedi”). Also, knowing the original Trilogy will help out too. So first – a run down on many of the characters. Rey (Daisy Ridley) – a Force-sensitive woman who was training with Luke Skywalker (Mark Hamill) – one of the original characters. Luke is a Jedi who is now gone, but he has a sister Leia (Carrie Fisher). Leia is one of the original characters, and now she trains Rey and commands the Resistance Forces.

Leia is assisted by two droids named C3PO (Anthony Daniels) and R2-D2 (also original characters).  Poe (Oscar Issac) is a Resistance pilot, and Finn (John Boyega) is a former Stormtrooper turned Resistance fighter. The bad guys are the ‘First Order’, led now by Kylo Ren (Adam Driver). Ren was previously known as Ben Solo. Ben is the son of Leia – who married Han Solo (another original character is no longer around). Oh yeah, there is also (an original character) Chewbacca (called ‘Chewy’)…

But also still around is (an original character) the evil Palpatine (Ian McDiarmid). He was though dead long ago, but he has strong Dark Force powers, and lives to threaten the entire Galaxy. Kylo Ren wants to find him and destroy him, so that he will be the new (and only) leader of the First Order. Rey wants to also find him, so that she can destroy him – because his Dark Force powers are going to enslave all of the worlds. But to find the long dead Emperor – both of these people will need to use cunning and skill. Or just be like Kylo Ren and use brute strength and kill anyone who stands in your way. Rey instead relies on her friends to help her find the hidden thing that will get her to the hidden place.

Rey and Poe and Finn, along with Chewy and C3PO, travel to many worlds and see many things. They find clues, and are not able to translate the clues. They go someplace else to find an old friend of Poe. Zorri Bliss (Keri Russell) is someone who knows someone, and soon they are on to a new place. Kylo Ren is keeping tabs on them, and Leia is back in the command center also keeping track. R2-D2 is helping her out, along with Maz Kanata (Lupita Nyong’o). But there is too much to process and she becomes ill. Rey and Kylo Ren find something very old, and they do battle one-on-one.

There is a lot of movement and motion, along with lightsaber fighting, and spaceship battles. All of these will eventually get to a major goal (you hope). When the final part happens, it is an EPIC battle of Star Destroyers and thousands of smaller ships. There is a showdown with the evil Palpatine against Rey (and against Ben Solo – not Kylo Ren). There are fights with large First Order armies, and they are fighting against more Resistance Forces – include fighters riding alien horses. Lots of exposition happens for the first two hours, and a scatter-shot hide-and-seek game is played between Palatine and Rey. But when the end finally comes, it comes with a satisfying closure.

“Star Wars: Rise of Skywalker” has a lot leading up this point, and it has a lot at stake. Based on the prior movie (“Return of the Jedi”) there were many things that needed to be explained (and some things that needed to explained away).  J. J. Abrams, with co-writer Chris Terrio, put up a major fan-friendly script that goes heavy on the exposition. But it seems a little subdued in terms of character arcs. As the director, J. J. Abrams gets the human side front-and-center just enough to keep you interested.

Given the fact that Carrie Fisher has passed away during production, they were in a bind. They were able to use some older footage (from prior movies) and seamlessly give her character a functional story. She is given a very honorable place in the Star Wars world. There are other original trilogy actors that also get a comeback. Another on is Billy Dee Williams (Lando Lando Calrissian).  Perhaps you might see another face that you remember?

Fan favorites abound, with almost all the original cast getting a brief moment or two in the movie (one way or another). Plus there a few shots some of the favorite creatures, including a glance at some Ewoks, and even some Porgs. Sorry, nobody spotted any Gungans (like Jar Jar Binks).   Rey even shows up on Tatooine at the boyhood home of Luke Skywalker. Many fond memories delivered by the ‘Ghost of Star Wars Movies Past’.