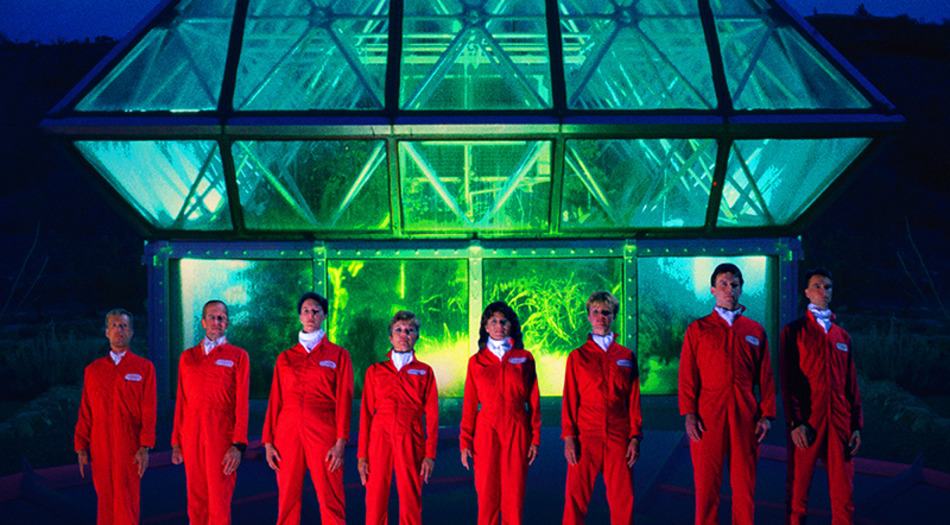 ‘Spaceship Earth’ is a documentary about a group of eight people who walked into the Biosphere 2, near Tucson in 1991, which was a large replica of our planet’s ecosystem, to emerge two years later having sustained themselves.

The new Noah’s Ark with the Garden of Eden built inside. Is this a new way to live? Will it be used in space? Who knew but you start with the experiment first, right? The food they ate, the water they drank, the air they breathed, and all waste of any kind, everything, was reused and recycled. The film not only centers around the eight individuals who locked themselves inside of a self-sustaining chamber, but it’s largely about the group of creative, theatrical, intelligent (and a bit eccentric) people who came up with the idea. The idea, by the way, sprang up from a conference they attended regarding climate change. The troop met twenty-five years earlier in San Francisco, building friendship, love, and community among one another. They also took care of the land that they lived, themselves. The ranch was called Synergia.

They weren’t too keen on only being known for being consumers. They loved science, theatre, music, creating things from nothing, and felt they had a small window of time to zero in on one and leave their mark. They couldn’t decide on one, so they decide to do it all, which is when they form their ‘Theatre of All Possibilities.’ John Allen, out of Oklahoma, was their larger than life leader. He could get them to follow him anywhere, and that’s where he takes them… everywhere. The group grew to include incredibly brilliant people who helped make the ‘Synergists’ prepared for any task ahead. One by one we are introduced to them and they’re interviewed throughout the film.

These young people build a ship named the ‘Heraclitus’ and set sail for other parts of the world to leave their mark. Admirably, as they landed on other shores, they gave to the communities that welcomed them. They contributed by building a hotel in Katmandu, an art gallery in London, a rainforest in Puerto Rico, and even had a property they took care of in the Australian outback. In fact, they still have most of these things. But I’ll try not to get too ahead of myself. Unlike most, by traveling as they did, they were given the chance to know the entire planet in an experiential way; a task they aimed high to achieve. It was these early days that haunt them when a few things go wrong with Biosphere 2, years later.

Through their moneymaking ventures, they meet Ed Bass, a Texas oil heir. Ecological matters were especially important to him and when it came time to building and launching the Biosphere, thinking of where the experiment could ultimately lead, he was more than happy to contribute.

They built a team of people to go inside the Biosphere where they helped to build a coral reef, rainforest, gardens, and plants for their food, and carefully selected animals. Getting to the point where they’re inside the Biosphere felt as if it took forever to reach because director Matt Wolf uses a lot of fascinating yet drawn-out archival footage, pictures, and news reports to tell his backstory. Showing them inside the Biosphere and what they say about life inside was captivating. They spoke of how they fought as the oxygen was getting low and how they had to eat beets more than anything because it grew the best. They were beginning to resent John Allen because they were ‘starving and suffocating’ to death.

The ultimate message of ‘Spaceship Earth’ is we have a job to do if we want this planet to continue to thrive and sustain humanity. Have we learned anything? If there were lessons to be learned from the Biosphere 2 that we could use in helping us survive this world, you’re not going to like what happens at the end.