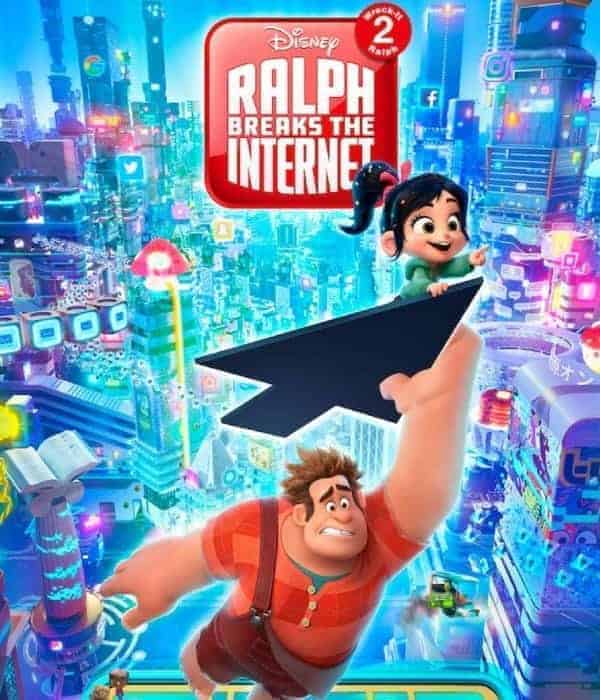 “Ralph Breaks the Internet” proves that Disney Animation can make a sequel based on its legacy of great movies, and does not “Wreck-It”. “Ralph” is a follow-up edition to “Wreck-It Ralph”, which introduced some arcade video game characters. It had a smart story line and large group of quirky, yet lovable, characters. This new update to the continuing “Ralph” story takes two main characters beyond the walls of Litwak’s Arcade. They venture out into the Internet, which Ralph promptly breaks… The online community is not ready for the big, lovable doofus of Ralph, so he takes the Internet by storm.

In the first movie (“Wreck-It Ralph”), Ralph (John C. Reilly) has a job in an arcade game called “Fix-It Felix Jr.” Felix (Jack McBrayer) has met his true love Sergeant Calhoun (Jane Lynch).  Ralph’s best friend is Vanellope von Schweetz (Sarah Silverman), who is go-kart racer from “Sugar Rush”. Vanellope has a ‘glitch’, which gives her unusual functions. She is tired of her life in the Sugar Rush game, and she would like to see much more of the world. Ralph is very content with the state of things, while Vanellope needs to expand her horizons.

After a part breaks on the Sugar Rush game, Mr. Litwak (Ed O’Neill) is forced to unplug this game. All the characters rush out and now are homelessa. Litwak has just installed a router that connects to the Internet, so Ralph and Vanellope find their way into it. They have heard that a new part can be purchased on-line for the Sugar Rush game. They intend to go to that website and bid for that part. But when they bid way too much, they need to find a way to get money to pay for it. Ralph finds a site called BuzzTube, and it is run by an algorithm named Yesss (Taraji P. Henson). She explains that Ralph can become an Internet sensation by creating viral videos. That could get the money they need. 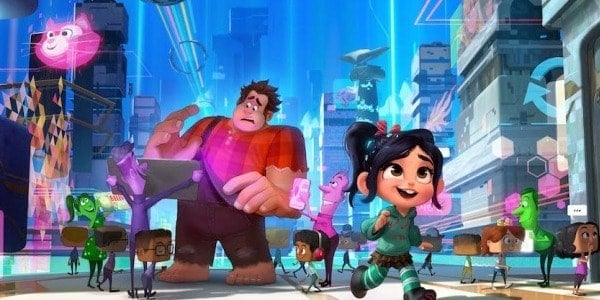 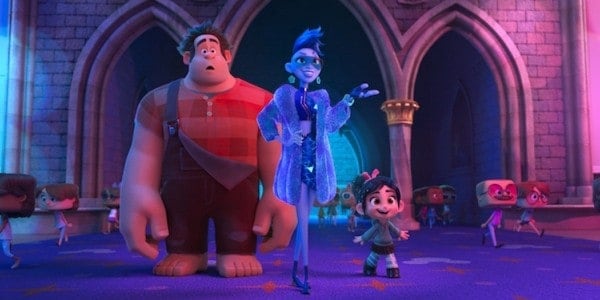 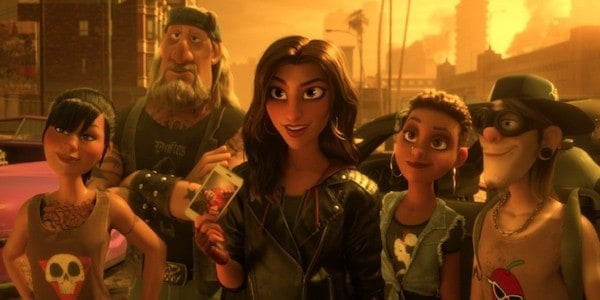 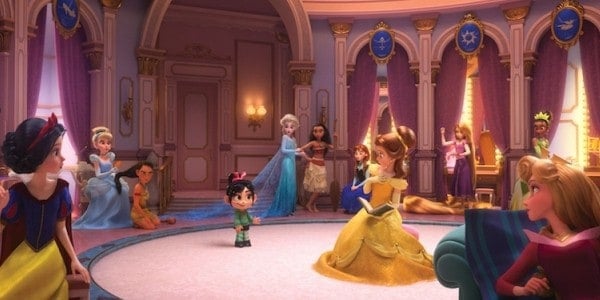 Vanellope and Ralph also find an online video game called ‘Slaughter Race’. It is dirty and grungy and there are no rules. Vanellope thinks it is the perfect world for her racing future. The best racer in that game is named Shank (Gal Gadot), and she has the best car and best skills. She and her crew raise havoc with all the online gamers, because she always wins. Vanellope has met her match with Shank, and she wants to stay in Slaughter Race forever to race her heart out.

When Vanellope goes to a Disney website and meets with all the other Disney Princesses. She likes them all, and they accept her as another real Princess – but she does not feel at home there. Ralph just wants to buy that part to fix Sugar Rush, and then get home to his game. But Ralph begins to worry that his best friend Vanellope will not be coming with him.

Ralph lets his worry and his doubt take over, and he does something really dumb. He wants to convince Vanellope that she should come back to the arcade with him. But Ralph’s plan backfires, in a really big way. The Internet is threatened by the bone-headed move that Ralph makes, and Vanellope is in real danger. Shank tries to help Vanellope, and also later on the Disney Princesses come to her rescue. Ralph finally learns a big lesson that friendship is stronger than distance. Vanellope can still be his best friend, even if they are in two different places. The Internet is saved, and Sugar Rush gets repaired…

“Ralph Breaks the Internet” takes the characters from the first movie and gives them a new and expanded universe to explore. Getting the two main game characters (Ralph and Vanellope) into the Internet-at-large is a terrific concept. Ralph is a ‘fish out of water’ type, while Vanellope embraces all that the new horizons can offer to her. Because this is a Disney movie, all of the properties they own (Marvel, Pixar, Star Wars, Disney Princesses, Winnie-the-Pooh, and others) all make a brief appearance.

John C. Reilly does the voice of Ralph, and he proves himself to be a work horse, not a show horse. He is a steady and reliable character voice for the big lug, and it fits him perfectly. Gal Gadot does the voice of Shank, the attractive and super-cool driver in the ‘Slaughter Race’ online game. She is strong and capable, and she becomes a new friend to Vanellope. Taraji P. Henson plays Yesss, and her character is quite quirky. She searches for the next huge viral video, and she encourages Ralph to become a video star.

But then we come to the weakest part of this movie. Sarah Silverman does the voice of Vanellope. But her character’s voice is such a whiney, nasally and annoying voice that it can grate on your nerves. In the first movie, this character was introduced about midway into the stroy. So Vanellope’s voice gets a LOT more screen time in this movie. Vanellope is supposed to be cute and precocious character. But she leans heavy into being more annoying than sweet. However, her character and Ralph are the main two roles, so you get much, much more of the least enjoyable voice in the bunch.