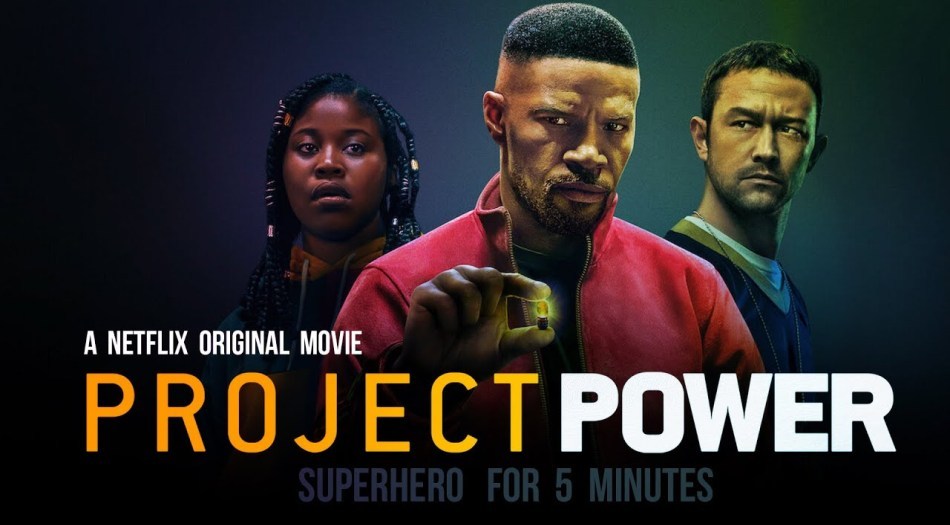 “Project Power” is an action-filled movie where human superpowers can be delivered in a pill. The drug on the streets can make you invincible, for five minutes at a time. But for some people, it can make them super dead. But when the wrong folks get a hold of it, it can make New Orleans look like a Mardi Gras hangover.

Robin (played by Dominique Fishback) is a street-wise girl from the Ninth Ward in New Orleans. She wants to be a rapper, and school is getting in the way of her music career. So to make some dough, she sells some dope. But a NOPD officer named Frank (played by Joseph Gordon-Levitt) sees the pills that she has to offer – he gets a bit worried. There is a pill called Power. This pill sells for a lot – but it gives you a lot more. Some people take it and, for five minutes, they develop some sort of superpower. Once in a while, they end up dead.

Some shady guy named Biggie (played by Rodrigo Santoro) is getting all the Power out for distribution. Robin’s cousin gets the pills and makes her sell them. But there is a mystery man called “The Major”, a former Special Forces guy named Art (played by Jamie Foxx). He is out to find the people in charge of the illegal drug. Biggie has lots of small dealers, and plenty of paid-off people inside the police force. Officer Frank is not one of those on the take. Art finds Robin and wants her to get deeper into the Power cartel. Things go very wrong, and Robin learns how ruthless Art can be to his enemies.

Robin learns that Art is really looking for his kidnapped daughter. She has the key to unlock the superpower pills, and the cartel will never release her. Art and Robin both see that they want the best things for their loved ones. Art just goes about doing that in a more brutal and bloody way. Frank and Art meet, and both determine that the police force is taking orders from the cartel. Robin and Art and Frank and all now locked into a quest to find Art’s daughter and to make the people behind all these nasty pills meet their just ends.

The three of them are determined to take the fight to cartel group and get right up close to the people in charge. They are going get into a rough spot, and more than likely – there will be quite a few dead bodies left over. Robin has never felt like she could make a difference in the world before, but now she sees that she can help save the lives of lot of people. Art wants nothing more than to see his daughter again, and to get her back safe. Frank wants to take this rotten scummy cartel group out of his city.

“Project Power” has taken an absurd, yet interesting, plot device. What if there was a pill that could do something really cool, like make you invisible, or make you super strong, or give you super speed, or an ability to control fire, or have power over ice, or a million other things. It’s a wacky idea, but it plays out as an action-packed thriller. The story moves swiftly and lets people know just what they need to know at that point. The action set pieces are very explosive and are done well.

Henry Joost and Ariel Schulman (both as co-directors) have made other movies in the past that have lagged in pacing (“Catfish”) and been too much style over substance (“Nerve”). But with this movie, they seem to have hit a sweet spot. There is just enough fancy camera work and odd angles to keep your interest, and not too many that could make it annoying. They have taken the script (written by Mattson Tomlin) and given it enough flair to make spiral like a firework.

But grounding this movie is performance of Jamie Foxx (playing Art). He is a growling monster of a man, but only driven by the desperation to get back his daughter. He is vicious and single-minded. Yet, after he meets Robin, he shows a soft side. Dominique Fishback (playing Robin) portrays a young woman of color who wants the world to take her seriously. Yet she is unsure how to make that happen. But she is equally determined that she will make it happen. Joseph Gordon-Levitt is also a good addition (playing Frank). His role is less critical, but he shows that an honest cop who has a dark side can pick up the pace. His idea to fight fire with fire – or in his case fight Power with Power – gets him into battles with the bad guys who have used the pill.

“Project Power” is worthwhile effort to create a ‘superhero’ style umbrella under which the stories of Art’s quest to find his daughter are meshed with Robin’s desire to become a help to the world and Frank’s need to clean up the city.

@peepso_user_48180(MovieReviewMom)
This was my take on the movie: IN A NUTSHELL:

This is the third movie collaboration between Machine Gun Kelly and directors Ariel Schulman and Henry Joost. The power in this project is the two power-house actors Jamie Fox and Joseph Gordon-Levitt, plus a surprising young starlet, Dominique Fishback.

I’ve read some reviews that think this movie is terrible, but I disagree. It’s definitely not perfect, but it serves as an entertaining… Read more
This was my take on the movie: IN A NUTSHELL:

This is the third movie collaboration between Machine Gun Kelly and directors Ariel Schulman and Henry Joost. The power in this project is the two power-house actors Jamie Fox and Joseph Gordon-Levitt, plus a surprising young starlet, Dominique Fishback.

I’ve read some reviews that think this movie is terrible, but I disagree. It’s definitely not perfect, but it serves as an entertaining distraction and something new to watch on Netflix during this pandemic when we’ve all seen just about everything on streaming already.

Drug and dealers
A LOT of violence
Some texting young kids wouldn’t be able to read fast enough. But seriously, your kids shouldn’t watch this anyway.
Several brutal deaths with blood. High body count
Some profanity, although an “F-bomb” is cut before finishing a few times.

THEMES:
Power
“You gotta do what you do best and rock that.” – Art (Jamie Foxx)
Family
Everyone is unique with their own special powers.

THINGS I LIKED:
The premise of the movie is super cool. Would you take a pill if it gave you superpowers for 5 minutes? Well, the tiny detail is that it MIGHT give you superpowers or it might kill you.
Good special effects as people get instant powers. I loved the “glowiness” of the pill.
I expected nothing but excellent performances from Jamie Foxx and Joseph Gordon-Levitt. I adore both of them and wasn’t disappointed. What surprised me was Dominique Fishback’s performance. Some movie critics thought she was annoying, but I thought she did a great job.
There are a few funny scenes that caught me off guard because I was expecting pure drama and action.
Cool (pun intended) action sequence filmed from behind icy glass.
Lots of action.
A timely scene about race and the police.
The pace is very fast, which keeps things moving.

THINGS I DIDN’T LIKE:
Some viewers who dislike the movie mention the nonsensical plotlines. There are holes, for sure, but the story does make sense.
The action scenes aren’t anything we haven’t seen before. They go on for a while, so you begin to feel a bit numb to it.
Educators will be shocked by a teacher’s approach in the classroom.
Parents will be shocked by a message that seems to tell kids to drop out of school and become a rapper.
The movie Limitless explores some of the same things but was soooo much better. Even the TV version of the movie was better than this.
It takes a LONG time to explain how things are related.
Some of the CGI isn’t that great.

@peepso_user_45175(JMcNaughton) MovieReviewMom, you have a great way of putting into words what you think of the movie. So, your input is very much appreciated. Seeing that all the "Big Summer Blockbuster Releases" for 2020 have been put into quarantine, "Project Power" is an (imperfect) substitute for a 'popcorn flick'. More 'Power' to ya - I say!