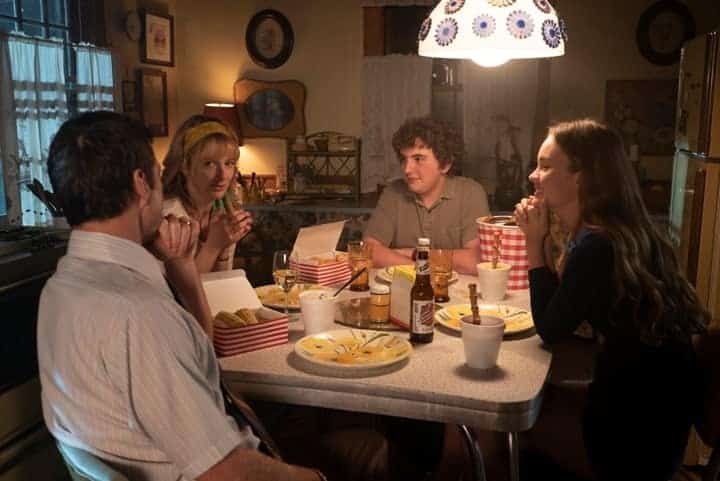 The film ‘Measure of a Man’ is an adaptation of the book ‘One Fat Summer’ by Robert Lipsyte. It’s directed by Jim Loach, whose father Ken Loach has been working in the film business for over fifty years. Seeing this movie makes me certain Jim will have the same kind of staying power. Jim had writer David Scearce write the screenplay and make some changes to it to create a more relatable world for him to work with. Doing this has made his twenty-second directing achievement a triumph. His casting choices also helped. Topping off a fabulous cast of young actors whom you may not know quite yet is Judy Greer, Luke Wilson and the crème de la crème, Donald Sutherland.

‘Measure of a Man’ is set in the 1970’s and is a story about an awkward teenager, Bobby Marks (Cooper), trying to fight bullies and his own lack of confidence to grow up and become a man. Depending on how one interprets that, what he wants to do is be helpful to those around him and be a good person but has so much anxiety, he can barely help himself. He’s overweight, uncomfortable in his own skin and outside of his mother (Greer) and sister Michelle (Liberato), is too nervous to talk to girls, save one, Joanie (Danielle Rose Russell), who he grew up knowing. He knows Joanie because his family gets together every year with hers after upstate travel for summer vacation brings them together for picnics, swimming and county fairs. The chubby kid certain that one day her acceptance of him over summer break will blossom into love.

However, this summer, things are different. A lot has changed. Bobby hasn’t changed but other things have and he’s even more uncomfortable. The people upstate have finally let the vacationers know what they think of their visitors, the locals are harsher and less tolerant of the mess they leave and find an easy target in Bobby to take it out on. Joanie frightens Bobby more than anything a thug could do to him. She has matured and is now taking off for a month and won’t explain to him why. Heartbroken, he gets a summer job helping Dr. Kahn (Sutherland) with his lawn and basic yard maintenance. It’s this relationship that becomes the turning point of the film. Kahn is a rich elite who you think is being severe but you come to realize, through his own experience, he’s guiding him into manhood. Kahn also accidentally stumbles onto a sort of friendship he wasn’t quite expecting.

The characters in the film are well thought out and the acting is convincing. Bobby and Michelle’s relationship as brother and sister is hateful yet compassionate and Cooper and Liberato’s performances are spot on. Loach is largely to thank for pulling performances out of his young cast that keep you both amused and captivated. When feeling for the poor youngster, you’ll also feel inflamed when he’s confronted with more than he can handle. I like the movie and believe you will, too. Jim Loach knows how to handle a story. This movie is potent and effective and one not to miss. Include ‘Measure of a Man’ in YOUR summer vacation films.

READ MY INTERVIEW WITH JIM LOACH AND LIANA LIBERATO