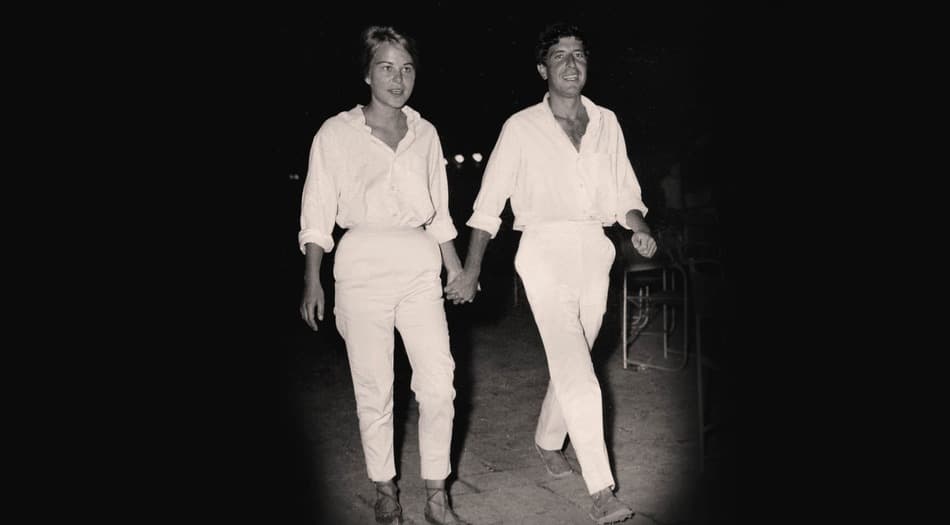 I’ll jump right in with letting you know that I thought I was going to write a review that spoke more or less of singer-songwriter Leonard Cohen’s talent. However, as the words went from fingertips to keyboard, I found that they weren’t so friendly toward the artist. Let me say that outside of the film being slow at times, you’ll be enthralled with this documentary but won’t be so crazy about its subject by films end. This should be titled, ‘Anything but Words of Love.’
To his Norwegian muse, Marianne Ihlen, that’s who Leonard was; a cold, selfish lover who thought of no one but himself. Sure, he appreciated her in some way, mostly because she fed his narcissistic ego, but people, women especially, were there for his amusement. Be what he needs and you’re in. Marianne was a keeper as long as she didn’t want too much of him.
When they first met she thought little of herself so he indulged her in some beach time and a little wine and fancy words but that was about it. After he had her hooked that all stopped. He saved his energy for his fans when he was on stage and for them backstage when he was leading them to his hotel room.

I was moved by the ending, by her, and wanted so desperately to believe that Cohen loved something more than his music and himself but couldn’t find proof of that from what I had just watched. For a man who could write a song like ‘Hallelujah,’ which has since been recorded by 300 artists, that’s disappointing to find out. Speaking of, producer John Lissauer helped him create the song yet Cohen left him out of getting any of the credit and any of the royalties. The doc makes it sound as if it was the fault of the record company, which may be, but in straightening the course this too could have been corrected. It’s shameful that Cohen didn’t bother.

Deep into the film, Leonard talks about the age he lived in. That he was lucky it was the time of free love. ‘I had a great appetite for women. I was very fortunate because it was the ‘60s. I was lucky that my appetite allowed men and women to come together in the kind of union that satisfied both the appetites.’ While he was being fulfilled, there was a broken heart who wanted a piece of him yet he had nothing left to give. Examining their life together, you see where they were both to blame. She loved him so much that she let him treat her as if she wasn’t special and he thought that only he was.
Though she was the muse, he was with her very little. They lived separately and when he was at the highest point in his singing career, she wasn’t welcome to share. Knowing the ultimate reason why she chose to stay away.
The audience is informed that everyone wanted a piece of him. The women loved him for his charisma and good looks and desired to be with him. What Marianne wanted was to cage him, have him all to herself. She struggled with what the relationship was doing to her and she was jealous to the degree that she was in a very dark place. She said she was, ‘On the verge of killing myself because of it. I wanted to die.’
While she waits, Cohen mentions how he never enjoyed celebrity. Well, you can’t tell that from the footage here. He is so high that he leaves the stage insisting that he isn’t ‘feeling it.’ He won’t go back until he does. A deep thought enters his drug-addled mind. Time to shave. The minions at his beck and call make sure he gets one and we watch as he dry shaves his precious face to… perfection? Now he can give the crowd what they want. At one point he allows the fans to get close and embrace him. The moment says a lot about where his state of mind was at the time.

It’s things like this captured in a documentary like this that make you glad you ran across it. The reason for the doc being made, crucial moments in the relationship between Marianne and Cohen, are adequately covered and you sense how important he was to her, but you can’t miss witnessing moments that reveal who a person really is. One may prefer to bypass a self-centered artist’s inner nature to live as if he’s a God and just enjoy what they’ve created for us but it’s not always easy to do. Getting a peek into who they pretend to be and who they sincerely are is key and well established by the end of the film. Living in a monastery for six years may have humbled him some.
Marianne did eventually move on from Cohen and on her death bed, he sent her a letter. There’s a camera in the room allowing us a look at the fragile old woman, struggling to breathe, as it’s read to her. It’s warm and heartfelt. They’re the words she had always desired to hear. Something being on death’s door himself made him finally do. A smile lights up her face. She got the proof she had always wanted. She wasn’t wrong about how she felt. They were in love. They both struck the right chords but sadly, they just weren’t ever in tune. Marianne & Leonard died within three months of one another.