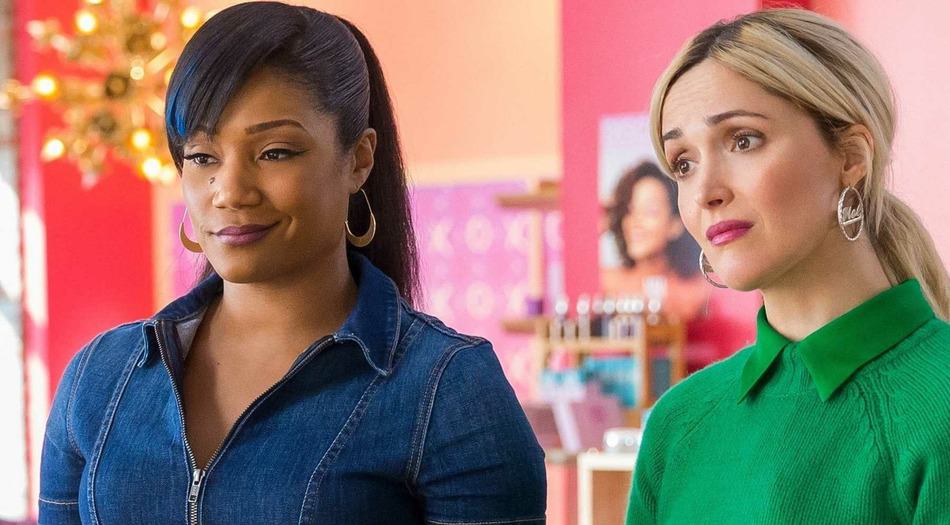 ‘Like A Boss’ is in desperate need of a makeover!

‘Like A Boss’ starts with Mia (Haddish) waking from a dream. In her robe, she walks up to her best friend since middle school, Mel (Byrne) to share the dream with her. Turns out, the dream was of the sexual nature and it involved President Obama. Mia explains to her friend, who she lives with, that she’s feeling conflicted and guilty over having such a dream because she respects Michelle Obama so much. Mel hopes she learned from the experience saying to her very animated friend that she shouldn’t have read Michelle’s book.

That’s silly, but a brave and spirited opening. I was hoping for more of this throughout the film, but we don’t always get what we want, do we?

With that introduction to Mia and Mel, we also learn that they’re also business partners. They own their own beauty company called Mia and Mel, which is fairly successful in their area, but small and with a lot of competition. They run the company by knowing that one of them is more competent than the other in one area of the business and they accept that. Mia is the creative one while Mel digs more into the commerce end of things. They both love their customers, their customers love them, but Mel doesn’t love how the books have been looking lately. Not wanting to affect her inspiration and imagination, she has kept the numbers from finding out how bad the numbers are but isn’t so sure she can continue to let her off that particular hook. Mia is so generous that all too often she gives goods and services away at cheap prices because she wants her customers to like her and to return. Where the film kicks in is Mel finally explaining to Mia that they’re in debt over 400,000 dollars. Surprisingly, Mia isn’t fazed by the news. Strange.

It’s suggested to them that they have their company evaluated. They do just that and end up mostly disagreeing about where things are financially. Mia sees that their future is bright, but Mel is more practical about the moment they’re in now. Quickly, it becomes evident and accepted that they’re in too deep to cope on their own. Before you know it, they’re becoming partners with the wealthy cosmetics giant named Claire Luna (Hayek). Little do they know; she isn’t actually interested in helping the women. She has an eye toward getting their signatures on a piece of paper that allows her to steal Mia and Mel’s.

That’s the basic gist of the story. Overall, it has its moments of whimsey. Haddish is funny practically every time she speaks but the part didn’t seem to fit her style. Everyone was great but you can see that they’re doing their best with a script that just doesn’t hit the mark. If you love these actors, is it worth seeing this weekend at an expensive theater or not? To that I say this; though some of you may not appreciate old jokes reprocessed over and over, some of you might. Not everyone has seen practically every movie ever made like I have so you don’t have anything to compare it to. The pacing, the design, the characters and the dialogue could be fresh to you. That said, I still have to answer with a no. It’s surprising that a studio would have a script (that needs a lot of work), manage to get this cast together and come up with what you see here. How could all of this talent and creativity come off looking so simple-minded and foolish in their characters? Sadly, the film also has women shoved into only a few categories; dummy or snake being the biggest. If I were you, I’d wait for cable to catch this one. It’s not worth the price of admission for the few sight gags and juvenile jokes that come because, too often in-between them, the film leaves you rather bored.