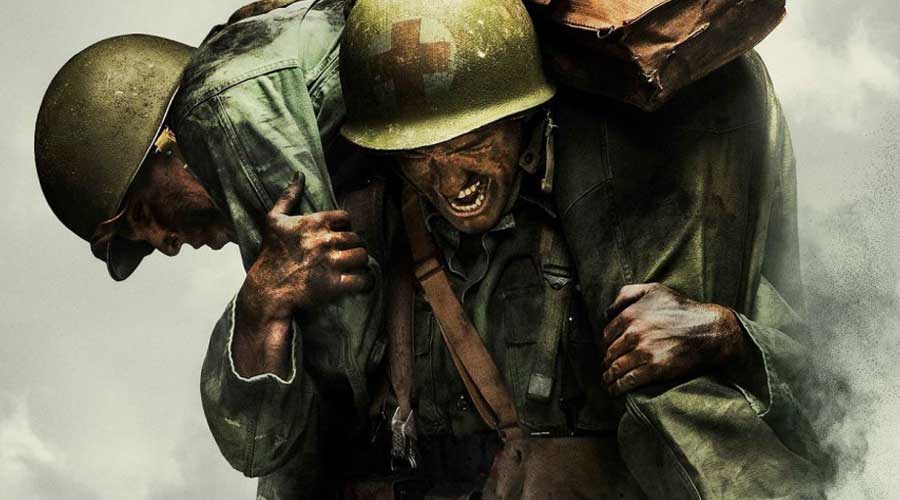 War is Hell, as it is said, but a movie about War can go many different ways. “Hacksaw Ridge” plays up the unusual angle of a World War II conscientious objector who was the first one to win the Congressional Medal of Honor. He refused to carry a weapon on the battlefield, and instead carried 75 wounded men to safety on Okinawa.

Desmond Doss (Andrew Garfield) grows up in a backwoods area in Virginia. He was raised by his strict alcoholic father (Hugo Weaving) and loving mother (Rachel Griffiths). When his brother goes off to WWII, Desmond also decides to enlist. His new girlfriend Dorothy (Teresa Palmer) is surprised, because Doss is such a gentle soul. 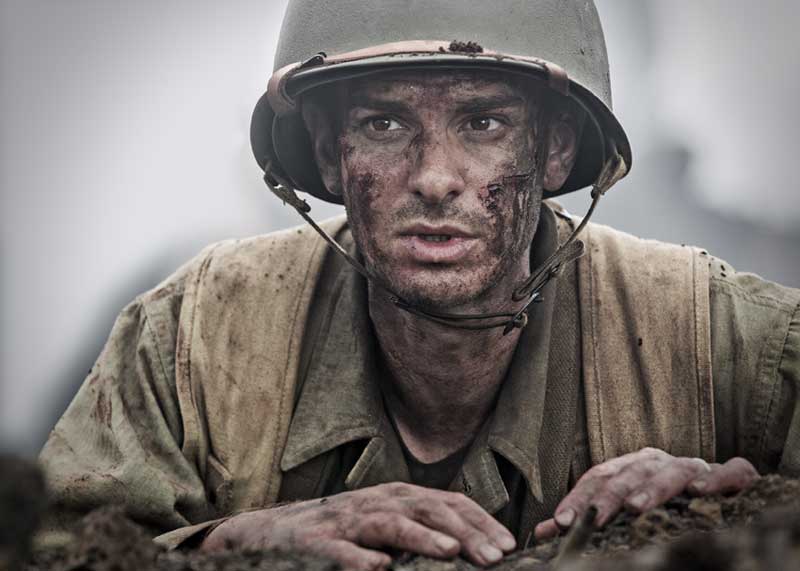 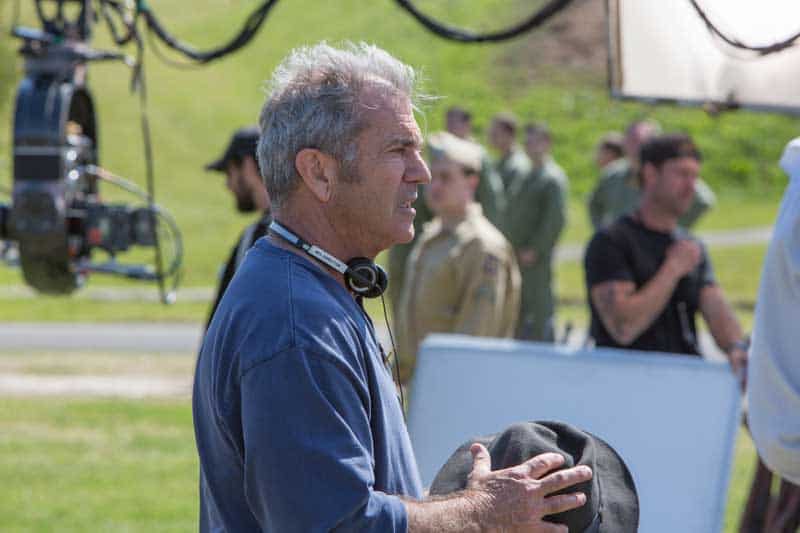 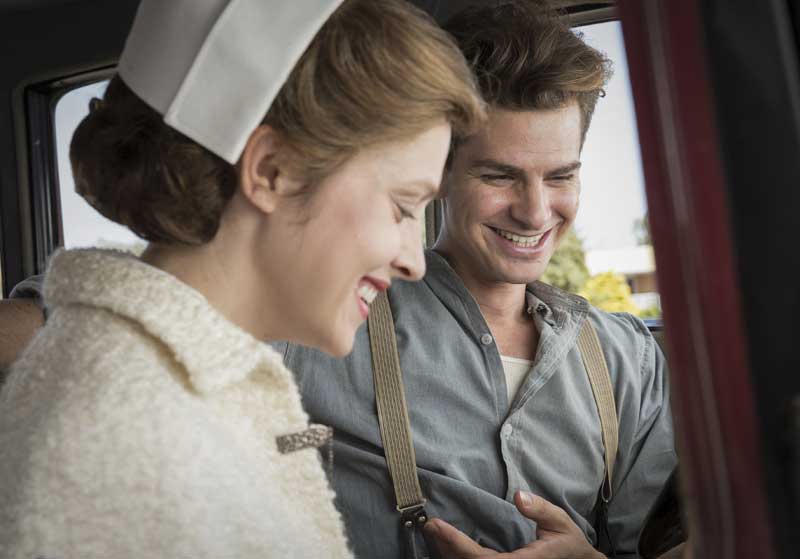 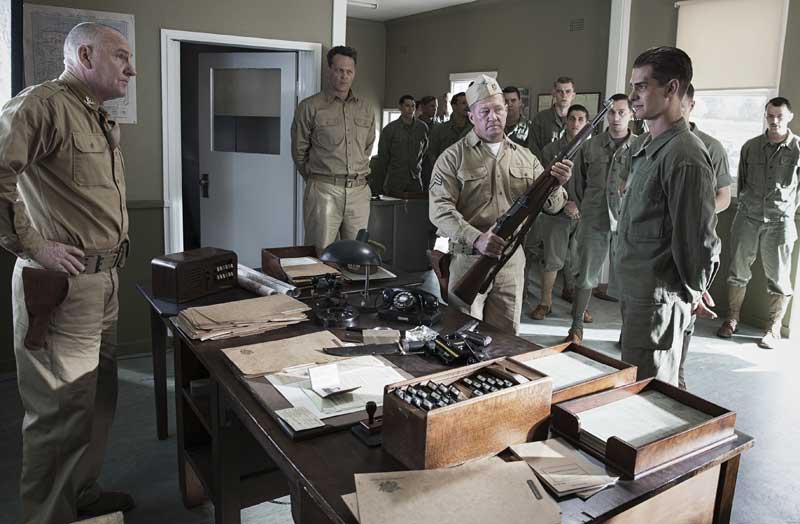 Doss proclaims status as conscientious objector is valid in the Army. But it does not sit well with his superiors, Sergeant Howell (Vince Vaughn) and Captain Glover (Sam Worthington).  They try every way possible to make Doss uncomfortable so he will leave on his own. The base commander orders Doss to pick up a rifle. When he refuses, Doss is threatened with court marshal.

Doss misses the leave from the base when he was to be married to Dorothy. Desmond’s father pulls some old favors from a World War I buddy. Desmond Doss is set free again to become a medic for the unit.

As the war winds down in Europe, the savage battle rages on in Japanese waters. On Okinawa, the unit is sent to perform an impossible mission: take Hacksaw Ridge. The long climb up rope ladders deposits the troops in a barren field of death. Other units have tried to take the Ridge, and many have died fighting the Japanese.

The fierce battle starts death coming from every direction. There are tunnels and bunkers and heavy weapons that the Japs are bringing down on the troops. Doss and his unit are slogging and fighting on, at the cost of many dead and wounded.  The Japanese retreat into hiding, getting ready to come in full force again.

Doss remains in the field, up on top of the Ridge. He hears a weak cry and goes to help a soldier. And then there is another, and another. He devises a way to lower the wounded down the side of the cliff, so he can stay and care for more wounded. Doss becomes the only one able save some of the solders. He helps Sergeant Howell among others.

Captain Glover is shocked to see so many of his men in the field hospital the next day. He finds out that Desmond Doss treated and carried out each of the 75 men. Doss and the rest of the troops are ordered to take the Ridge again. But this time, all the men are ready to reach the goal, knowing that Doss had the courage to stay up on the Ridge all night and save so many.

Andrew Garfield does a marvelous job with the difficult role of Doss. He plays a man of principles who is put down for his beliefs, but who is so strong in his conviction that he makes up for the fact that he will not fight. In a bloody and gruesome situation, Doss continued to find a way to save his fellow solders.

Every other actor does a really good job with the roles that they portray. But a special nod must go to Vince Vaughn, because in this role he is stretching his acting ability to new level. He plays a drill sergeant with a slight sarcastic streak. He is nowhere as good as R Lee Ermey in “Full Metal Jacket”, who was the real deal.

Mel Gibson is the director, and he is making his way back to place of respectability in Hollywood. Gibson might be criticized for the level of violence and gore in this movie. But it is a War movie, of course, so there will have to be something that will be bloody. The first part of the movie is almost a fantasy of small town and rural life, so the next part with the blood and guts does come as a shock.

The true life story of Desmond Doss is worth telling, and this movie tells the story well. It dips into a section of extreme war time violence that is disturbing. But Doss made the choice not to fight, he made the choice to help save. He was recognized and rewarded for his efforts.