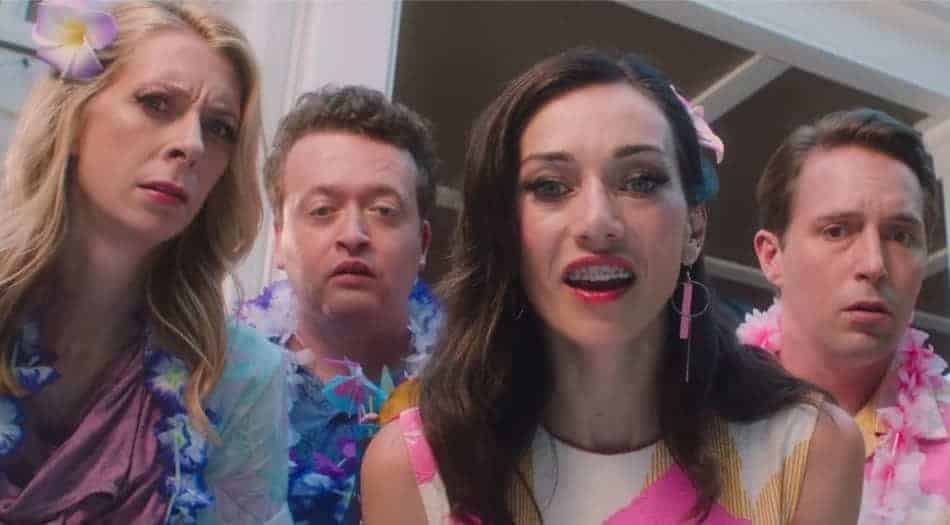 This film begins with what can only be described as, one poor mother’s monumental mistake. Jill (DeBoer) offers her friend Lisa (Luebbe) her infant daughter when Lisa admires the little girl. Though surprised by the gesture, Lisa accepts and takes young Madison home.

The handing over of the child happens before the credits roll. As they roll, we zoom in on Jill’s face and land on her tense but impeccable smile as it gets more jittery from the strain it’s now under.

These women live in a world where no one wants to be seen as imperfect or unkind. They are always in the ultimate battle of ‘one-upmanship,’ constantly trying to prove they are superior to the other. I’m not speaking of just Jill and Lisa; this is everyone. All adults are well dressed, well-mannered, and even have braces on their teeth. The braces are, most likely, worn to give them the feeling of control because they have none anywhere else, not to mention, they must have a flawless smile!

As with the child, all of the generosity and altruism are what make this movie. It’s crazy fun to watch Jill (the supreme Stepford Wife), as sweet as she is, begin to buckle under the strain.

As the movie continues, her anxiety increases. Another reason for this is that Jill and Lisa also have sons who they use to compare one another’s worth. Julian, who has a weak bladder and mind, is Jill’s son, and Bob, who’s quite possibly Satan himself, belongs to Lisa. Of course, the women are soccer moms, so how the children conduct themselves on the soccer field or anywhere else for that matter, is of great significance. Eventually, an extremely bizarre ‘Air Bud’ type situation arises. I’ll let you discover that on your own.

All of this and I have yet to even mention the husbands! Beck Bennett, actor, and writer who’s currently on ‘Saturday Night Live plays Jill’s docile husband and Neil Casey, also known for his comedic writing and acting, plays Lisa’s submissive husband. Their characters are slightly underdeveloped but are necessary to carry the story forward. When they’re no longer needed, they’re simply discarded. Well, in this dimension, all men are.

An odd  and mysterious killer is afoot, as well. When the women find out who was stalked and killed, they’re not as much sorry for the girl as curious and upset that they weren’t special enough to have been chosen as the victim. It’s this type of humor that keeps you watching. There’s a lot of poking fun at what women do to feel better about themselves. The entire film is absurd, which makes sense since the directors and stars, Jocelyn DeBoer and Dawn Luebbe, are a part of the Upright Citizens Brigade Theatre that teaches improv and sketch comedy. In fact, the entire movie feels like one long SNL episode. As often happens when I watch that show, I love most of it but feel as if sections don’t fit or go too far. While the killer in ‘Greener Grass’ lends to a few funny moments, it should have been left out.

I also believe that at the very end of the film, the award-winning writing and directing team of DeBoer and Luebbe miss an opportunity for Jill to get a momentous win… or at least announce that she did. All the same, I still enjoyed the film and believe that Jocelyn DeBoer and Dawn Luebbe produced a pure comedy for you to watch. If you love the illogical, this one’s for you.