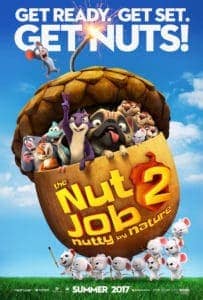 THE NUT JOB 2: NUTTY BY NATURE

Surly Squirrel (Will Arnett) and the gang are back.  We are once again in Oakton where the evil mayor has decided to bulldoze Liberty Park and build a dangerous amusement park in its place.  Surly and his ragtag group of animal friends band together to save their home, defeat the mayor, and take back the park.