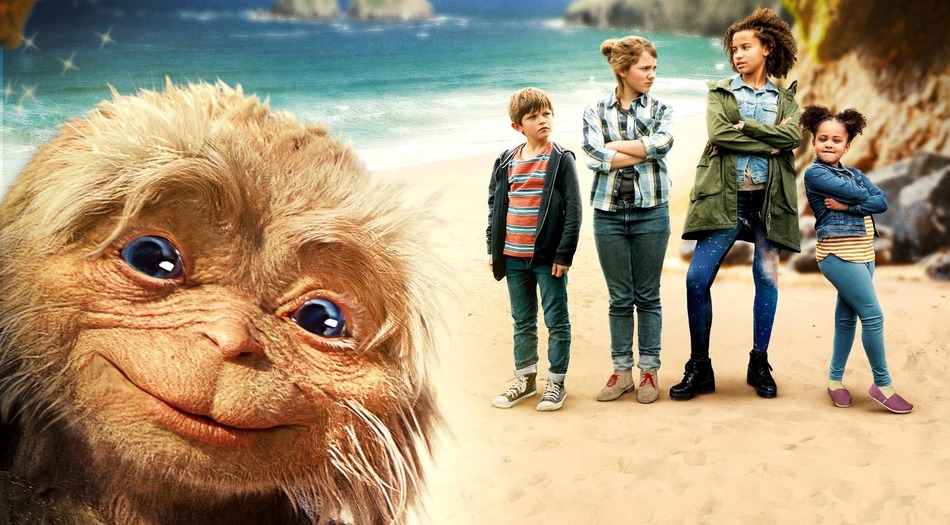 This film is based on the iconic children’s author Jaqueline Wilson’s book, ‘Four Kids and It.’ That being the case, the story is a spin on English author, E. Nesbit’s book called, ‘Five Children and It.’ Nesbit wrote or helped write over sixty children’s books in the early 20th-century. Her book was originally published in 1902. It’s actually the first of a trilogy so maybe we’ll be getting two more of Nesbit’s gems produced for the screen. I guess we’ll see. The novel is referenced in the movie in a clever way. Without giving too much away, the tome is desired for certain instructions it ends up having, but it’s not necessarily available when deeply needed.

Over the summer holiday, we meet two divorced parents, Alice, played by Paula Patton (2 Guns, Traffik) and David played by Matthew Goode (Downton Abbey, The Crown), and their kids. The couple, who like one another very much, introduce the kids to one another and hope they’ll like one another, as well. However, they get the reaction they were praying wouldn’t happen. The last thing these kids want to do is have a be presented with a new parent to replace the one they’re losing and be forced into getting along with a new sibling, one they weren’t interested in having.

Alice has two girls, Smash (Ashley Aufderheide) and Maudie (Ellie-Mae Siame). Smash, the older of the two, hates England and is miserable no matter the circumstances, and wants to go live with her father. Little Maudie tries to get along. David has a young teenage daughter, as well, by the name of Ros (Teddie Malleson-Allen), who is trying to get her parents back together. He also has a young son named Robbie (Billy Jenkins). There are a few stereotypes playing out here that might not be appreciated.

Things aren’t looking good until the children decide to wander down to the beach together. The movie picks up life when a little wish-granting creature under the sand makes its way toward Maudie. It pops out of the sand and introduces itself as Psammead, voiced by Michael Caine (Dirty Rotten Scoundrels, The Dark Knight, Inception), who will grant them one a wish a day. The wishes come with restrictions, of course, something the youngsters don’t learn at first until it’s too late. By the way, that information is held in the book I told you about earlier.

This story is magical, perhaps more entertaining for the youngest in the family. Psammead is adorable and who wouldn’t want a sweet troll to talk to, play with, and take advantage of?! We also meet another character named Tristan Trent, played by Russell Brand of ‘Arthur’ and ‘Forgetting Sarah Marshall,’ who plays the movie’s villain. He wants his wishes granted and will stop at nothing to make sure he gets what he wants. Does he learn his lesson in the end? That’s the question.

On June 30th, Four Kids and It will be available on Digital, Blu-ray, DVD, and On Demand, including major digital platforms including iTunes, Amazon Prime, Vudu, and others.

Four Kids and It