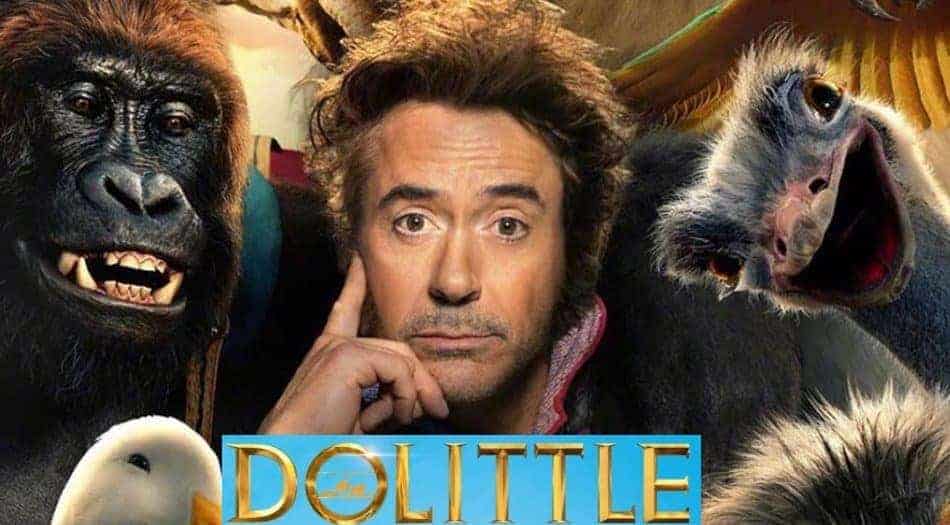 “Dolittle” is a ridiculously goofy romp into family-friendly fun and frolic. It takes an established character, Dr. John Dolittle, who has been explored in many books and other movies – and gives him a new and updated spin.  The main man has been played by Rex Harrison and Eddie Murphy in the past. So now a new actor has been selected to portray the Doctor who can ‘talk to the animals, just imagine it’. This actor has been known for being a major key part of a few other movie franchises. “The Avengers” and “Sherlock Holmes” come to mind. Can this person bring new life to a beloved character that is a bit eccentric and needs to go out on grand adventures? Yes, it is quite clear that this can become a new franchise…

Dr. John Dolittle (Robert Downey Jr.) is introduced as a fine animal doctor with an unusual skill – he can talk to animals. He understands them, and they understand the Doctor. He charmed the Queen, so she gave him a large country estate where he could hold all of his beastly friends. But his wife Lily went out on a dangerous voyage and was lost to him forever. Now the sad little Dolittle does just that – he does little. He is cooped up in with only his animal friends for company. He has a macaw parrot named Poly (Emma Thompson), and a nervous gorilla named Chee-Chee (Rami Malek). His other animal friends are Dab-Dab (Octavia Spencer) who is a duck with an atifical leg, Plimpton (Kumail Nanjiani) an ostrich who likes to hide, and Yoshi (John Cena) a polar bear that hates the cold.

Situations change when Lady Rose (Carmel Laniado) shows up to fetch the Doctor so he can treat the Queen. Her Highness has taken ill, and if she dies, the Dolittle Manor will be lost, and all the animals displaced. Also, Tommy Stubbins (Harry Collett) shows up with an injuered squirrel named Kevin (Craig Robinson). Dr. Dolittle is taken aback by all the activity – so he fixes the little squirrel and goes to the Palace to treat the Queen. He learns that there are sneaky things afoot with Lord Thomas Badgley (Jim Broadbent) and his medical henchman Dr. Blair Müdfly (Michael Sheen). They have poisoned the Queen, and the only known cure is an adventure away.

Dolittle leaves behind his trusty dog Jip (Tom Holland) to keep an eye on things. Lady Rose will stay with the Queen to tend to Her Majesty. Dolittle brings all of his other animal friends, and he brings also the boy Stubbins. They are out to find a magical cure that only a few people know of. His wife Lily was the last person to attempt this trip, and she never returned. But first, the Dolittle ship must sail to the island where Lily’s father lives. Rassouli (Antonio Banderas) is the King of a pirate island, and he holds Lily’s diary. Rassouli hates Dolittle for taking his daughter, and she is now gone forever.  Dolittle and Rassouli come to terms, but only after Rassouli tries to feed Dolittle to a huge tiger named Barry (Ralph Fiennes). Dolittle also gets some help from a James (Jason Mantzoukas), a wisecracking dragonfly.

The quest for a special ‘Eden Tree’ on a distant island kicks into gear once more. Dr. Müdfly, who is somehow in charge of one of Her Royal Navy’s warships, has followed along and now will get to the island first. But Dolittle and his talkative group of animal buddies are off to the adventure zone to get the Queen’s cure. They find new fabulous things, and Dolittle is ready to lead the way. They must defeat Dr. Müdfly and convince and ailing dragon that armor is bad for the digestion. But can Dr. Dolittle and his entourage make the discover in time? Will they be able to prevent the evil plans of Lord Badgley and Dr. Müdfly? Will the Box Office returns justify a repeat adventure with The Good Doctor?

“Dolittle” is a low-risk family-based romp that does not press your intelligence button too hard. It is light and bright and breezy. The people involved take the simple story and make The Good Doctor into a franchise-ready main character who will warm his way into your hearts. At least, that seems to be the plan. Putting a new spin on an old character is a typical Hollywood method to revamp a character and give an A-List star a new franchise to play with. And it looks like they could be successful in getting good enough results for “Dolittle” and Robert Downey Jr. in that role – this could turn into a long-term money-maker. Downey Jr. is charming in this role, and he injects some life into an old character. The supporting cast is very good. Michael Sheen and Antonio Banderas had a blast attempting to ‘out-villain’ each other. All the actors doing the animal voices do a decent job.

Robert Downey Jr. might need something to do now that his Marvel time has ended. Perhaps he will be satisfied to “Dolittle”…