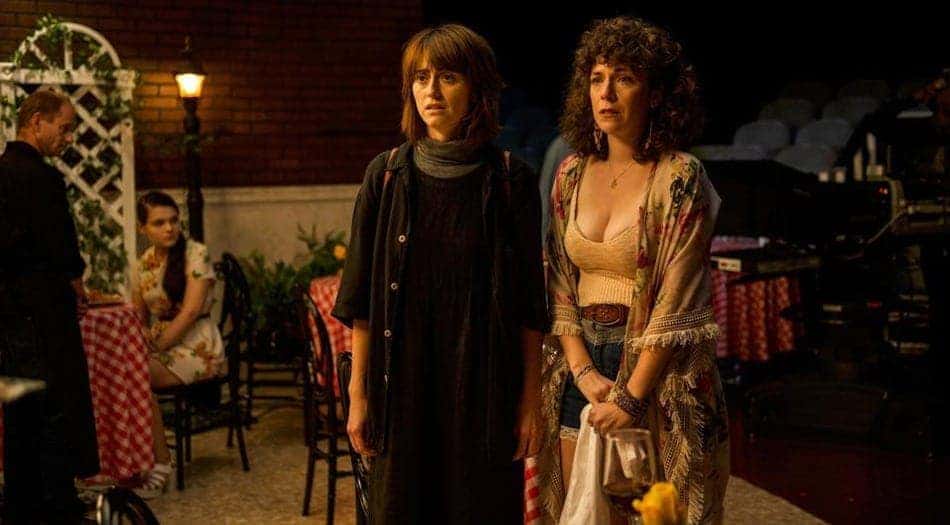 From the opening credits, which were plain white letters on a black background, to several shots of a character on the park bench from his movie ‘Manhattan,’ Hannah Pearl Utt’s, ‘Before You Know It’ felt very Woody Allenesque. ​
The locations chosen, the seldom-used, eccentric but necessary characters, (especially the mother) were all critical components in carrying out their goal if that was the plan. This feeling is what I liked so much about the movie. It was an ode to his style, but it went places that Allen himself could never venture with authority.
With regards to the female herself Utt, along with fellow writer and co-star, Jen Tullock, run headfirst in detailing what it’s like becoming a woman through its youngest character, Dodge (Yaffe). We learn what it’s like losing and also gaining one’s identity through the rest of this movies female cast. Utt casts Tullock and herself in the lead roles to make sure that the power of their message was delivered precisely as they had intended. This was done expertly, and these artists don’t miss the mark.

Though somewhat slow to get going, once it does, you’ll find yourself entrenched in the lives of these women, wanting the best for them. This may be the case but watching them go through mishaps and misfortunes is an integral part of the strength of the story. They win and they lose, but they learn from every step they take. Born and raised in their father’s theatre, Jackie (Tullock) who’s the actress and Rachel (Utt), the writer and stage manager, have been somewhat sheltered. They find out that the mother they thought long dead, turns up not only still alive but to be a famous and wealthy soap opera actress, played superbly by Judith Light. Her character, Sherrell, is very well developed. Watching Light perform their words and with Utt’s direction leaves me hoping they unite in the future.

The role yields a situation where Rachel and Jackie, having lost her so young, are injured and now able to work through their abandonment issues with the actual cause of those issues. As this yarn rolls forward, we watch as Jackie misses something important. That is how she has all but done the same to her incredibly intelligent daughter, Dodge. Young but independent and energetic, Dodge doesn’t hold back how she feels.
The film is silly with fear, angst, and doubt but shows us that all can be handled by facing the unknown and believing in yourself. Rachel seems only to want to reach her mother by keeping the family dreams alive. Jackie wants to feel comforted. For her to get that, she has to be surrounded by her family. Jackie fears losing everything, especially Rachel, but to keep Rachel, she must let her go.

All of the performances in the film are first-class. Though Mandy Patinkin is only in a few scenes; he was used so wisely that his presence is felt throughout. As I previously mentioned, Judith Light is necessarily and inescapably over the top, and Alec Baldwin very memorable.
For character study, see this movie. It comes at a time when we’re all a little tired of more of the same and ‘Before You Know It’ is anything but.

*Opening in Phoenix area at Harkins Shea 14 and in Sedona at the Mary D. Fisher Theater

Before You Know It