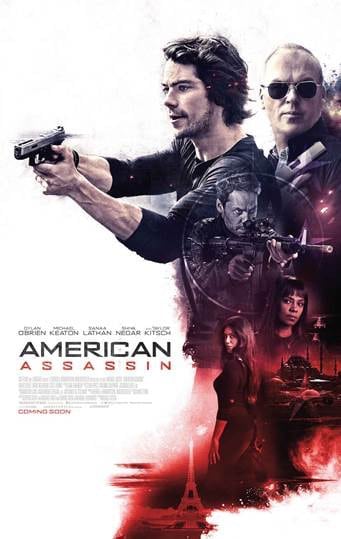 American Assassin is kind of your typical spy thriller in that it has a very Jack Reacher or Jack Ryan or whoever has the name Jack and is a detective of some sort these days, feel to it with one very big exception; those guys don’t have Michael Keaton walking around in their movie.  Keaton gives every performance a little something special and this is no different.  Mitch Rapp, the hero in the book series by Vince Flynn, and what will no doubt be a successful movie franchise now, does have Keaton.

Mitch has the drive, strength and the determination to get his immediate goals accomplished, even sometimes acting before he thinks.  What I like about the characters is that he is rarely ever wrong and his mentor and guru, Stan Hurley (Keaton), has to bang his head against the walls to try and pound sense and procedure into him.  However, Mitch runs on adrenaline and something else… the sense of what is right and wrong.  Love drove him to be a vigilante and is what, ultimately, led him to Hurley, a retired SEAL.  Hurley’s now training a Black Ops mission led by Irene (Lathan) of the CIA.  Hurley knew and worked with Irene’s dad and though he doesn’t trust her instinct on young Mitch, he agrees to train him and see if he’s what they need for their counterterrorism operation.

Irene first stumbled onto Mitch while following his digital footprint.  At the beginning of the film, Mitch (O’Brien) was proposing to his girlfriend on the beach when terrorists struck the area and started shooting everyone in sight.  Mitch was struck several times but not fatally.  While passing out from his wounds, his beautiful fiance’ lies dying beside him.  After, he is determined to bring down every terror cell he can.  He learns Arabic and studies their history and ideology.  He learns to fight, practices martial arts and masters weaponry.  He grows a beard and becomes a one-man killing machine out for revenge.  Everything you could want in a good guy and your new spy.

On his own and without the help of anyone, Mitch gets close to a terrorist cell but is captured.  He’s saved at the last minute by the CIA.  When they tell him how stupid, naïve and dangerous his scheme was and tells him he was lucky to have been rescued, he reminds them of the fact that they followed him in, not the other way around.  However, what remains a recurring theme in the film is a question, ‘is Mitch too driven by emotion to be any good to a team?’  A big lesson Hurley needs to get through to him is to never let it get personal… it clouds the judgment.  The scenes where Mitch is being trained are difficult but he takes his licks and remembers his training.  These scenes are entertaining and imaginative but in thinking of the training the actors had to go through to get all the training and fighting scenes shot, I couldn’t help but wince some watching it.

Before long, Hurley decides Mitch is their guy and they go out on a mission to recover stolen plutonium.  Iranian operatives intend on making a nuclear weapon and must be stopped.  There are other characters introduced and some character driven subplots come and go, which all work in the film’s favor, especially when it comes to the most important one of all, Ghost (Kitsch).  He is a former student of Hurley’s with a chip on his shoulder.  He has different plans for the bomb once the trigger and a physicist is found to make it complete.  His plans are to get back at Hurley and the country that let him down.  Taylor Kitsch does a good job in a scene having fun torturing his old guru.  He may have had too much fun with it, in fact.  Dylan O’Brien, almost a Taylor Kitsch look alike, is terrific in this film, both looking the part and handling the script.  He’ll make a very admirable spy movie hero for both new and old fans of the genre, alike.

I liked American Assassin and I think you will, too.  Don’t take it too seriously; know you’re going to be captivated by this world for a while.  Just sit back and enjoy the show.  I did and I was in no way influenced by the audience I watched the screening of the movie with, which were a whole lot of Phoenix police officers who have read the series, love Mitch Rapp and are going to be there to support this film and any that follow.  I support it because it did one thing and that was, it entertained the hell out of me.  I am looking very forward to the next one.  This is a fresh perspective on an overly used but seemingly timeless subject and was appreciated.  It’ll be enjoyed by anyone who likes action thrillers and it’ll please them more by giving them a new hero to look up to.