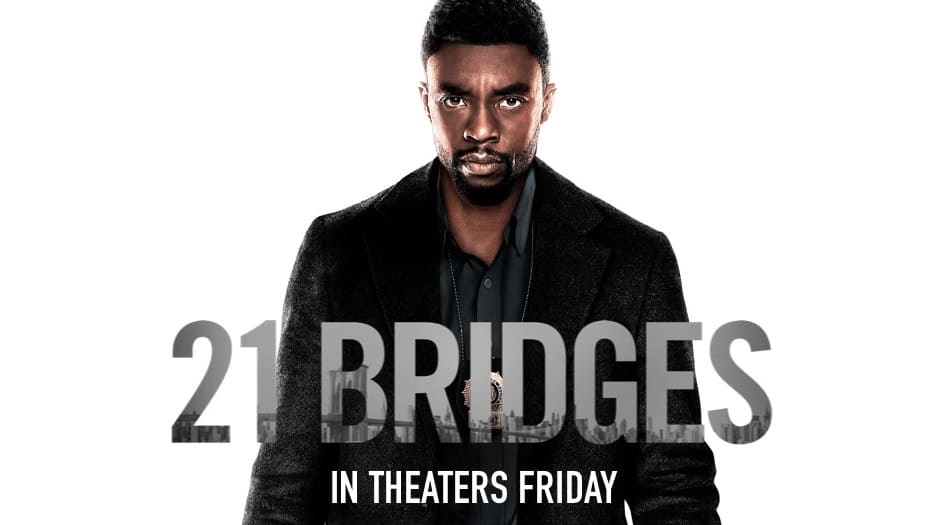 “21 Bridges” is tightly-paced police action drama, in which a couple bad guys kill a bunch of cops — and then Black Panther comes to the rescue…  Well – actually the actor who plays Black Panther. But for a standard ‘police face off against assailants’ type of movie, this does a really good job to keep it moving. There is a tragic starting event, and an arbitrary time limit imposed. The detective in charge needs to find and deal with the cop killers. And by ‘deal with’ – there are many in the NYPD who want the ‘deal with’ to actually mean ‘shoot to kill’. But if that happens, will the real truth come out?

NYPD Detective Andre Davis (Chadwick Boseman) is a good man, because he has his elderly mother living at his house. His father, who was also a cop, died many years ago in a gun battle. Davis has a reputation of confronting suspect cop killers, and many times they die at his hand. Always because they shot first – and he fired back. He was cleared every time by Internal Affairs, so he has a certain amount of credibility – and bad guys steer clear from him. But this night is going to be a long struggle for the police department.

In Brooklyn, a small restaurant is way beyond closing time. It is past midnight, when two heavily-armed guys come in the back way. They are ready to steal thirty kilos of coke – but when they find there are three hundred packages, they know something much bigger in happening. The one store employee knows that these who guys are in way over their heads. They grab about fifty bags and are ready to leave, but then the police show up. Did the employee trigger an alarm? Or are these cops coming there for another reason…

In minutes there are multiple dead cops and one in the hospital. The crooks, named Ray (Taylor Kitsch) and Michael (Stephan James) need some help from the guy who set up this robbery. A guy named Bush (Louis Cancelmi) was sure that there was only gonna be a much smaller number of kilos there. They are very pissed that they got set up with an overload of product that they cannot steal. Plus, the fact all those cops showed up at the same place. Their contact Bush takes them to a major dealer, who pays them a million bucks – in twenty-dollar bills. They complain that the weight is as heavy as the bags of cocaine.

But by now the police have turned up at the crime scene. Detective Davis get paired with a Narcotics cop named Frankie Burns (Sienna Miller). The man in charge of all the dead cops is Captain McKenna (J.K. Simmons), and he wants Davis and Burns to get the guys who did this – dead or alive… but not alive. Davis knows that the perps are still in Manhattan. So he gets the Mayor to shut down the island – and that means the city closes access to all of the 21 bridges in and out…

Michael and Ray are on the run with excessive amounts of (heavy) money, so they take it to a shady guy who can launder it into clean cash. Adi (Alexander Siddig) takes his own large cut – but he gets the two thugs some loose cash, an off-shore account, and a way to get out of the country. But before everything gets completed, a crew from McKenna’s division show up to take them all down. Adi gets Michael to take some secret information before they escape out the back way.

Michael and Ray get away – but before too long Davis and Burns catch up to them. Ray gets dealt with (in the ‘shoot to kill’ manner), and Michael takes Burns hostage. Davis and Michael talk about how something just seems wrong about this whole thing – and Michael again escapes. But now Davis gets the idea that there is a bigger picture right outside his frame of reference.

The time limit approaches to when the bridges will reopen. There is a chase to the subway, and Davis confronts Michael one last time. But again, he raises the idea that some secret information that he has will blow the doors wide open. But the daylight comes and the police rules that everything has been settled and the situation is all wrapped up. But is there still a loose end that Andre Davis will need to follow? And he does follow that final lead, will he like what he finds?

“21 Bridges” follows a pretty standard path to the normal cop drama formula. The level of effort of the acting does all that it can to rise about the cliché dialog (“We will flood the city with blue!”). Chadwick Boseman does a very good job as the Detective with a big puzzle to solve. J. K. Simmons is also good as a dubious fellow cop. And Sienna Miller gets in another good performance as the Narc with an itchy trigger finger. Stephan James, Taylor Kitsch and Louis Cancelmi are all fine as bad guys into something bigger than they understand. The scenes tend to pulse with energy and power when it shows the late-night New York City streets. There is a quick pulse to the story line, and it never seems to drag at all.