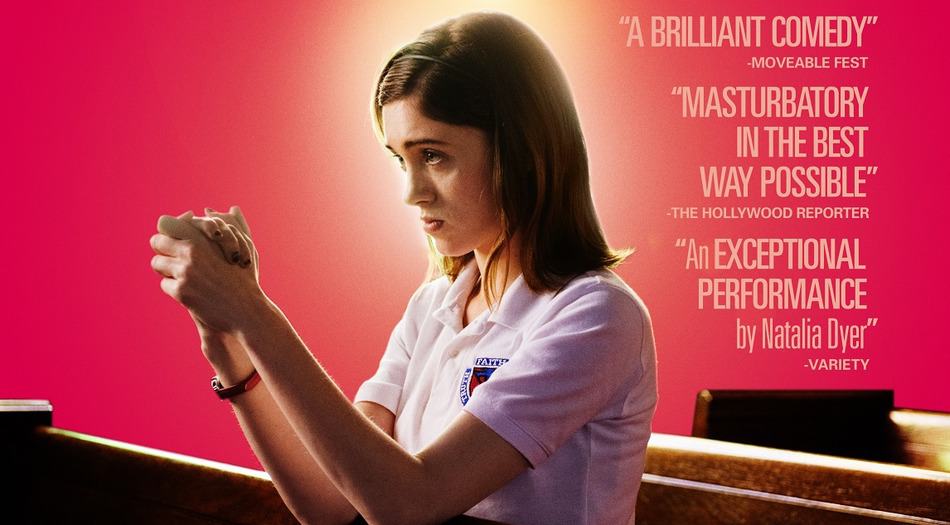 Ah, the four-day church retreat. Whether it was centered around Catholicism or not, they were inevitably opportunities to hang out with your friends. You were there to check up on how everyone was since the last time you saw them, hook up with someone again, or hook up with someone for the first time. I’ll never forget Vince, and here, it seems Alice (Dyer) will always remember her group leader, Chris (Wolfgang Novogratz). I felt that needed to be mentioned first to get you into the right frame of mind for what the theme is. It’s about the sexual awakening of its central character, Alice. She has always heard that natural urges and feelings, and masturbation, are against God’s wishes. Now that she’s older and is being overrun with those urges, she’s perplexed about that statement.

This film opens with passage 21:8 from Revelations that says, ‘As for the faithless and the sexually immoral – their portion will be in the lake that burns with fire and sulfur, which is the second death.’ Woah! That’s heavy for a youngster to carry around. After, we see the definition of ‘Tossed Salad’ as if used as a noun. Hmmm. I’m puzzled at this point and wonder if another description is about to pop– yep! There it is! Salad Tossing used as a verb. Something told me I would see it. Salad Tossing is the sex act involving the mouth and the buttocks. What exactly is this film about anyway?!? I thought I knew, but this was unexpected. The reason this word is being shuffled about is revealed through poor Alice, who is an unwitting participant in some cruel rumors going around. It is said that she’s an expert in Salad Tossing and that she had done this very thing with a classmate named Adam (John Henry Ward). It seems no one questions her guilt, not even the staff of the school or of the church retreat she goes on soon after. I found the rumor to be the most disturbing part of the storyline. Even though it’s told in the early days of social media, think AOL dial-up, this type of slander most likely happens more often than you’d think. With all the other pressures of growing up, I can’t imagine dealing with that sort of thing as a teenager, as well.

Her complete naivete and purely innocent face don’t help Alice to be believed. While doing chores as punishment for some misdeeds, she has already found out that the people in charge are complete hypocrites. When she has had enough, she decides to act out and take a chance with Chris. At this point, why not? Being told that her lust is a sin, she’s now unsure of what to believe. She now questions everything she’s been taught.

Alice takes a walk away from the retreat to settle herself and winds up at a gay bar. There, she speaks to a wise old owl and is given some sage advice.

In the end, you see that Alice will do just fine when she returns to school. She grew considerably since we first met her. In fact, Alice is years beyond anyone else in the school. She takes a chance to show teach all of them that, especially the one who’s supposed to set the most significant example for the youngsters. This film, from first-time feature director Karen Maine, who also wrote the script, has a great message, which is easy to detect. So much so that maybe the story even takes you back to your youth, which helps you genuinely feel for Alice. Connecting to your audience is very needed if your movie is to be a success. Maines does this, seemingly, with ease. You’ll love Alice, and through her, you may remember a time when you were wide-eyed and pure. How long ago was that?