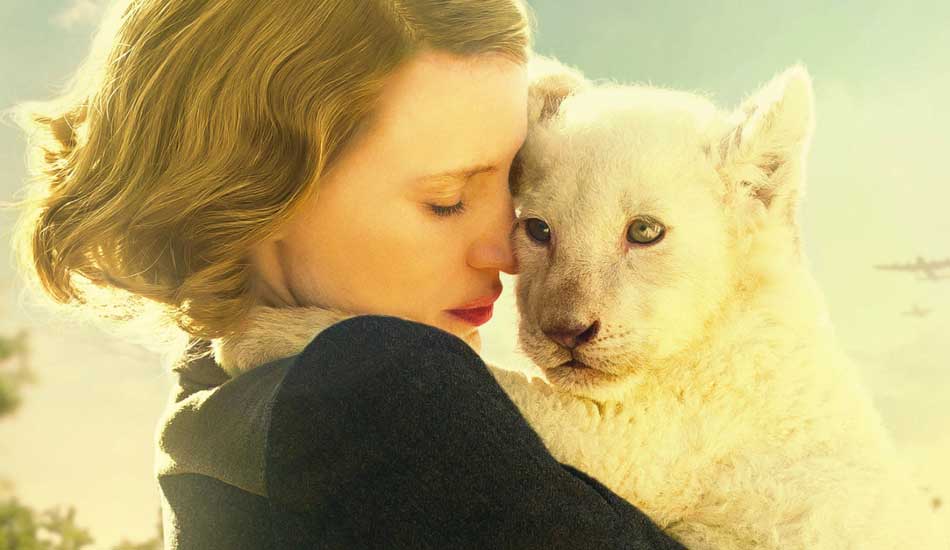 During World War II, many Jews were hidden and kept safe from the Nazis at great risk to the families that gave them sanctuary. Oskar Schindler did that in Poland. A family named Żabińska ran the Warsaw Zoo. They also did a humane thing by keeping a secret group of escaped Jews on their property. Perhaps you could say it was like: “We Bought Schindler’s Zoo”.

Antonina Żabińska (Jessica Chastain) is married to Jan Żabiński (Johan Heldenbergh) and they operate the Zoo with their young son. They have a distant relationship with a Berlin zoologist named Lutz Heck (Daniel Brühl). Heck run the Berlin Zoo and visits them on occasion. Up to 1938, the Zoo is very popular and always busy.

Then in 1939, Germany invades and takes over Poland. Much of the Zoo is destroyed, and the German troops bunker in the Zoo every day. The surviving animals are ordered to be shot, because they will no survive the winter.  Lutz Heck becomes an important Nazi official; after all, he is Hitler’s personal zoologist. 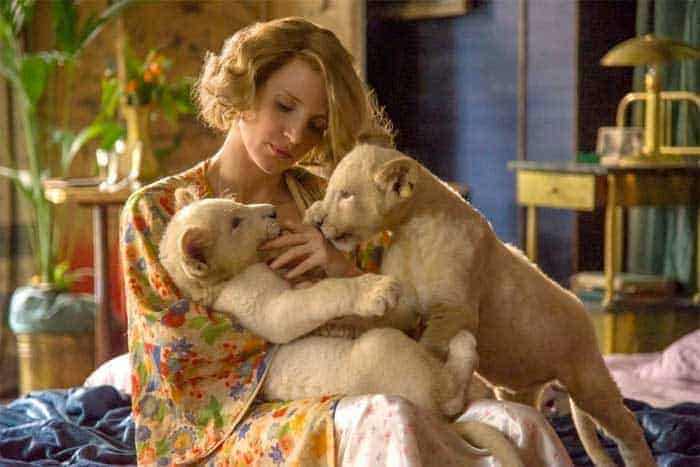 Antonina and Jan see that many of their Jewish friends are being forced into the Warsaw ghetto. Since they know Heck, they convince him that the Zoo can be converted to a pig farm, and what they raise will help feed the soldiers. They both have free access to move about the occupied city. They use that freedom to help more and more Jews escape from the ghetto. They stay hidden in underground animal cages under the Zoo.

Many years pass, and the situation stays bleak. Antonina must convince Heck to continue his visits and allows him to flirt with her. She will do anything to keep Heck distracted so he will not order a search of the entire grounds Many Jews stay for weeks and months, and a few for multiple years. When forged papers are created, they are whisked away to safe places.

Jan is hurt by Antonina and how she plays along with Heck. But he remains glued to the mission of saving people and fighting in the resistance. Not until 1945 do the Allied forces come to Warsaw and liberate the city. All this time, over 300 people had been hidden away and saved by Antonina & Jan Żabińska.

This is based on true events and it is beautiful story. Even in the danger and decay of Warsaw in the war, Antonina and Jan managed to keep up the spirits of everyone around. They faced certain death if they had ever been betrayed or if they were found out. They made a sanctuary for the ones who had been dejected and put aside as worthless. Instead of tending to animals, they were tending a human flock.

Jessica Chastain gives a very heartfelt performance in this movie. Johan Heldenbergh also does a good job, but his character is much more stoic and unemotional. Daniel Brühl almost borders on being a parody of a typical bad guy. The rest of the cast is convincing and does a nice job. Since so many years pas, the Żabińska son is played to two different child actors, which makes it a little distracting.

“The Zookeeper’s Wife” is a tale that does need to be told. The amount of courage and bravery shown makes for an interesting story. Perhaps some scenes could have been trimmed to make it a bit shorter. Of perhaps the passage of time could have been made a little clearer. But it is very uplifting movie about a dark period in our recent history.