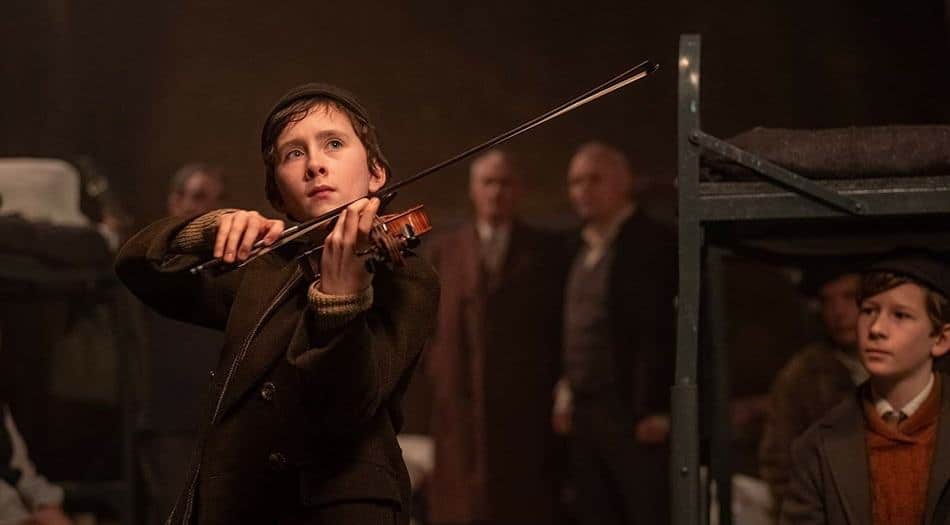 Based on the novel by Norman Lebrecht, ‘The Song of Names’ is very much the story of a budding rivalry that turns into friendship and mutual respect. Later, it develops into a love that can’t be buried by the absence of body or spirit because the spirit never dies, and as long as we have our memory and recordings, neither does music.

Director François Girard graciously brings us this story in a series of flashbacks that explain the opening scene where he leads us to believe the movie will go in one direction when it, in fact, spirals off into several others. This revelation could be a slight disappointment if you go in convinced it’ll delve deep into the life of a young virtuoso. We start in 1951 in London with a concert that never happens. Important and influential people are filling the seats to see Dovidl Rapaport, the violin prodigy who was being compared to Isaac Stern, play. He doesn’t show. Using flashbacks and flashforwards, we find out why. First, we go thirty-five years into the future.

We’re introduced to Polish immigrant, Dovidl when he is invited to live with a British family in the days leading up to the Germans attacking London. The family takes him in, happy to do so as they have a young boy, Martin, the same age.

At first, mostly due to Martin’s jealousy, they don’t get along. This being the case, Martin is rather terrible to the young lad who just lost his family. However, when they get to know one another, they become as close as blood brothers. Being great admirers of music, Martin plays piano and Dovidl the violin, they eventually bond and have a healthy relationship.

In its non-linear structure, we first meet Martin (Roth) as an adult. When we do, he’s judging a music competition. The last contestant, Peter Stemp (Max Macmillan), steps onto the stage to play. Interestingly, not only does Peter perform as Martin recalls Dovidl playing, he has the same techniques, mannerisms, and rituals, if you will. Here, François Girard makes the point that the world shouldn’t be deprived of the beauty as that which comes from Dovidl’s instrument when its stings and bow meet the bridge.

Martin wonders to himself, ‘how does someone else play precisely as my friend and brother?’ A mystery will now unfold. Peter shows Martin where he learned, which leads to another mystery to be solved.

Martin speaks to several people, and, through a beggar, he meets a mystery man. That man tells Martin that his teacher said he was, ‘Going home to play with the ashes.’ That teacher was Dovidl. Will Martin get what he’s looking for?

Through an exhaustive search of Europe, Martin runs down his old friend’s instrument. All of this running around is a tedious process, and the layers of timelines that it takes to get you to this point is sometimes bewildering. There’s gorgeous music in this film, the score is by Howard Shore, so that’s a given, but perhaps the leap from script to screen isn’t justified if you barely touch upon an essential element of the story and of the time. That element being the reason Dovidl was in Martin’s home in the first place. The Holocaust.

That tragedy takes us to how Dovidl finds out about the song the title speaks of, yet it could have been depicted so much better. This moment, arguably the best of the movie, is moving, powerful, and meaningful. Getting here is the reason the film was made, yet it falls flat in the throes of mediocrity and misses the mark the author had intended for the audience to reach — such a shame. I won’t tell you what the song is about. A hint is that it’s an ode to those lost in war, whether fighting the battle or not. But see this for yourself today. Maybe you’ll have a different take. It’s good; it’s just that it could have been so much more.

The Song of Names