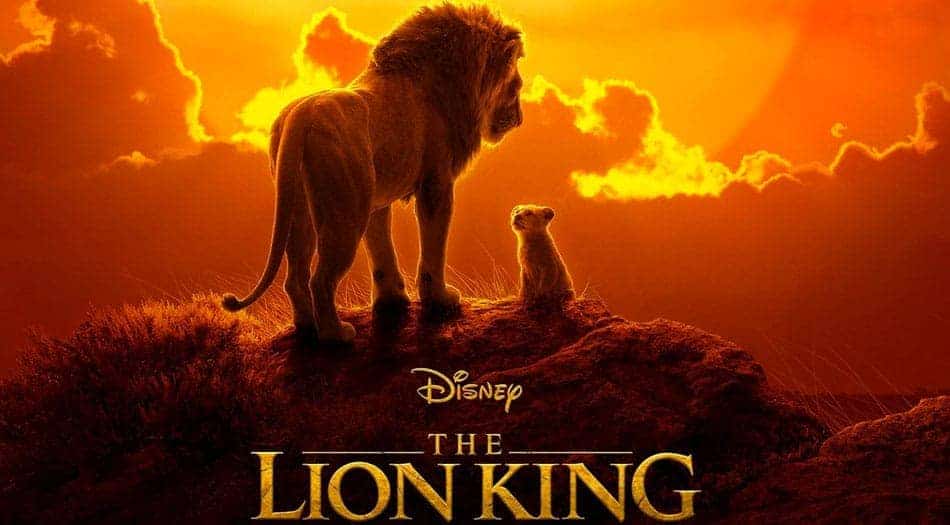 “The Lion King” – the first movie was original and very enjoyable, and now this one is enjoyable – but not all that original…

The Disney formula used to be “Wonder, Joy and Amazement”, but it has turned into “Wash, Rinse and Repeat”. Looking back at a classic Disney animation movie such as this, it is difficult to come up things that would need to be changed to improve on the original. That is exactly the problem that they had when creating this movie – there is so much that is the same old, same old. The story did not need improvement. The music score and songs did not need to be improved. Some of the casting for the new version gets away from the minor mistakes of the first one. After all, a proud lion of the African savanna should have a voice other than the uber-pale Matthew Broderick.

In case you have been living under a Pride Rock for the last 25 years:

On the African plain a group of lions leads the various animals that live in the Pridelands. The leader is Mufasa (voiced by James Earl Jones) who is a wise and good leader. His mate is Sarabi (voiced by Alfre Woodard) and they have a brand new (and extremely cute) cub named Simba (voiced by JD McCrary, then later by Donald Glover).  Simba’s small lioness friend is named Nala (voiced by Shahadi Wright Joseph, and then as the older Nala – by Beyonce Knowles-Carter) Nala and Simba like to get into mischief, but usually they are held in check under the watchful wings of the tribal ‘majordomo’ – a hornbill named Zazu (John Oliver). Also in the mix is a wise and ancient baboon named Rafiki (John Kani). And then there is Scar…

Scar (Chiwetel Ejiofor) is Mufasa’s brother – who would kill for the crown. In fact, he does. But since Simba is in the way, he figures out a way to end Mufasa’s reign. He also gets lot of help from his allies, some evil hyenas (Florence Kasumba, Eric Andre, and Keegan-Michael Key) who want Scar to allow them to plunder the Pridelands. After a tragic incident, Scar convinces Simba that he is to blame for his father’s death. Simba runs far away, and he does not stop until he collapses. He is saved by an unlikely pair out beyond the Pridelands. There is a little meerkat Timon (Billy Eichner) and his lovable buddy warthog Pumbaa (Seth Rogen). They have “no worries, for the rest of their days” based on their “trouble-free – philosophy”. Something about “Hakuna Matata”…

Any of this sound familiar? Unless you are one of the 74 people on Earth who have not seen the original “Lion King”, then you should know the rest. The characters, the story lines, and songs and the background score has stayed pretty much the same. A few of the voices are little bit better in reflecting the country where the story takes place. Having actual African-American actors fill those roles does feel like a plus. Once in a while there is a new song, or some changed lyrics, or some different dialog. The photorealistic images of the wild animals and the African vistas are a work of art, and the CGI is rendered with great care. But there is lot of the movie that is stuck on ‘Repeat’.

There is a major upside to the design and shot composition. The realistic renderings of these wild creatures is truly amazing. However, some changes do not translate as well as others. Chiwetel Ejiofor and Seth Rogan do not have great singing voices, and that hurts in couple of places. John Oliver is perfect for the obnoxious little Zazu (or is Oliver just perfectly obnoxious?). Seth Rogen and Billy Eichner have a great chemistry and Pumbaa and Timon. Donald Glover and Beyonce really shine in the singing category – but that is expected. Musuasa could not have a voice other than James Earl Jones. And the soundtrack with Zimmer’s music and the songs by Elton John and Tim Rice are just as enjoyable today…

So why not break out your VHS copy of “The Lion King” and enjoy it today. Because Disney wants to reformulate their old classic movies into something new. Even when there is nothing that really gets changed.  Will it give families a chance to go out and see the story of Simba come back alive to the big screen? Yes, and that is not a bad thing. It is not a needed thing or a required thing, just an OK thing.

So – “Be Prepared” to get some cash out and invest into Disney’s “Circle of Life” that recycles from the old to the new. “Can You Feel The Love Tonight”?

Based on: Disney’s “The Lion King” (1994) (by Irene Mecchi, Jonathan Roberts, Linda Woolverton)

MPAA Rating: PG for sequences of violence and peril, and some thematic elements