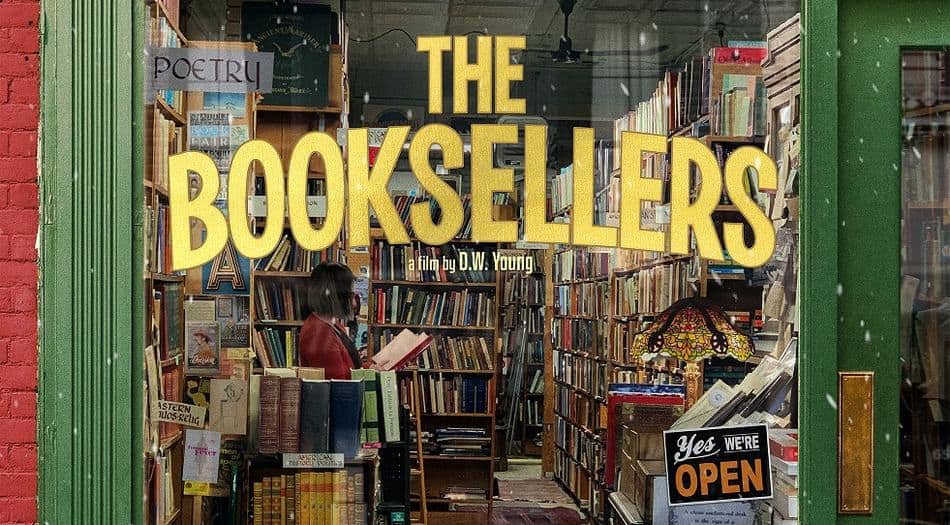 There’s one way to look at this film, and that is to say, it’s a documentary about books. You could say that, but it doesn’t quite capture what the essence of the film truly is. At the heart of it all, this is an exceptional documentary about the ‘book market’ or rather, ‘book world’ of New York.

Within the doc, Fran Lebowitz was careful to note that there is a big difference between the words’ market’ and ‘world.’ I’ll go with the more positive of the two because, as bleak as some may see it, I don’t think the love of books is going anywhere anytime fast. If you have or have ever had an interest in books and how others fell in love with them to the degree of dealing in books, you’ll be fascinated. It was hard not to be.

Here, rare book dealers are interviewed where they work, at home, and in beautiful, historical buildings such as the Park Avenue Armory, which used to be tennis courts, but now hosts the annual Antiquarian Book Fair. At the book fair, booksellers discuss the books they have for sale or may have seen in the building, such as a first edition Gutenberg Bible. It was initially bought for thousands and is now worth an estimated 40 million. We see a copy of William Shakespeare’s Third Folio, bought originally in 1897 by J.P. Morgan. Each book dealer has different tastes and has a deep love and devotion for what they’re selling or are there to purchase. It’s endearing the way they discuss their own passion pieces or what they may have held in their hand at one point, unable to acquire, but granted the permission to touch for what turns out to be a thrill of a lifetime.

The love of these books is so strong, Fran Lebowitz says she’s afraid even to touch books that fetch the big bucks. That she doesn’t have an extra 85,000 dollars to spend on a book, she also cites how she once saw a man set a drink on top of a book. She goes on to say that had he done something like that in her home, she would have ended him where he stood.

There is a fear that the printed word is going away. That to be a surviving bookseller at this day and age is relatively unthinkable. Afraid they won’t have anything to sell in the future, it’s mentioned by several booksellers that people who read now have the ability to download a book straight to their computer. They surmise that because mobile devices have shortened people’s attention span that they’ll most likely stop purchasing physical copies altogether. This is countered by someone saying that you can find a book that has been around for 500 years, but try finding the link to an article from a few years ago, and the goal isn’t always reached.

I’ve only mentioned a few of the appealing aspects of this film. The sellers, collectors, and the people who’ve admired the game are so exciting, you’ll be mesmerized by the stories they tell, the lives they lead, and how they live that you’ll be disappointed when the film ends. Showing us stores such as the Argosy and the Strand and old photos of how they were in their prime, along with beautiful illustrations throughout, make this an incredibly special documentary to explore. Watch this at home today.

*Because of the Coronavirus, this will be a Greenwich Entertainment’s virtual cinema release in coordination with movie theaters. In Arizona, check the Mary D. Fisher Theatre, scottsdalefilmfestival.com or The Loft Cinema websites to ‘buy a ticket,’ (a link) and watch this film at home.