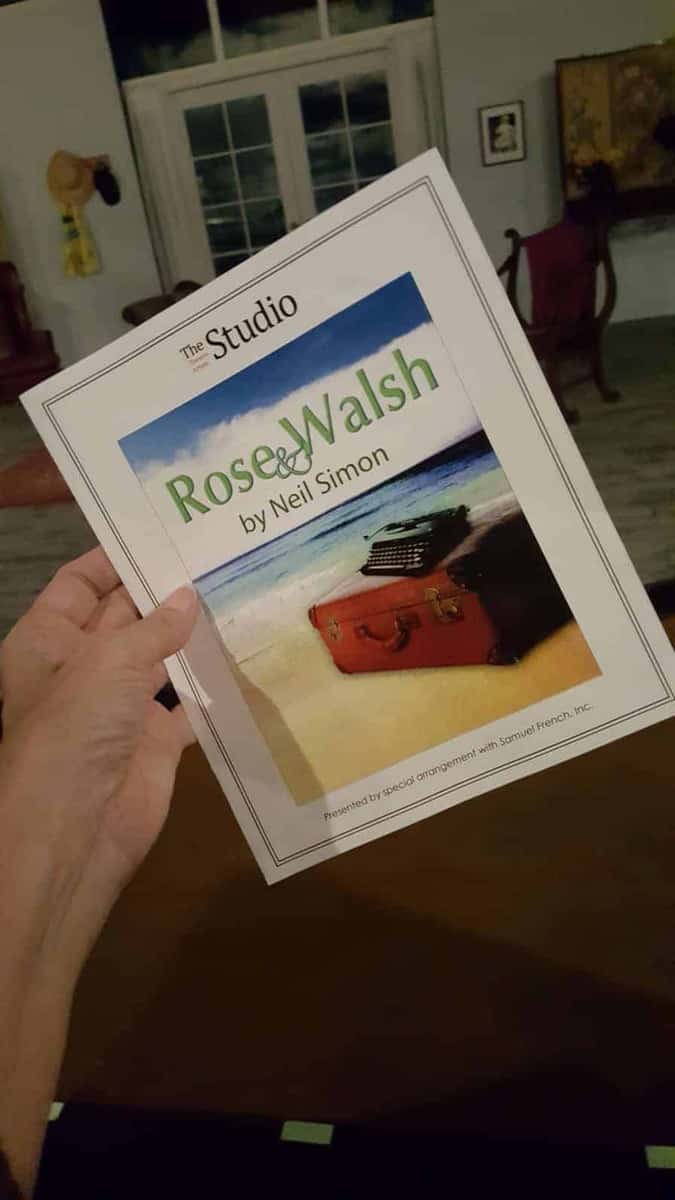 Phoenix! Don’t miss ‘Rose & Walsh,’ Neil Simon’s thirty-third play which closes this weekend on Sept. 2nd. I’ve never been to a live performance of a Neil Simon and the fact that he just passed away made the experience of this being my first that much better. He said of ‘Rose & Walsh’ that his play, ‘Follows two great literary figures and the depth and consequence of their enduring love.’ The literary minds are those of Rose Steiner and Walsh McLaren, a couple who were together in life and who are still together even though he has been deceased for five years.

Playing Rose and Walsh are Marney Austin and Tom Koelbel respectively. Marney, who hopped all over the globe performing, producing and directing, continued to do the same after returning to the U.S. She serves on the board of the Theater Artists Studio and was excited about the opportunity to play such a fun yet heartbreaking character. She’s impressive in her performance. While watching her you realize she’s energized the room. She’s so comfortable with her co-stars, especially when arguing that she’s right and they’re wrong. Switching from a comedic to a dramatic moment was not a problem for Marney. I’d like to see more from her and I hope I do.

You’ll treasure watching Tom McLaren’s Walsh. Tom, a Theater Artists Studio member has opened several plays there and is thrilled he’s part of their 13th season. He’s played some incredible roles outside of Walsh, including Atticus Finch in ‘To Kill A Mockingbird’ and George Bailey in ‘It’s a Wonderful Life’ and has received three ‘Zoni’ nominations. A ‘Zoni’ is an award for theatre excellence. His enthusiasm for the studio and the parts he chooses shows in his strong portrayal of the characters. His comedic timing, especially playing off Marney Austin’s Rose, comes from years of experience that were obvious to the audience. As Walsh does, Tom commands the room when he speaks. He’s compelling to watch, and it comes from great confidence in knowing Walsh, trusting his co-stars and believing in himself that you can’t look away.

Jason Isaak plays Gavin Clancy, a writer hired to be a ghostwriter to finish a novel that Walsh hadn’t completed before his death. You can’t help but detect a certain magnetism he exudes when on stage. He’s dynamic and though he’s only been with the Studio since 2016, you can see that he’ll be a part of it for a long time to come.

Which brings us to Julie Lee, our final cast member. She plays Arlene Moss, friend to Rose. Like Marney, she, too, has directed and produced for the studio. She owns DYNAMIC! Productions with her husband, Don Woodard and has been involved with the Studio, one way or another, since it came to be. Her Arlene ends up being someone you weren’t quite expecting to meet and Julie’s exuberant, spirited and passionate take on her, is not to be missed.

All four actors do an exceptional job bringing the story of a woman who spent all of her money on clothes instead of essentials who, at the breaking point, gets an opportunity of a lifetime via the man she can’t let go of. She gives an opportunity to a new writer and ends up playing matchmaker at the same time. By the end of the story, it’s she who, once again, finds herself with her true love.

The set was great and never seemed to get old. Though the stage wasn’t large, it wasn’t small either and it felt very much alive. The staff is pleasant, and the intimate theatre will have you excited to be there; thrilled to be a part of it… so much so that as the lights go down you’ll be wiggling in your seat. Check out ‘Rose & Walsh’ tomorrow through Sunday! It’s your last chance but be sure to pick up a brochure regarding the rest of the season.