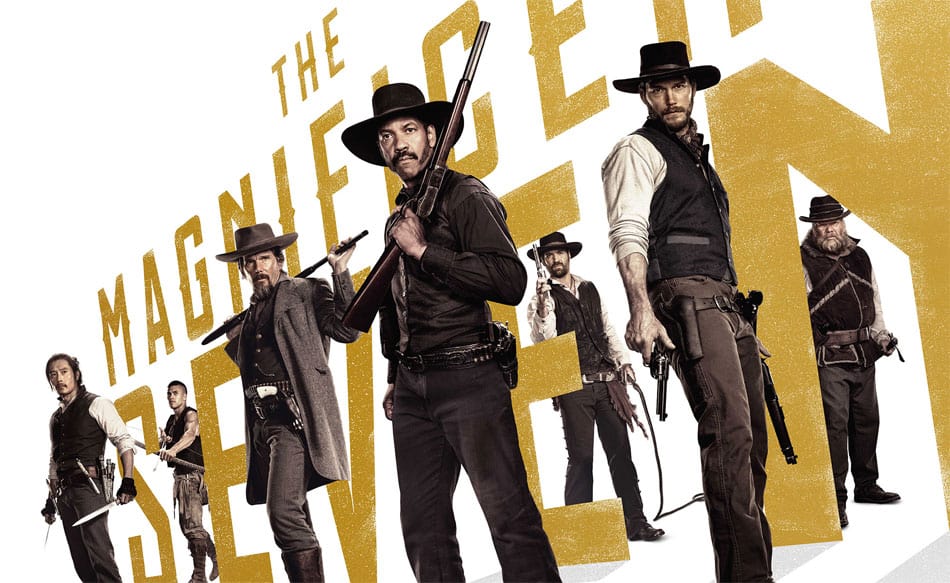 Pity the poor remake. So many people think that the remake is never as good as the original. But in this case the very first original was ‘The Seven Samurai’, then remade as ‘The Magnificent Seven’ in 1960. And now comes along a new take on the old Western story, with new a new cast and a fresh look.

As the Civil War has ended, a little town in Northern California is overrun by a mean-spirited land baron named Bartholomew Bogue (Peter Sarsgaard). The people of Rose Creek sit between him and a lot gold in the local hills. Emma Cullen (Haley Bennett), whose husband was shot in cold blood by Bogue, finds and hires a protector.

She meets up with Sam Chisolm (Denzel Washington), a bounty hunter. He knows of Bogue and has had his own troubles with him. Chisolm finds a small group of hired guns to help him fight the wicked army of thugs that Bogue will bring to town.

These include Josh Farraday (Chris Pratt), a gambler; Goodnight Robicheaux (Ethan Hawke) who is a sharpshooter and his partner Billy Rocks (Byung-Hun Lee), an expert with knives. Also in the group is Jack Horne (Vincent D’Onofrio), a bear of a mountain man and a tracker: Vasquez (Manuel Garcia-Rulfo), a Mexican outlaw, and Red Harvest (Martin Sensmeier), a Comanche Indian. 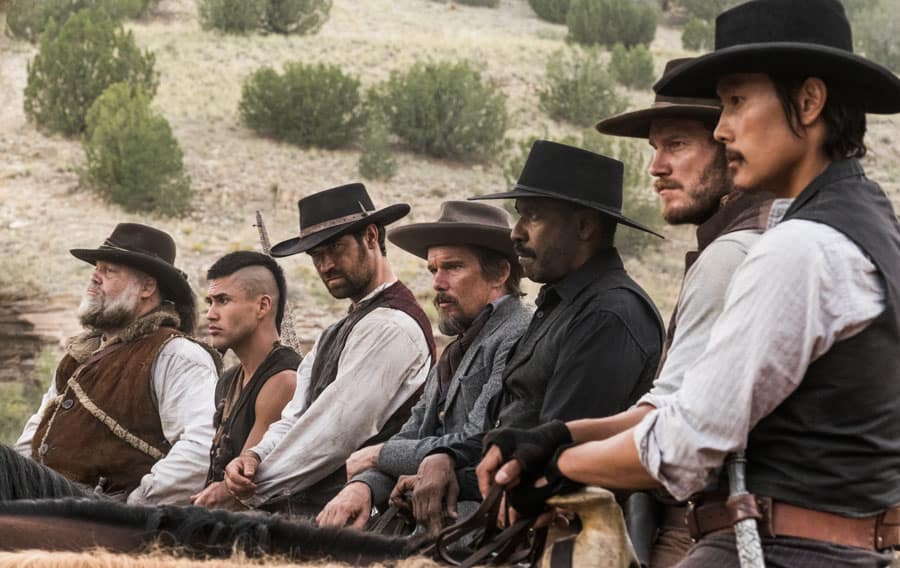 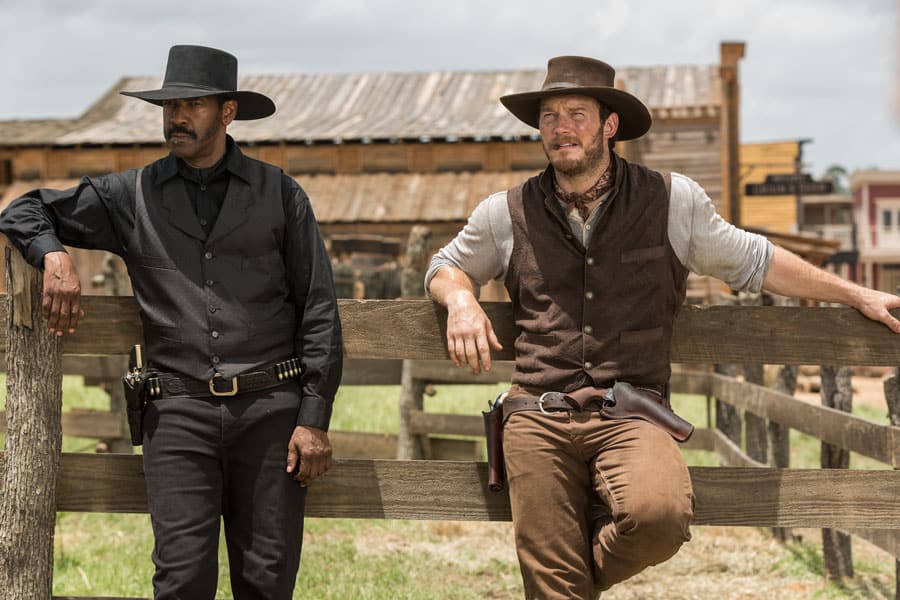 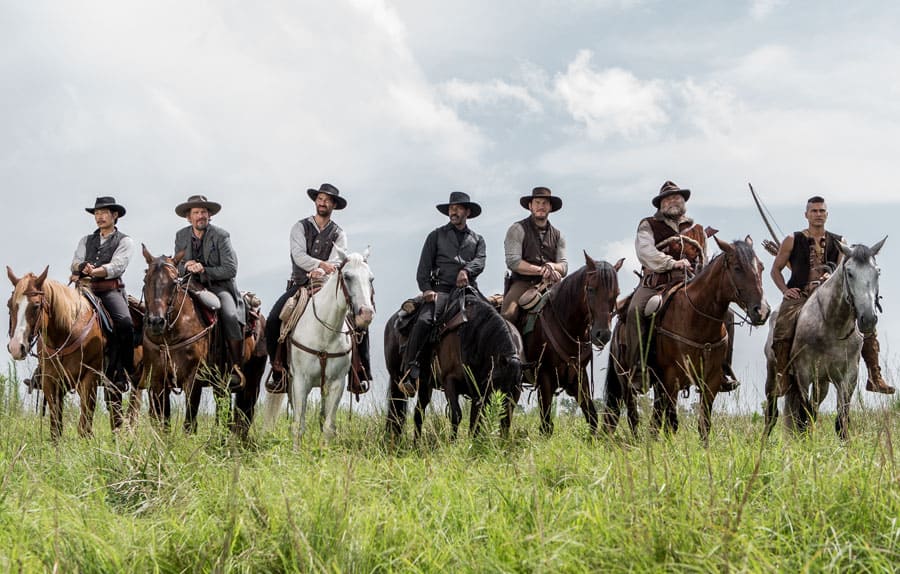 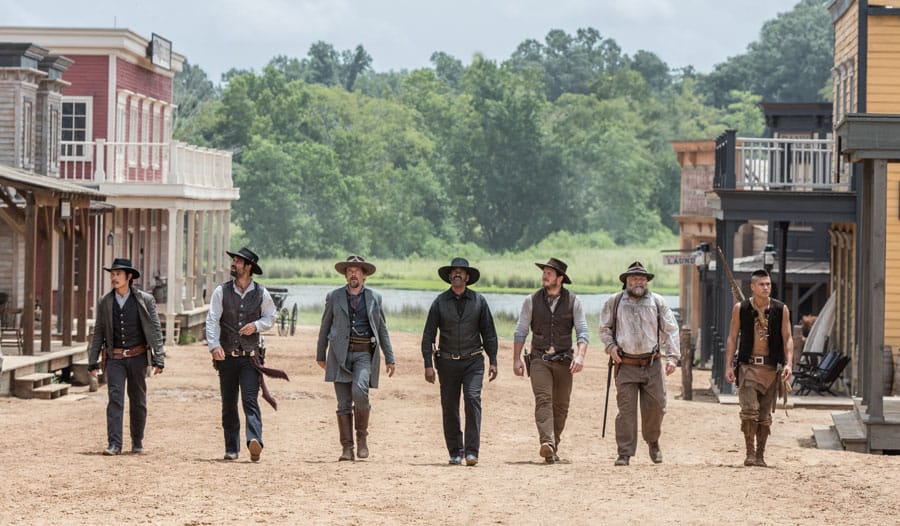 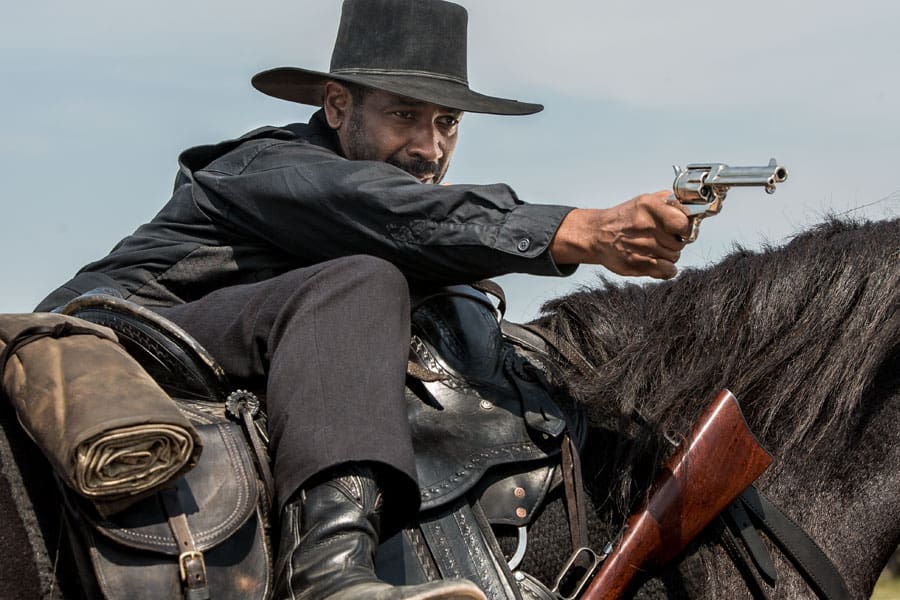 Once these seven men come into town, they meet up with local sheriff and a group of Bogue’s men. There are over twenty thugs to take on the much smaller group. After a tense stand-off, there is major gunfight in the town streets. The Chisolm group survives and comes out on top.

But there will be a much bigger battle that is yet to come. The Seven all fortify the town and train the local townsfolk to take up arms and fight the good fight. Bogue has much bigger plans in mind, with a huge group of ornery thugs and much more sophisticated weapons at hand.

With a large ensemble cast, it can be tough to get a very precise idea of every character. But Denzel Washington has such a calm and soothing presence, he can make you believe that anything is possible. Chris Pratt does his comic relief best, being a funny character with a very good aim and a love of the bottle. Ethan Hawke does a terrific job with a Civil War Confederate rifleman who has seen one too many battles.

Everyone else is also very good in the roles they play, with each having a key scene or two that give their character a better depth. Some of the have a lack of times, this limits how well the audience gets to know them.

A few of the choices are a tiny bit off the mark, such as the voice used by Vincent D’Onofrio as Jack Horne. It is high-pitched and squeaky for such a big bear of a man. Also, the costuming for Haley Bennett seems a little too much Victoria’s Secret for a plain wife of a rancher.

But these are tiny little issues compared to the beauty of the background scenery, the wonderfully stirring score (the final work by James Horner), and the fantastic action sequences in the gunfight scenes and the final battle in the town.

This might not be your father’s ‘Magnificent Seven’, but you can depend on these guys for a rollicking good time…