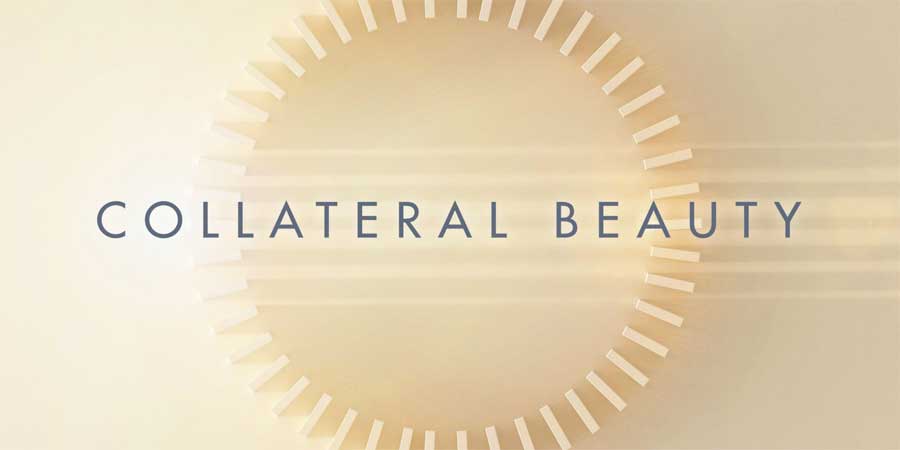 Going to the movies has always been a wonderful experience because they are a way for a person to get away from their lives… possibly from big problems in their life.  Movies offer an escape for you to get to be someone else for awhile or at least push reality aside for a bit, right?  In “Collateral Beauty”, Will Smith plays Howard, a man in such deep pain, you hope that he will leap from the screen and the two of you go find a joyful comedy to watch.  Don’t get me wrong, I’m not necessarily saying the movie isn’t worth seeing at all, but maybe take some antidepressants before you go if you do.

“Collateral Beauty” is written by the very adept and creative, Allan Loeb, who has scores of credits to his name, so with David Frankel directing, the story is in good hands.  He has won an Emmy and an Academy Award and he directed “Devil Wears Prada” but then we should remember he also directed “The Big Year” so it’s hit or miss.  I think this time it’s a miss… more or less.  The trailer misleads you to a point but in the end, I think that was wise; it got you to consider going.

Howard owns a company with his friends, Whit (Norton), Claire (Winslet) and Simon (Peña).  Howard is the driving force for the company and when his daughter dies, he checks out of life and being involved at all in the company.  Of course, things begin to go south.  Howard has 60% of the voting shares and, even after being begged to, he will not help save the business.  Without Howard’s initiative and his innovative spirit, not to mention his vote, Whit, Claire and Simon, who have their entire lives and well-being riding on an upcoming offer, do not stand a chance of surviving the impending failure of the company.  What makes this film ultimately a DVD watch only is what happens next.  Howard’s friends and partners, knowing he’s struggling with depression after the tragic loss of his daughter, want to, for all intense and purposes, do away with him.  That’s appalling!  But watching Howard walk around totally lifeless and staring off into space, unless he’s setting up dominoes, which is explained later but still doesn’t have true function in the film, perhaps you would, too.  The dominoes are a symbol for breaking down walls but nah… I’m just not buying it.  The time spent on those dominoes is painstaking to sit through, too, but then so is my mentioning it for this long, so I’ll continue with the review.

Howard believes there are three things that connect everyone on earth and those are time, love and death.  Not particularly happy with his time anymore, losing the one thing he loved most and wishing to die but still existing, he writes a letter to the three of them.  The knuckleheads in the office have been scheming and hired someone to follow him.  She brilliantly retrieves the letters from the mailbox he dropped them into.  Now partaking in a federal crime, the three of them take the three letters to three actors.  Three… I’m sensing a pattern here.  The actors played by Knightley, Latimore and Mirren are offered a unique opportunity to represent one of the words and confront Howard with the letters he wrote.  As well intended on recreating “It’s A Wonderful Life” as Allan Loeb and David Frankel, as well as the three actors playing death, time and love are, the story of a man losing a child but then choosing to give up everything else that might give his life some meaning, simply doesn’t makes sense.  He refuses help, he can’t say his child’s name… it just doesn’t add up.  You’re more or less frustrated through the entire film.

There are a few glaring twists that make it a see it on cable or DVD watch, but I wouldn’t recommend spending your hard earned money on running to the theatre this weekend.  I do think that Smith, toward the end, Mirren (always delightful) and Naomie Harris’s grief support group leader, Madeleine, sort of lend the film more purpose but the more I thought about it after seeing it, I wasn’t impressed at what they were trying to accomplish and that was a big emotional response from you and some tears.  If you lay down ten or more dollars at the theatre this weekend, the response and tears will more come from you asking, ‘why did I spend the money for this?’, than from the film itself.

When a successful New York advertising executive suffers a great tragedy, he retreats from life. While his concerned friends try desperately to reconnect with him, he seeks answers from the universe by writing letters to Love, Time and Death. But it’s not until his notes bring unexpected personal responses that he begins to understand how these constants interlock in a life fully lived, and how even the deepest loss can reveal moments of meaning and beauty